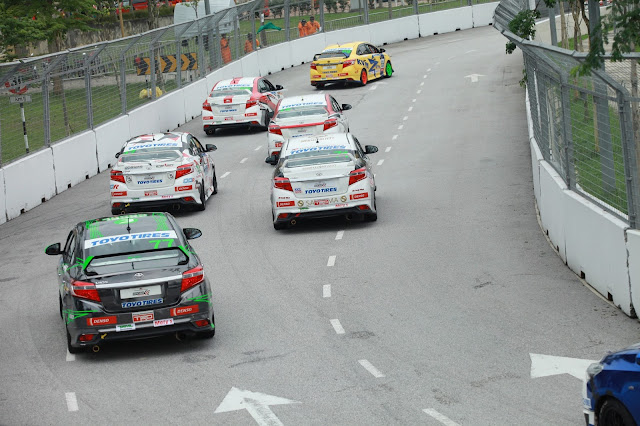 The Toyota GAZOO Racing (TGR) Racing Festival that happened over the past weekend actually became quite a successful motorsport and motoring festival as some 20,000 spectators came to the venue at the Malaysia Ago Exposition Park, Serdang (MAEPS) to soak in the action, thrilling races, entertainment and more. So much energy from what was an event surrounding a one make Toyota Vios race challenge! 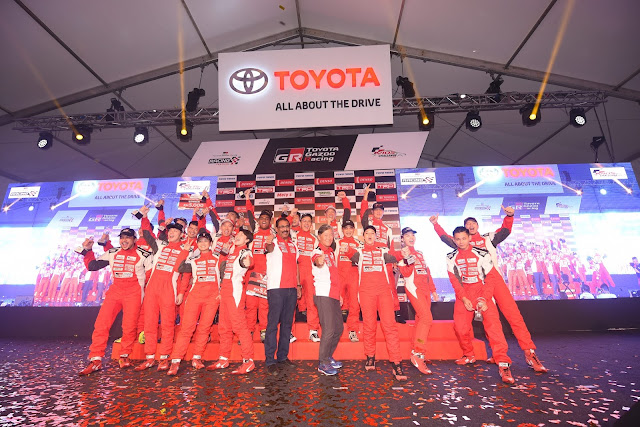 The event had the races, drift exhibitions,  Toyota vehicle test drives and so much more packed into a weekend. There were some local celebrities which turned the event into something bigger for some.

Do read the press release below for the race reports. 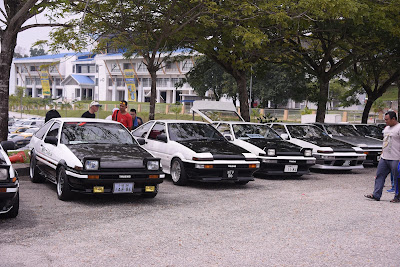 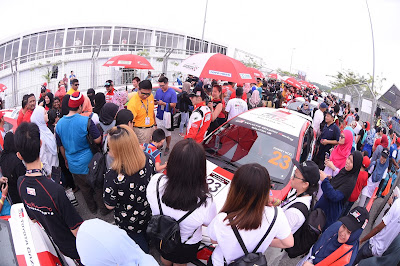 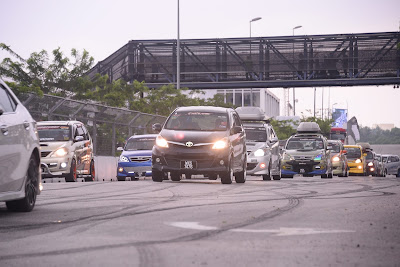 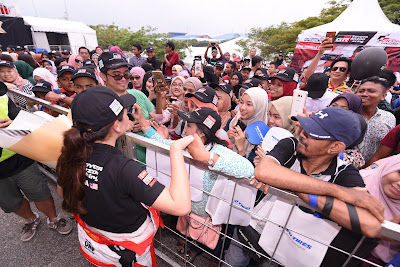 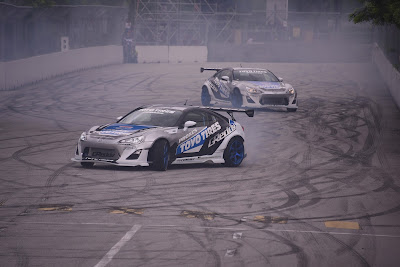 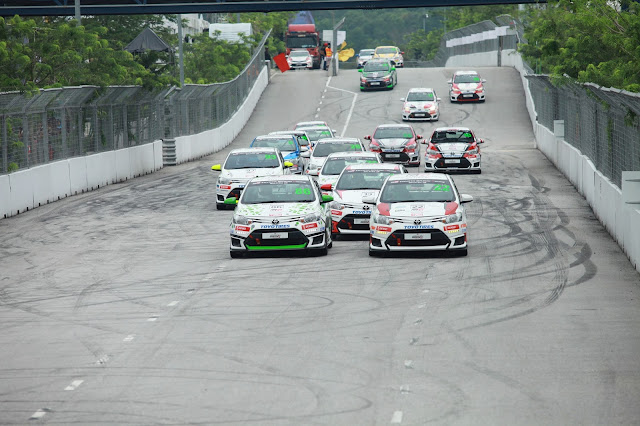 MAEPS, Serdang, 28 November 2017 – The Toyota GAZOO Racing (TGR) Racing Festival that concluded over the weekend more than lived up to its promise as a premier motorsports festival as some 20,000 spectators came to the venue at the Malaysian Agro Exposition Park, Serdang (MAEPS) to soak in the action, thrilling races, entertainment and more.

“The wonderful crowd who came out to join us for the weekend in the thousands made organizing an event of this scale truly worth the effort. I am so happy and thankful for the support that the Malaysian public have shown towards the Toyota GAZOO Racing (TGR) Racing Festival and we are very motivated to continue our efforts to promote grassroots motor racing activities in the country,” said Deputy Chairman of UMW Toyota Motor Mr. Akio Takeyama who also participated as a competitor in the Promotional Category races over the weekend.

Mr. Takeyama also commended the drivers in the Vios Challenge, particularly his fellow competitors who had shown much improvement over their first stint in Batu Kawan. “I had some very exciting and close racing with my fellow competitors this time around and I can see that there is a vast improvement in everyone’s skills. This is what motor racing is about; to constantly improve by pushing our own capabilities,” he added.

The Vios Challenge races featuring some 40 drivers competing in identical Toyota Vios 1.5J running in three categories the highlight of the weekend. The action was electrifying as the circuit snaked 1.9km around the grounds of MAEPS and proved to be both challenging and exciting for drivers and spectators as it featured no less than five elevation changes in the course of the 17-turn circuit.

The races lived up to their thrill-a-minute billings as crowds were riveted to the big screens around the circuit and the roar of the tyres could be heard throughout the event grounds as the competitors tried their best to prove their capabilities in identically-built cars.

The Sporting Category made up mainly of drivers who are new or had never won major races prior to the Vios Challenge offered some of the best racing action in the weekend. The balanced nature of the cars meant that drivers were quite evenly matched and had equal opportunity to take the win. This was evident by the close lap times posted by the drivers throughout qualifying.

This led to the surprise of the day when Brendan Paul Anthony, a new-comer to saloon car racing and first time participant in the Vios Challenge topped the time sheets in his Dream Chaser-entered car during qualifying and took his car to a maiden win in Race 1 ahead of his experienced competitors such as Brandon Lim, Ken Foo, Kenneth Koh and Clement Yeo.

Race 2 however saw the tables turned on the newcomer as it was Patrick Tam of Team Nanoplus who battled all the way with Brandon Lim of Tedco Racing on the dry track. This left the younger Brendan to settle for third and his second podium finish of the weekend.

In the Promotional Category, what appeared to be another run-away weekend for points leader and beatboxer Shawn Lee was not meant to be. He once again put his car on pole and also took the first race on Saturday with Shukri Yahaya and Danny Koo finishing in the same order as they did in Batu Kawan but for Race 2, it was a very different outcome.

A rare mistake going into Turn 6 sent his car into a half spin. He had to wait for the whole field to pass before he could rejoin the circuit, dropping him to the back of the field. This allowed Shukri to pull away with Danny in tow. Diana Danielle was having the drive of her life and pushed hard to secure third position and in the process became the first lady to stand on the Vios Challenge podium.

The thrill of the weekend and the race that most of the audience had waited for was for the premier class Super Sporting category. This was made up of the top drivers in the country and with no quarter asked or given, sparks were flying from the very first race on Sunday morning.

Denying Tengku Djan of his pole position, Mark Darwin pulled away well from the first spot and began closing the angle into Turn 1. However, Djan firmly held his line. The pair touched, sending Darwin into the wall and ending his race. The AAM stewards ruled that it was a racing incident and allowed Djan to continue for the restart. Akina Teo of Team Mudah Racing was another victim of this melee and retired back to the pits.

With no one beside him on the grid, Djan pulled away cleanly at the restart but the impact from the altercation saw his rear bumper slowly dislodging itself and by Lap 4, it was loose enough for the officials to pull him in to the pits and ending his run at the front. This handed William Ho the lead with Mitchell Cheah and Ser Meng Hui in podium positions. Mitchell took a dive into a right hander but William resisted, pulling off a side skirt. Meng Hui of MMCS Sport took the opportunity to claim the lead which he held till the end.

Mitchell had a 15 second penalty for jumping the start and was demoted to sixth. William also had to call into the pits to remove the flailing part and this allowed Syafiq Ali of M7 Racing Team and Boy Wong of ST Wangan to fill the remainder of the podium positions.

Race 2 was no less dramatic as heavy rain delayed the start of the race for an hour. With the top six in reverse order on the grid, Mitchell found himself on pole with Djan beside him. The young man remained a picture of calm as the Prince of Drift made an effort to hassle him from behind. They touched numerous times with Cheah half spinning on two occasions but all to no avail. Their actions allowed Rainmeister William Ho to close in on the pair and when he sniffed at an opening, he dived inside on Turn 16 to push Djan wide.

Djan was having none of this and the pair exchanged paintwork up the hill towards Turn 17. The move broke Djan’s rim and put him out of the race while William himself had to nurse a puncture. He was further docked 15 seconds for his move on Djan but managed to finish third. Mitchell Cheah took a deserving win ahead of Boy Wong who had a quiet but consistent race.

Equally thrilling were the drift demonstrations by Japanese world champion drift drivers Masato Kawabata and Hideyuki Fujino who performed some remarkable precision drifting in their Toyo Tires Toyota 86 drift cars. Performing their drift shows on the main track, the crowds were thrilled by their amazing car control, bringing their cars to within inches of the protective walls.

With Toyota’s All About The Drive tagline, it would be amiss not to have the range of passenger cars on display as well as for prospects to experience. One of the main attractions in the car showroom was undoubtedly the C-HR that never fails to attract much attention from visitors everywhere it goes.

Apart from the test drives, visitors were also given the opportunity to have a thrill ride in Toyota’s legendary 4x4 models namely the Hilux and Fortuner. A specially-constructed obstacle course was erected on the grounds and members of the public were allowed to ride these off-road machines on side ramps and a high hill, showcasing the amazing capabilities of these vehicles.

The crowds were well cared for as well as over 20 of the city’s top food trucks were invited to serve the hungry spectators throughout the weekend. The wonderful smells of delectable local and international cuisine permeated throughout the festival grounds and kept visitors coming back for more.

With a more compact layout than the event in Batu Kawan, the Toyota GAZOO Racing (TGR) Festival event grounds were abuzz with spectators who were able to catch the on-track action as well as the carnival activities, particularly the activities in the main stage where there were games, dance and percussion performances and of course appearances by the numerous celebrities.

The Toyota GAZOO Racing (TGR) celebrities namely Danny Koo, Diana Danielle, Fattah Amin, Geraldine Gan, Janna Nick, Shawn Lee, Shukri Yahaya and Venice Min made regular visits to give away goodies and to take wefies with their fans. They also had the crowd in stitches during their stage interaction games.

Joining them on stage were the celebrities from Media Prima’s Drama Sangat bus and these included Bell Ngasri, Chacha Maembong, Izzue Islam, Johan Ashaari, Nad Zainal, Puteri Aishah, Raja Afiq and Zoey Rahman who kept the crowds well entertained and gave away loads of prizes to their fans.

“It was a very exciting weekend of high quality racing action. I thoroughly enjoyed being there to absorb the sights, the sounds and the smells that celebrate what a day out to enjoy motor racing is all about. I am also grateful to the fans who braved the afternoon downpours and stayed all the way to the end with us. I say a big terima kasih,” said President of UMW Toyota Motor Mr. Ravindran K.

The Toyota GAZOO Racing (TGR) Racing Festival remains one of the biggest motorsport carnivals in Malaysia and it will be making its way to Medini Iskandar in Johor next. Fans should not miss the opportunity to catch all the action, thrills and rewards when the event heads to Johor in January 2018. Look out too for the official announcement of the Toyota Vios SE grand prize winner which will be made on UMW Toyota Motor’s official communication channels on 7th December 2017.

For further information, members of the public should follow Toyota GAZOO Racing Malaysia and UMW Toyota Motor on their homepage, fb and instagram.