The other day a friend was happily chasing down a 2008 mk5 VW R32 with his 2007 Audi A4 2.0TFSi on a trip to Penang. Both cars were loaded with one passenger each and was basically down for a weekend trip. The VW R32 is a rorty sounding V6 powered Full Time AWD car with around 250bhp on tap running through a superb DSG gearbox. The Audi A4 is a 4 cylinder 2.0 Turboed car with around 200bhp powering its front wheels via a CVT transmission. Now what happened on the was that at all speeds, the R32 could not pull away from the A4. Amazing 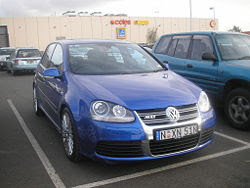 isn’t it? The ultimate Golf cannot pull away from a 4 door mid range Audi.

It got me thinking. Then I also realised. Let’s put all factors in play. The R32 weighs 1538kg empty. The A4 weighs a measly 1430kgs. There is a 108kg difference here. Add both drivers, 80kg and a passenger each at 80kg and some luggage I’d say the Audi is still a good 80kgs lighter. Now we measure power to weight ratio. The R32 has about 162bhp per ton against 139bhp per ton. Yup, it shows that the R32 has a 23bhp advantage over the A4 2.0. It isn’t much is it? When you put the numbers in. Of course in Sepang that could be a 2 second per lap advantage on average.

Now we factor in the fact of transmission loss into the picture. We know that AWD usually losses an easy 20-25% of its power through transmission loss. A FWD would lose only about 7-10% depending on the type of gearbox used. Usually a CVT loses a lot due to it having a basic rubber band/chain system (like a racing bike type gear system) and it has lots of slip and loss here and there. So we will now state that the R32 will lose about 22% of its drive due to the transmission and the A4 will lose 10% due to the CVT. The R32 is then estimated to make 195bhp at the wheels and the A4 180bhp at the wheels. So, in other words, the Audi only loses out 15bhp to the R32. Amazing. I also have to add the fact that I have never known a turboed car to actually make what is said in its manual. I think that A4 may have a few more horses north of 200bhp from the factory. The owner may be lucky. But most Turbo cars are usually pumping out slightly more than quoted.

We haven’t factored in gearing. We also have to note that a Normally Aspirated Car like the R32 would thrive on revs and to actually DRIVE the car, you’d have to be extremely silly. I.e. If you’re in a manual, you’d probably be in 2nd gear while the Turbo is in 3rd. We also don’t know how VW actually geared the R32.

It is geared for the Autobahn? Then you’d only see that car coming into play at about 200km/h, which is actually a speed that is nearly impossible to maintain on the 2 lane stretch of the for more than half an hour. In Sepang I’d say the R32 would be the faster car. But in the real world, OR Malaysian highway driving. 15bhp wouldn’t make a darn difference and that’s why the R32 couldn’t and wouldn’t pull away from the A4. To the guy who bought the R32. Tough luck. But at least it sounds superb. Maybe that’s the actual reason to buy the R32.

Posted by Rigval Reza at Thursday, May 22, 2008 No comments: Links to this post

Drive experience: You Can Blame Everything Bad in Malaysia on a Dead Dictator and We Look At The Original Mini 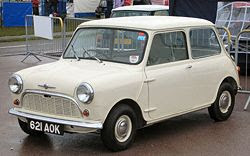 I think we should all blame Adolf Hitler for everything wrong in today. We can blame him for the high price of petrol, cooking oil, rice, cockroach infested mamak stalls, ugly looking flower horn fishes, badly designed cars and the volkwagen beetle owning Malaysians who love that car, not that there’s anything wrong about the car but the fact that is was Hitler who actually gave the green light for the Beetle project in the first place. This is because Hitler is the universal villain whether he likes it or not. And also for the fact that everyone who’s a politician with the rulling party is pointing fingers at everyone else or trying to be a hypocrite and saying nothing about it whatsoever even though he can do something about it. So, the best thing I would suggest all people who are into politics in is to blame a dead dictator for any wrongdoings in the country. You have also Mussolini, Idi Amin, Rasputin and a few other famous people to choose from if you don’t want to blame Hitler for it.
Read more »
Posted by Rigval Reza at Thursday, May 15, 2008 No comments: Links to this post

Proper shoes to drive in

You can click on the title above to find out what proper driving shoes should be like. Of course you can drive with your 12inch platform shoes. But you may kill someone while driving with them on.

Click on the Title or Look at the LINKS section for details.
Posted by Rigval Reza at Wednesday, May 14, 2008 No comments: Links to this post