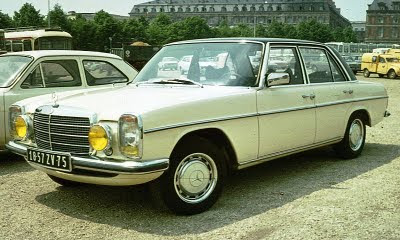 A couple of weeks ago I tried a Mercedes. It was no ordinary new or nearly new Mercedes Benz but one that was as old as I was. At 37 years of age I am at the phase of life where running up a flight of stairs isn’t normal to do, or running for the sake of just running isn’t something we thirty-somethings would usually do. Although I do occasionally do try taking a flight of stairs in leaps and bound of two or three stairs at a time, most of the time it’s a step at a time. The body may decide to pull a hamstring or two if it felt it wasn’t warmed up enough to do the measly job of running up a flight of stairs. That’s being a 37 year old dignified bum and not Michael Schumacher.

Now the Mercedes W114 230.6 I tried is worse than I am right now in my mid to late thirties. At least I can still hop, skip and occasionally jump. But a 1974 230.6 is a very sedate ride to drive around in. Entering the car, starting it up and driving the darn thing for the first time is an experience from another lifetime, era, dimension, timezone or whatever word that reflects the difference it is from the motoring norm of today. I started up the car, released the handbrake, which was a grab-handle to the right of you and slotted into first. It was super vague and light. No notchiness and not much mechanical feel to it. Could be due to its age and slightly worn bushings. But coupled to its light clutch (yes, a 4 speed manual) it’s pretty easy to move off.

The steering wheel is almost the same thing. A total lack of feel. You would have almost no confidence if you came out from a modern day classic, which although most new cars lack feel isn’t like any experience you’d find. This is probably due to the recirculating ball set up instead of a usual rack and pinion job which you’ll find everywhere. Mercedes only started using the rack and pinion recently (post 2000 onwards) and this being a 1974 model, felt as if you’re steering an arcade game. There is no feel whatsoever of the road below you. It isn’t even like some cars where you’d say that its like you’re running and your soles are jelly, where your body reacts slightly slower than the road surface due to the vague surface. In this case, its like playing a 1980s race car game, you turn the steering, the car turns but there’s no feedback whatsoever from the road. It’s unnerving at speeds above 80km/h. But you eventually get slightly used to it. Now if you complain that the Subaru Impreza has a slightly vague steering compared to the Lancer Evolution, wait till you try this sucker on. The Impreza after a W114’s power steering is full of feel, like a Porsche 911’s, epic, superb, incredible, a paragon of modern engineering. So, everything’s relevant and subjective. We have it so much better than the 1970s.

Now handling is totally affected by the vague steering.. Due to it being a recirculating ball wheel, its also slow in its responses. Somehow, you’d adapt to the vagueness of the steering and turn like what you’d turn in a super tanker. You turn the wheel 3 to 4 days in advance of the corner you’re about to take. But all in all, you somehow manage to adapt to the slow and ridiculously steady pace of driving this car. This is what wafting is all about. Things are done slow, steady and winning does not matter. Arriving in style (or a few centuries too late) is what matters. You cruise around the roads of Kuala Lumpur is a style that’s long gone for this cosmopolitan city of about a million or two worth of residents. It reminds you of an age where you don’t rush anywhere. Everything is about quality and not quantity.

The 2.3liter 6 cylinder engine is a nice old school in line or straight 6 engine. It has ample pulling power and while slightly smokey due to its age, still had ample torque to pull it out of corners. Being a six, it is smooth for its age the car would easily cruise at 90km/h all day long without feeling stressed. The 4 speed manual could do with an overdrive, but in the early 1970s, this was the norm. Auto was a pricey option that not many took.

You tend to treat a car as old as this with a certain amount of respect. The same amount of respect you treat an 80 year old guy in a wheelchair. But the great thing about this old Merc is that it still is a sensible drive in the jam packed roads of Kuala Lumpur. Why so? It’s a Mercedes, it doesn’t overheat at the first semblance of a traffic jam. It’s built like a vault, meaning it’ll outlast you and will still be a fit old 80 year old car when at the age of 80 you’ll be in a wheelchair or a walking stick hobbling around slightly deaf and shouting loudly at other people thinking they’re deaf too.

Yes it doesn’t drive like that old MGB GT I once drove. The MGB was a sports car of its time, its steering responses are still fast to this day. This was because Mercedes was building a competent sedan, and not a sports car. Its slow steering meant that passengers won’t feel as if they’re riding in a dodgem car. The slowed responses, smooth ride cossets them, makes them feel good after hours in the car. Everything is sensible. So sensible that after 36 years of age, it still is a good nearly modern classic car to own. A W123 Mercedes would be an even more sensible buy with its more modern driving style but if you really want a big grille with vintage style lights, and lots of chrome bumpers, this is the one to get. I liked driving it. Slow, and dull witted it may be, but an experience nonetheless.

Note:W114s and W115 are essentially the same late 60s early 70s mid-sized sedans. The 114s are those equipped with 6 cylinder engines and the 115s with the smaller 4 cylinders ones.
Posted by Rigval Reza at Monday, August 10, 2009 4 comments: Links to this post

Driving Pleasure:The Reason for Lack of Articles on this Blog

I've been a litte busy taking a break from writing. During the last month or so I've made the following road trips:

1. KL-IPOH-CAMERON HIGHLANDS (via Simpang Pulai) - KL (via old road to Tapah)
2. Two road trips to Muar in Johor. One of which in a Suzi Swift 1.5 which has amazing cruising ability by allowing us to travel from Tangkak to Seremban R&R in a mere 45 minutes.
3. A trip to Bukit Tinggi
4. KL-PENANG (Batu Ferrenggi) -KL via Simpang Pulai to CAMERON again and down via old road to Tapah -KL.

All in a month or a period of less than 6 weeks.

The driving experience was priceless. Especially the trip to the Highands. The weather was fine on both trips up and down and the Scooby TS was amazing. It's little engine easily hauling its arse up the windy roads to Brinchang and yes, there was a lack of power most of the time but you know that the chassis (on TEIN springs and front and rear strut bars) seems to be optimised for mountainside roads. Driving and attacking mountain roads is an experience that I somehow will never be bored of. I wonder where next?

Oh yeah. Tires. It seems that due to my extensive travels, I happen to run through a set every 8 to 9 months or so. I suppose this fact isn't healthy on my pocket. Hence the fact that I have to run, as some of my friend's put it, 'salesmen' tires. But being 215/45/17, it'll run me close to a thousand Ringgit on those with alignment and labour costs.

On another note. The Impreza 1.6TS which I drive just had its road tax renewed for its forth year. That's Four Years of Subaru ownership. It happened to 'reward' me with a cracked radiator sometime last week. I then had to get it fixed of course. Being a 1.6 normally aspirated engine, the radiator is a single core thin aluminium/plastic top thingy which I gladly upgraded to a used WRX STI radiator with a dual core. It is also an aluminium/plastic top thingy, but at least when or if I need to repair it, its already an uprated piece. The great thing about running a larger core radiator is that it has (obviously) more water, and therefore more cooling capacity. I noticed that on hotter days the engine runs as smooth as it does on most mornings. This is a good thing, as heat is an enemy of making power. It was a repair well worth it.

Why I'm writing this is because cars nowadays have this aluminium/plastic mix for their radiators. In those days, 1980s and below cars came withsolid copper radiators that hardly break after 4-5 years (which they do now). They don't make them in wholly aluminium except for aftermarket ones. The real reason for this is that any part that doesn't fail does not make profits for the manufacturer. In this case, radiator manufacturers. They need this part to fail every 5 years or so to keep them in business. Its a curse that will not go away. It's here to stay.
Posted by Rigval Reza at Wednesday, August 05, 2009 1 comment: Links to this post