Proton has gone bonkers: RM115K for a Satria Neo? (UPDATED)

Yes it has OHLINS for dampers and AP Racing for front brakes as well as Carbon Fiber for its bonnet. 125bhp to 145bhp. But RM115K? This is what you get when you spec Rolls Royce grade parts in a Perodua...or then again a Proton.


When they came out with the earlier Satria R3, I commented on zerotohundred.com that they spent so much money on the seats that it cost half of the extra amount of the price. I.e RM63K to RM78K and RM8K for the seats. The boys at R3 joined in the thread, and were miffed, a little. Now, they’ve basically binned the RECAROs for normal seats and threw in a lot of goodies. Looks like I was quite right in the end. Now, after a few years, they've come up with a street tabby cat that wears a diamond studded collar. Going by the cost of the parts in this new car that's exactly what it is. No doubt the parts are fab, but the price?

Yes. BMW are miffed by the fact that their 1-series customers think that the front wheels drive the darn thing. Click on the title above to read the article. It is posted on myautoblog.org.
Posted by Rigval Reza at Sunday, March 28, 2010 No comments: Links to this post

I was bored earlier today....and look what happened because of it. 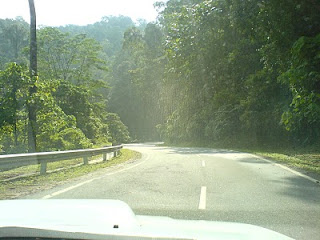 Today I was a little bored. I was bored so when I arrived at Jalan Pahang from Kelana Jaya in Petaling Jaya I decided to take the long route to my office near Wangsa Maju; Jalan Pahang – Jalan Gombak – The Old KL-Bentong road – Genting Sempah/Karak Tunnel – Karak Toll – Middle Ring Road – Wangsa Maju. It took 45 minutes. Half an hour of hairpins and bends, albeit a little slippery since it rained heavily the day before.


I love this stretch of road. It is narrow and extremely challenging if you're wringing it. I wasn't. It was wet so I took it easy. Pushing it when its slightly damp and when you're alone on a road that does not have barriers and ravines on one side you tend to take it easy. But this is MY level of easy. So it still is a little fun with the little Impreza TS  about to lose grip on the more slippery corners. A slight understeer informs me that I'm overcooking it. Slight understeer is good when there's a ravine right beside you. So being sensible I slowed down.

Anyway. 45 minutes was all it took. About 30 minutes to Genting Sempah, and about 15 minutes back to Wangsa Maju. Which was decently fast, owing to very little lorries and traffic. I only encountered three going up to Genting Sempah.

When I was 19 and first started driving, I used to drive along the old KL-Bentong road on quite a regular basis. It was way quieter then, no houses past the twelfth mile (Batu 12) Jalan Gombak. There was even a steel Bailey bridge somewhere after that. The bridge doesn't exist anymore due to development. The same with the Ulu-Yam stretch. But I never actually finished either stretch, both led to Genting. It was usually a 15 to 20 minute slow drive in the evenings for me during those days where I'll hang out with a friend or two somewhere in between Gombak and Genting Sempah and just pass time. In those days, the early 1990s,I used to live in Gombak and then in Ampang. So these roads were like a short 'makan angin' drive for me. It was my playground. As was all the roads around Selayang-Gombak-Ampang-Cheras.
In those days the Middle Ring Road 2 was just a dual carriageway. It was actually a proper B-road if you wanted to put it mildly. After Taman Melawati there were no development till Ukay Heights. So this road was basically a river to the right (If you came from Melawati) and the jungle to the left. The road had some sweeping corners but nothing drastic. But people still had accidents there. As with most dual carriageways but that's beside the point. So traveling from a friend's house in Gombak to my house in Ampang in the early 1990s was a somewhat serious B-road jaunt. Many impromptu car races were fought by me and my little 2nd Generation Honda Civic there. Some I won, some I lost. So when I basically grew up and started work I couldn't see the relevance for me to keep hitting these roads for the sake of driving as they were my playground before it became a motoring pastime. It was only in the last five or six years or so I've actually took up driving purely for the pleasure and returned to these roads. It is a back to basics thing for me. And it has culminated into this latest trip and into this article. A Mastercard moment. Ergo, extremely priceless. 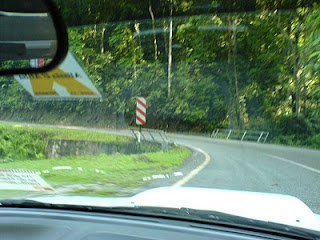 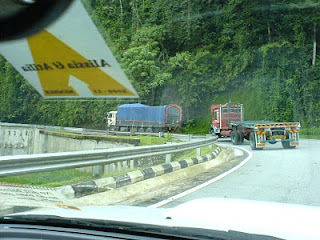 I met with only three lorries going my way... 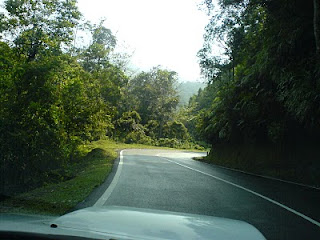 pretty tight and slippery...you can't tell from the pics. 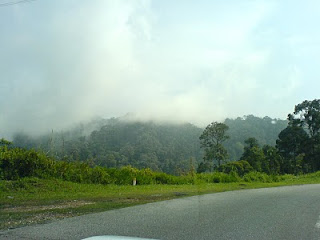 Karak Highway somewhere down below 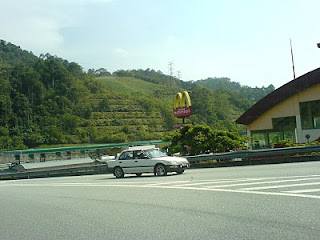 ...Genting Sempah....and NO I did not stop for a burger 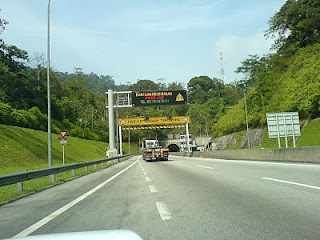 ..back through the Karak Tunnel... 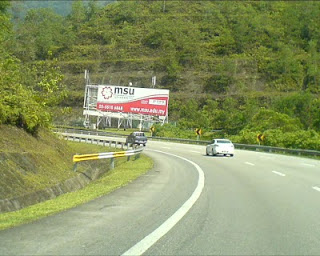 A white Mazda 3 taking the downhill sweeping corners at around 120km/h. I was doing a relaxing 90km/h.

Odd ramblings on the Alfa Romeo Mito, the Mazda 2 sedan and my own Subaru Impreza 1.6TS 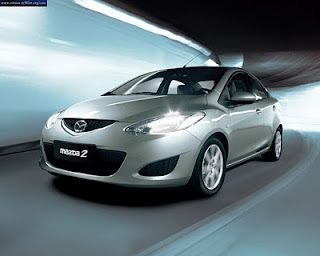 I recently had the opportunity to go try the Alfa Romeo Mito and the Mazda 2 sedan recently. The reason I wanted to try the Mito was that I was itching to get my hands on a new Alfa as I basically love Alfas. I tried the Mazda 2 sedan because the wife and I have decided to go look for a second car again as the need for one has arisen. No, the Alfa is manual and waaayyyy beyond what we intend to spend on a car.


Firstly, I loved the Alfa’s look and if it were down to looks I would buy it without a thought over the BMW Mini. However, as I wrote earlier, it handles like a high mileage shopping trolley from TESCO. The chassis is unresolved, steering vague and uncertain at different speeds and a chassis that does not work with the driver as well as I would have liked. So, I was disappointed. Another RM155K sporting car that I cannot buy. The reason I said that was that this figure is around the amount that I am willing to spend on any car if I wanted to upgrade from my trusty battle scarred Millennium Falcon like Impreza 1.6TS. It basically is a basic family sedan with some custom mods that, like the Falcon could do the Kessel run under 12 parsecs. If you are a Star Wars fan you’d know what I’m babbling about here. Actually its not that fast. It just handles simply sublime. Anyway I am just babbling here.

Secondly the Mazda 2 Sedan or Hatchback will sell for RM80-85K depending on spec. I tried the Mazda 2 sedan 1.5 auto with the R-Spec rims, 195/45/16 over 185/55/15 and a different front shock settings. It is a decent car to own with very high front end grip. In fact, the little family sedan here has a chassis that is slightly more resolved than the Alfa above although it is a much slower car. But the thing is, it somehow does not have the refinement of the little Suzuki, or even a Nissan Latio at that. Another beautiful looking car, especially the hatchback but it is lacking in some important areas like engine noise and wind noise at higher than normal speeds. Not something good for a family that happens to go on a lot of drive-to holidays like us. Of course we still have the Impreza, but what if we wanted to for the fun of it take the other car?

No, this isn’t about me getting old and that I cannot stand the lack of refinement anymore. Its just that if I went and drove a Nissan Latio to Penang and back I would come out of the Latio feeling better than if I did it with the Mazda. If I drove the Swift to Penang, I’d feel better also and be smiling as there is driving pleasure found here too.So there you have it. The two good looking cars I tried recently have faults.


Expect a longer review on the Mazda 2 sedan sometime soon either in here or over at myautoblog.org. 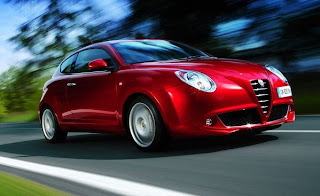 Personalize your Cygnet in any bizarre way you want says Aston Martin. 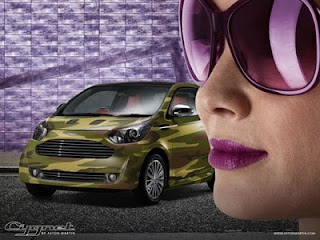 I find this new 'Aston' intriguing. Which is why I wrote about it on myautoblog.org. Something I've written about brand marketing of this sort is in the pipeline. I will post about it in here soon. Hope you enjoy this short write-up and my opinion on what I think actually arose based on a business decision to reduce average CO2 emissions of a certain brand.
Posted by Rigval Reza at Sunday, March 21, 2010 No comments: Links to this post

Oooooo, look here, my review on the Alfa Romeo MITO is on myautoblog.org 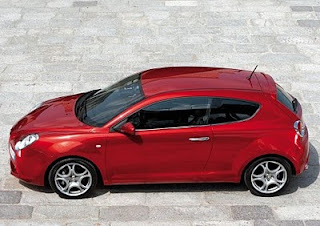 Ah. Looks like my review on the Alfa MITO is out on myautoblog.org. This is a car that looks fantastic for a supermini but drives like a shopping trolley. A disappointing drive, but a beautiful car.
Posted by Rigval Reza at Friday, March 12, 2010 1 comment: Links to this post

The argument against electric cars of the near future 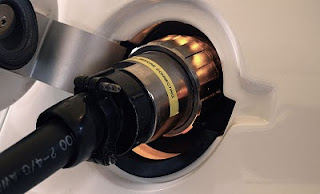 Yes. Another one that I wrote on myautoblog.org. This time about all-electric cars of the near future. I am not buying one anytime soon if you get my drift.
Posted by Rigval Reza at Thursday, March 11, 2010 No comments: Links to this post

Toyota needs to rediscover their fundamentals and stop building Unclemobiles

Hello chaps! Another interesting posting for you to read on myautoblog.org by yours truly. This time about Toyota and how it has lost its plot in trying to be no.1. Actually its nothing new. But this is my take on the matter. Enjoy!
Posted by Rigval Reza at Wednesday, March 10, 2010 No comments: Links to this post