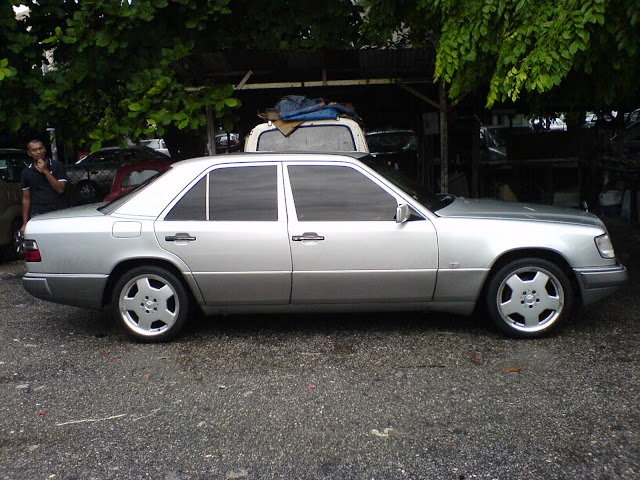 Hello again and welcome to Part II of the Old versus New article. Previously I wrote about the newly facelifted Proton Persona SE Elegance. It is an affordable Malaysian made car which I think is a good car to drive. Albeit with a compromised driving position. The car I drove was fresh out of Proton's car lot and was quite a decent drive. Surprisingly it also felt well screwed together. Cheap, but well put together.This car is something that I would recommend to a person who wants a sprightly drive yet is still looking for this at the lower end of the car buying spectrum. 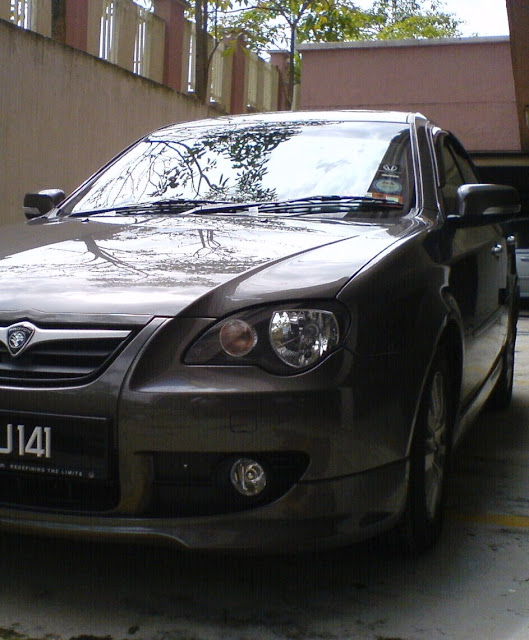 But there is another choice. A twenty year old Mercedes Benz E-Class. The W124 E-class is as I said earlier a future classic, and driving it again after a while is a revelation. The car I drove was a 1990 200E. I sat in it as passenger from Kelana Jaya to a custom body shop in Subang Jaya and then to a signage shop in Shah Alam. Sitting in that car allowed me to appreciate the very simple and austere interior. The 200E had creamish grey coloured seats, standard zebrano wood inserts and a black dashboard. Nothing was out of place or missing. The seats were very comfortable and supportive and the ride was good, even on AMG monoblock styled 17 inch rims on 215/45/17 tires.

When I drove it all around Kuala Lumpur a short while later, from Segambut Dalam/Mont Kiara (Yes, Mont Kiara is actually right beside Segambut Dalam and only the glamorous name separates it) to Pandan, to Kajang and then back to Kelana Jaya. Everything felt tight as the previous owner of the car, my friend's father had changed all the bushings as well as the shocks in the car a few years back (and with very little use back then too). 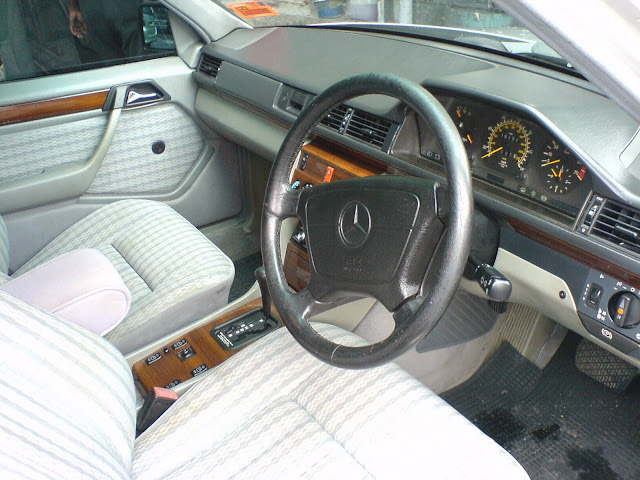 When you climb into the driver's seat you get yourself familiar to the controls, and being a Mercedes it is easy to do so. Everything seems to fall into place, even with that foot operated park brake, the springy two step throttle pedal and that very slow reacting steering wheel. Somehow the ergonomics are spot on as the 200E does not feel like a large car. Maybe because it really isn't compared to Mercedes of today. With that slim and slender (tallish) body with those very slim A pillars it looks like something where styling took priority over safety.

But don't get me wrong, a W124 Mercedes feels like it was hewn from a solid block of granite and feels like it will go on forever. If you recall the Proton advertisement for the Persona that I mentioned in Part I, the difference here is that with the W124 you wouldn't need to avoid those deers on the road, or clip the safety railing or any other stunts as the pregnant lady would only need to run over those doe eyed deers, smash through the railings and destroy everything in its path while safely bringing that lady to the hospital to get her baby delivered. This is the biggest difference in engineering compared to the Persona. 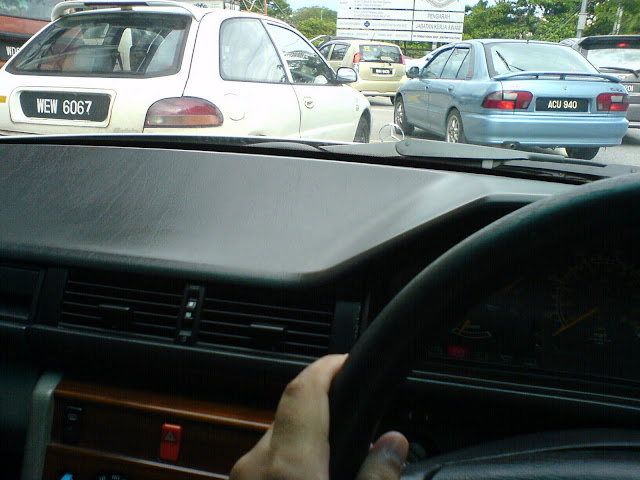 The other thing is that the car needs a different driving style. While it is noted that my demeanour changed as soon as I started turning the steering wheel. Driving the 200E was so utterly relaxing that after a few hours in the driver's seat I still felt as fresh as when my friend and I (and later his cousin) started the journey to all those places mentioned above. I actually hustled this car all for the sake of you readers out there. Really. 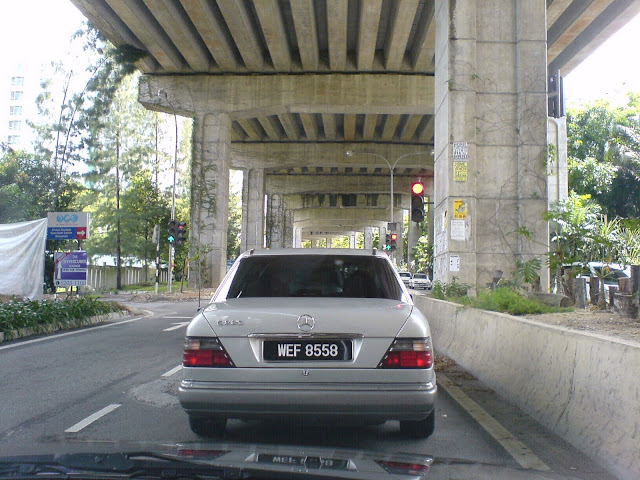 So how is it to actually hustle a W124? Pretty memorable. The first thing you notice is that the ancient recirculating ball type steering wheel has tons of freeplay and no feel whatsoever. You could move an inch left or right and the car still goes straight without any worries. It sometimes makes me wonder on how Mercedes can keep on using this steering setup until the W202 C-class was launched. I suppose it was how Mercedes wanted to cocoon the driver from road imperfections so that no irritating vibration would have a detrimental effect on him on long journeys. Actually this may be a good point as I have mentioned that even in this old Mercedes you would not get tired driving it for more than a few hours straight.

Then it somehow makes you adjust to its driving style. It somehow cools you down and makes you take your time driving it. You want to waft along at 90km/h instead of trying to tear down the road at 160km/h. You also want to plan your corners ahead and take it in stride smoothly. But all for the sake of science I basically floored it once we arrived at the Jalan Semantan interchange into Jalan Duta. For those familiar to this stretch of road you will notice that it is a downhill left hander that is like an inward corkscrew.

I line up the car on the outside lane around 90km/h, tap on the brakes a little, manually downshift the 4 speed automatic into 3rd, and then you aim for the apex by entering into the inner lane of this 2 lane interchange....or try hard in aiming for the apex as the understeer was horrendous. This rear wheel drive Mercedes actually refuses to corner as soon as you start hustling it. By the time I reached the apex of the corner or mid corner I was wrestling with the steering wheel. Who said that Mercedes steering wheels don't have feel? I felt the wheel getting heavier and heavier till I have to sit up a bit more and use some upper body strength here. And I was already in a straight up driving position.

After making the behemoth aimed properly I added more throttle and then aimed the car back towards the outside lane again before straightening the whole car out while merging into the light Saturday traffic on Jalan Duta. By then my friend, who was in the front passenger seat and his cousin right behind me and I were in hysterics, laughing silly at what had just happened. We had just coerced a barge-like car into doing what it isn't normally supposed to do. I was also thinking that if I had a little more power, like if I drove the 2.6 liter 260E version things would be better as I would have power to pull the car through the corner. But in a 200E with about 129bhp and 1450kgs, it becomes slightly harder, even though this car rode on wider tires. The stock car came with 195/65/15 tires all round and it would have understeered even earlier than this car.

Blame the horrid, terrible and ridiculous understeer on Mercedes tuning their cars into having something called "Progressive Understeer" or whatever supposedly technical term you want to call very early understeer. Progressive Understeer is basically a simple cornering principle. The more you want to turn the more you have to turn the steering wheel and the engineers at Mercedes basically tuned in the understeer to make things easy for the drivers – more understeer equals to more steering inputs and slower cornering speeds. It actually is a 'play safe' type of handling and a point that Mercedes seems to make as it wants everyone in the car to be cossetted and feel comfortable instead of making the car handle yet make its passengers puke at all the lurching and heaving as the car takes a corner. Those were the days when Mercedes were still conservative and basically concentrated on important stuff like quality, quality and quality. Nothing wrong with that actually as if you actually drive the car like its meant to be driven it is a dream. 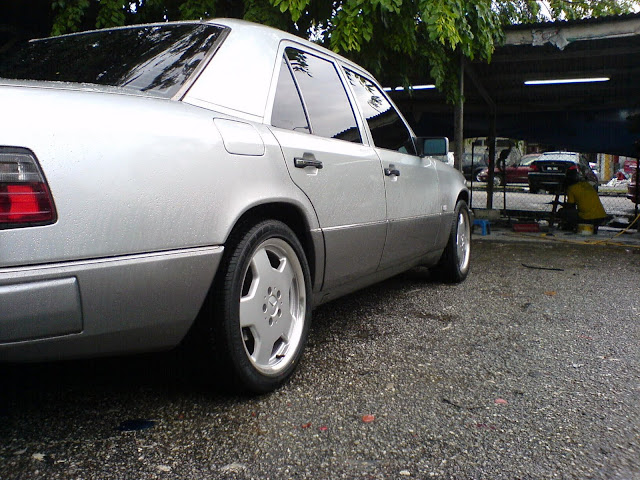 The ride is fine and it will handle high speed cruising with aplomb. At Malaysian highway cruising speeds of slightly above 110km/h is feels planted and stable. It also feels tactile wherever you put your hands on. The steering wheel, the signal and wiper controls, the gearknob and the pedals (brakes pretty decent with almost no real feel except they work fine) all feel mechanical and solid. Nothing like a digital and electronic Playstation as everything seems to be bolted together and is mechanical is feel . It is a record player playing records in this Ipod age and it feels fabulous.

On a few other stretches of road of fast road driving I drove it like how a W124 is supposed to drive. You have to plan ahead for the corners in the 200E and then take it. When you get into a rhythm it feels rewarding. It is not like a tricky sports car or like those golfers who think they've gone to heaven when they got their swing right after 200 tries. It is something that you can master and once you do, it becomes second nature to you. Like learning to ride a bicycle. This is what driving the W124 is like. 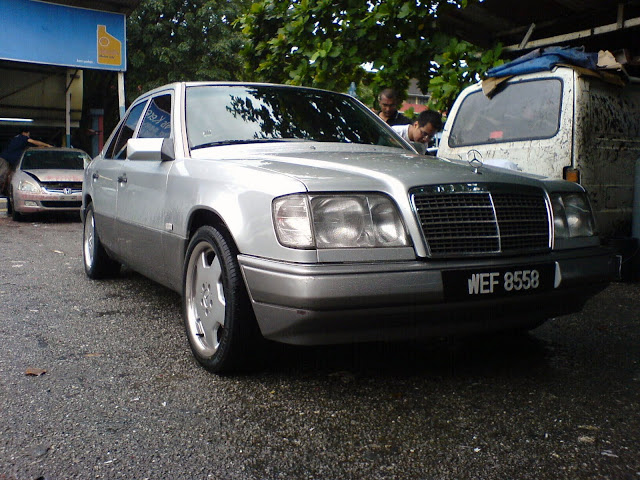 It can because somehow it is as solid as a tank, it rides better (only slightly better), it is quieter and it feels good overall. It may not handle as well as the Persona which has a more neutral cornering stance but it is uniquely different (or uniquely weird) to drive this car fast. The fact that this 20 year old car can feel this good is an amazing thing. You add reliability to the picture and then when you add that three pointed star on the bonnet you know you're driving an institution as well as something intangible called 'a sense of occasion'. This feeling can be best described as the automotive equalvilent of feeling euphoric or happy like its Hari Raya, Christmas or Chinese New Year day. And somehow everything gels. And that is why this twenty year old car is the better car to drive, that extra called character.

Of course, if you want to get one, buy the 260E or the 300E versions. These have the power to pull you out of a corner better than this 200E. But if you got one for RM10,000 like my friend did, it totally does not matter which version you get as its a steal.

Thanks For Nice Posts this truly nice Post and i hope more good information this site soon, i love my W108 and Today is very important for us to maintenance our cars but i am happy for mbzparts workshop who solve my all problems.........

Inside 1980s, Mercedes-Benz constructed the actual the planet's initial driverless autos when using the S-Class, alongside the crew regarding Teacher Ernst Dickmanns on Bundeswehr Universität München. The particular culmination of this energy was achieved throughout 1995, when Dickmanns' re-engineered autonomous S-Class robotic done a trip by Munich, Bavaria for you to Copenhagen, Denmark and also rear. About the autobahn, the actual robotic S-Class achieved rates beyond 175 km/h. It encouraged and also carried out running over moves. The particular car's capabilities left a large impression about numerous observers, and is also told possess seriously swayed robotic vehicle exploration and also finance choices globally.
An idea upcoming crossbreed, the actual F700 exploration vehicle, was likewise presented in the 2007 Frankfurt Generator Show. The particular F700 included three typical opening entrance doors and also a last doorway capable of 180-degree rotation. Also is included with bulletproof and also puncture-resistant tyres.

The W124 is considered to be the most advance car ever built back in the day. It was superior engineering and reliability. I rather have a W124 than any new local car !