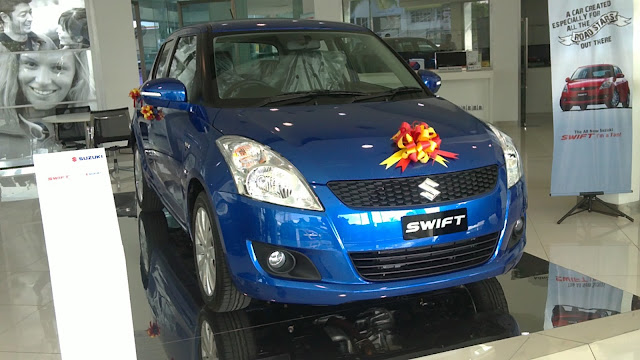 Here we have a few photographs of the All New Suzuki Swift 1.4. A car that is new to Malaysia and old to most places around the world. I have no idea why it has taken Suzuki Malaysia eons to launch the car over here in Bolehland. It may be due to the fact that CKD stocks of the previous generation Swift were not exhausted. It may be some unseen force of economics that may have come into play. It may be something as simple as Suzuki Japan forgetting that Malaysia exists. But lets move on from the conspiracy theories and enjoy the fact that this well-engineered supermini has finally made it to our shores.

At first glance it looks exactly like the older car. Then you notice it is only slightly larger. It's bum is definitely bigger and has a Peugeot 308esque type of look to it. It does look a little more grown up and a little bit more contemporary without losing its original design cues. The interior is better than before. It looks to be better built and it also seems to have better material quaility too. It looks more mature on the inside too. 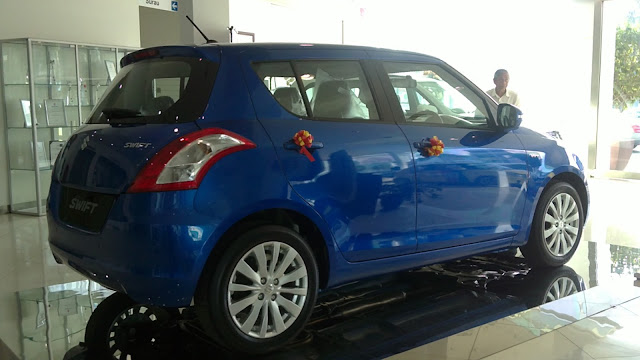 The Swift 1.4 that we are now getting is fully brought in from Thailand. No, it is not imported from Japan and this first batch of cars was brought in to get the ball rolling. From a taxation point of view the car is slightly cheaper than if it were brought in from Japan. This is why it costs RM78K instead of RM82K+ when they first brought in the previous generation model from Japan - but that was a 1.5liter and not knowing what type of arcane pricing system that MITI sets out for imported cars, we may never know if it is cheaper or not in the first place.  According to sources, Suzuki Malaysia will be bringing in about 900 to 1,000 or so units before local assembly begins. 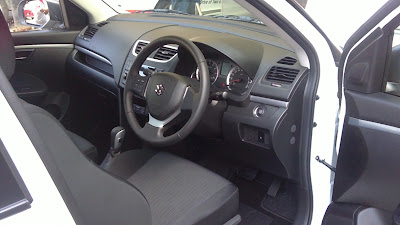 So what has impressed yours truly about this finally available new Suzuki Swift? Aside from the fact that it is slightly more grown up in all aspects, it now comes with something called rear disc brakes. The previous 1.5liter Swift made do with rear drum brakes. So you are getting better equipment with this new, albeit smaller engined Swift - It also has a proper stop-start button for its keyless go system, no need to turn the fob where the key was supposed to go like before. 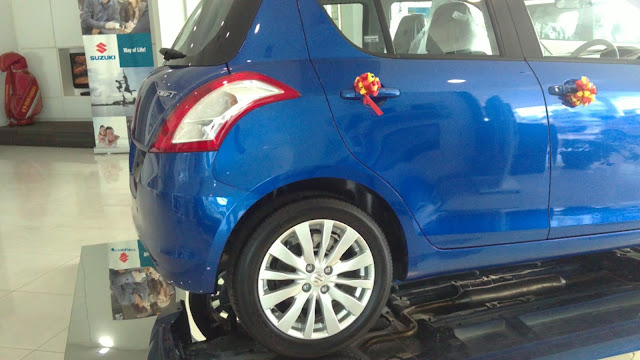 Now the older car made about 100bhp. This new one makes 95. The old one has more torque too but this new one has slightly less mass to move around with. It weighs a good 30kgs less and in theory only loses out  ever so slightly. I suppose this is the price to pay for more refinement and better fuel economy. Don't complain too much as the Swift 1.4  isn't meant to burn rubber (but it has some tuning potential and the potential to look like a Swift Sport - which is good enough for some). Suzuki does not have any other larger engine for the base Swift as this is the largest engine sold worldwide. So if you want more poke in a Swift, wait for the upcoming Swift Sport. Which according to sources will arrive here eventually. 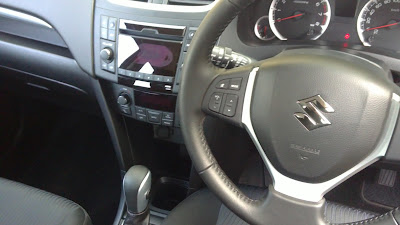 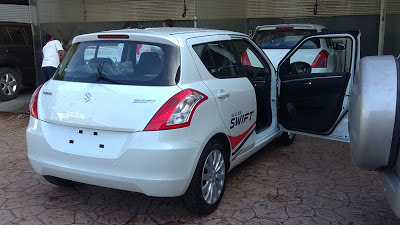 Posted by Rigval Reza at Friday, January 11, 2013 No comments: Links to this post 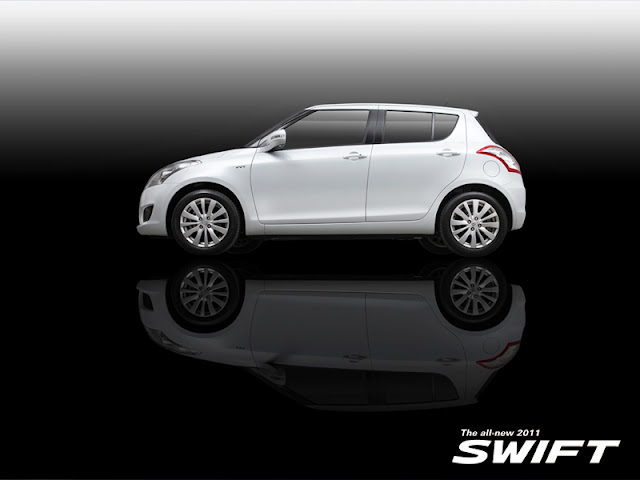 I have been observing my blog stats earlier today and it seems that there are a lot of people trying to find news on the upcoming 2013 Suzuki Swift launch in Malaysia. Most have been directed to my earlier article on the matter where I stated that the all-new Suzuki Swift will be launched in January or February of this year. And you know what? It is true.

By Saturday, 12th of January 2013 the new CBU or fully imported Suzuki Swift 1.4liter will be in most Suzuki showrooms around Malaysia. Prices should begin at around RM77,000+ and for that you get a 1.4liter 94bhp//130Nm/ 147g/km CO2 rating car that is slightly larger than the earlier model. It is lighter too by around 30kg, which is always a good thing. Now if you cannot afford the car at that price, all you have to do is be a little patient and wait for the CKD (locally assembled) model to be launched. It may take a few months, or years, knowing the incredibly long time that we have to wait for this CBU model to come in but yo may save a good RM10,000, which is still quite a lot of money these days.

And how do I know this little detail? No, not because I write automotive related stuff. I bought a Suzuki Alto last year remember? The sales people still remember you if you spend money.
Posted by Rigval Reza at Tuesday, January 08, 2013 1 comment: Links to this post 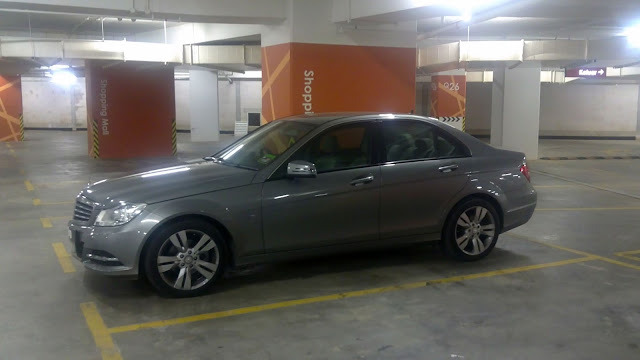 I bought a brand new car right at the very end of 2012. I suppose to some it does not make sense to buy a car right at the end of the year but in my case, the car was being sold on a discount to clear 2012 stocks and therefore the discount alone covers whatever depreciation that most of you people think about. I certainly do not.

I bought a 2012 Mercedes Benz C-class.  A C180 CGI with a 1,796cc engine, 156bhp and 250Nm torque running through a 7-speed automatic gearbox. Me, a motorhead who writes for several automotive websites ends up buying a Mercedes. What does that tell you folks out there? It tells you people that Mercedes Benz makes splendid cars. I suppose the same thought is shared with notable journalists out there like Jeremy Clarkson (who owns a CLK63 Black and a classic 600) or Chris Harris who at one time or the other reviews a whole lot of Mercedes Benz AMGs and loves them to bits for his video reviews on Chris Harris On Cars/ Drive.

Of course, since I live in Malaysia and the prices for more exotic Mercedes Benzes are stratospheric, I had to settle for an entry level one that is still costing me a smidgen over Two Hundred and Fourteen Thousand Ringgits. This would be the same if I lived in Singapore, as COE would make the same C180 CGI cost over Two Hundred Thousand Singapore Dollars. Tough luck. If this were the UK, the same car may cost about Twenty Five Thousand Pounds. I'll just have to make do with this then as beggars can't be choosers.

Oh yes, this is one surprising Mercedes Benz. The car is brisk to drive, the handling is precise and overall the refinement impeccable. Build quality is typically Mercedes Benz and it looks like they're (almost) back to the days where their cars felt like they were made from a solid block of steel. Everything you touch is nicely weighted and balanced. This little bit of extra tactility is what separates a proper premium executive sedan from the rest. A Toyota Camry may offer you the same amount of goodies, but the weighting and feel is still all wrong. An Audi gives you more flash with the same quality feel but an Audi feels a little lighter to the touch (which some like). The interior of the new BMW F30 3 series comes close but is still no cigar in my opinion.

The BMW F30 may now have overtaken the C-class in the handling stakes (the previous E90 wasn't as good as this W204 in my opinion), but this C-class still feels like its steering is sharp and nicely weighted, and goes where it is pointed. It also corners quite flatly too in my opinion.

But what actually moved me to buy this car (other than the fact that it was being sold on a discount) was the badge. That three pointed star is an institution. Especially with the traditional grille and the upright hood ornament. Targeting the road you're on as you drive. The way it sits on the bonnet makes one feel good, which is why Rolls Royces and Bentleys have one too. Much like the bonnet scoop on a Subaru Impreza. Yes it's a completely  different thing, but I suppose I do like something slightly blocking my forward view in a car and that three pointed star does it for me.

Posted by Rigval Reza at Tuesday, January 08, 2013 No comments: Links to this post