The 3 Grouses For The Beautiful Month of February

The other day I was reading the latest issue of HYPERTUNE and the reader’s help section caught my eye. A guy who owned a Toyota Unser was asking for help from a performance tuning magazine concerning his Unser. Why? These van owners must get it through their heads that they are driving a van that is trying to be a ‘lifestyle’ vehicle that can do everything. A swiss army knife kinda thingy. However, a large 7 seater object isn’t a small and dainty pocket knife. A Toyota Unser is as dainty as a hippo wearing a tutu and trying to dance the Nutcracker suite. It’s as pointless as asking the current government to start and finish projects on time. It’s as pointless in asking a nun to lift up and show you her knickers. It’s as pointless as trying to ask Proton to stop producing the Saga. What the owner should do is stop wasting his money on performance CAR magazines and publish a magazine for Van owners like him. Maybe I should capitalize on this in the first place. I’d call my magazine – Lifestyle MPV – with the motto – For the discerning MPV owners with Taste. I’d be rich. But as I do not like these vehicles at all, I shall not bother. But others who have read, feel free to capitalize on this idea. These people are like eager beavers. The second option for guys like the Unser owner is stop buying HYPERTUNE and save up and buy an Estima, which at least looks sleek.

Now the second grouse for the month are on car clubs. The problem with people who own cars these days is that they like joining car clubs or inventing car clubs specific to their vehicle. It is getting ridiculous as every other day there is a new model being launched and if every one of these vehicles have their own club, there’ll be a million by 2010. For example, if you buy a Proton Satria Neo, you decide to start a new club called the Satria Neo Club. Then lots of others who want to exchange ideas join the club. Soon, there’ll be about 500 members with the same car joining the club. Things will be fine and dandy for the next 5 years, where new members join and old members sell off their cars and leave. But then, a newer Satria comes out, and therefore makes the old one out of date. What happens? Another bloke decides to start a new car club called the Satria MK3 club or whatever the latest Satria might be called. In the end, there will be 200 clubs for Satrias alone, the Satria GTI club, Satria Special Edition Club, Satria original club, Satria Pencen Club, Satria 1.6 owner’s club, Stupid Satria Owners Club, Dumbass Satria Owner’s Club, Balding Specky Pot Bellied 30 something Satria Owner’s Club and so forth. What needs to be done by these enthusiasts is make one club like the Proton Satria club, then have divisions in the club, like the Satria Gti Register, Satria 1.3 register and so forth. It’s as systematic, and logical as you won’t see membership turnover slowing down just because the car has been out of production for 10 years. Members will help other members of the same brand and because there are so many interchangeable parts, there can be inter-registry meets and these clubs will flourish. Of course its easier said than done, as every one of these car owners think that their car is great and deserves a group of their own. But then again, how unique can your car be if you see 100 others of the same type gathered in one spot? Imagine 100 Satria GTIs in one place at the same time? What’s unique about that? I believe a club with diversity will last a long time rather than a one make club.

The third grouse for the month is Proton, Hyundai and Kia owners who think that their respective Waja (see pic and check out the front grill), Wira, Accent and Spectra are Imprezas. What is wrong with you people? Why aren’t you proud of the type of car you drive? (Although I wouldn’t be 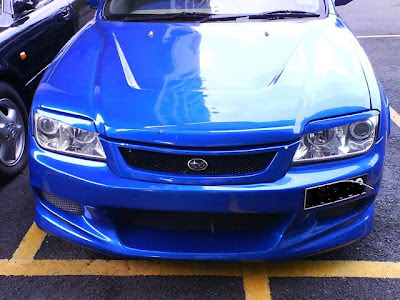 proud driving a Accent RXS in the first place) Why do you think your car has a semblance of an Impreza when its either too boxy or too small or what not? Have you been getting high on ganja? Did you have too much Jack Daniel or Budweiser on that day? If you own a Proton Wira, it is excusable if you want to mimic a Lancer EvoIII. But a Subaru? Waja owners, kindly refer to my earlier article on this stuff sometime end of last year. Accent owners, why did you even buy this small crappy looking car in the first place? Why stick on the Subaru sticker? How do any of these people who drive these cars feel when the real deal passes by or stops right beside them? Does it make them proud?

If you have any friends who are one of these car owners mentioned above or think that they should modify their Van or join a ‘special’ car club, please advise them to stop what they are doing. Either that or take some C4 and shove it into their nether regions and do an Altantuya. It’ll make me a very happy chap indeed. Now if you’ll excuse me its time for a cuppa tea.

Posted by Rigval Reza at Friday, February 16, 2007 No comments: Links to this post