Recently I had the opportunity to try various new and old cars. A lot of them were the normal Front Wheel Drive Cars, to some ones but none of them were rear drive ones. This goes to show that we have got a big hole when it comes to rear wheel drive vehicles. You read in the magazines, you watch on TV that truly sporting cars have their rear wheels driven and their front wheels for steering. Purity of steering and drive I suppose but the general population isn’t going to experience such a feel as none of the bread and butter cars have rear wheel drive or for that matter all wheel drive. I think as a person who enjoys driving I can consider myself pretty lucky as I have the opportunity to try cars other than the norm and that I am not a motoring journalist per se.

Those who have been reading my ramblings so far will note that I am in my opinion one of those who does not like a lot of cars, including the VW GTI and the Suzy Swift Sport. Why you may ask? Well, the GTI is too big for its own good compared to the 1st and 2nd gen GTI and that is all the reason you need. It may be fast and all but it’s a van in hot hatch clothing. Why buy a van if you don’t need to? The Suzy Sport has a rubbery electrically powered steering which I don’t like and those motor journalists are all wrong. It 100% does not feel like a hot hatch of the ol’ skool. It has a driving position akin to a mini MPV i.e. tall and no low slung like those ol’ skool Honda civics from the late 80s and early 90s. I mean, what memories did it bring those journalists? Did they spend their teens driving around in 1st generation Renault Espaces and Toyota Estimas? There is nothing ol’ skool about the Swift Sport in my opinion. It is a current variation of the hot hatch theme so prevalent 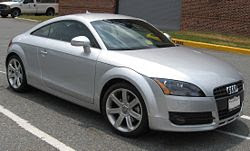 nowadays; i.e mini MPV looks (Golf GTI again) and mini MPV seating position. I am sorry, but I drove around in a 1981 Honda Civic when I was 18 and it didn’t feel like a VW Combi Bus.

Now back to driving front wheel drive cars that actually make me feel good. I drove the new Audi TT2.0 recently and it is a very well put together car. I’d buy a car just by looking at the dash and feeling the tactile feel of the switch gear and steering. It’s an Audi, therefore very well put together. The DSG gearbox is a marvel of technology and was so much smarter than I was when it came to changing gears to match the corners and engine speed on my first attempt. It’s like you waking up in the morning and the maid and butler has everything prepared for you in advance. It’ s that good. The engine is typical VW-Audi Group FSI in that is sounds like a diesel on idle. It pulls good with very little lag from the turbo and coupled with that gearbox’s sweet gearing and the chassis’ low weight make the car one of the nicer front wheel drive cars that I have driven. If you have RM368,000 to blow on a car that has 200bhp, Porsche like looks this is the car to get. If you have RM200,000 to blow on a car and want the DSG gearbox, there is a van called the VW GTI. So don’t. Buy the stripped out Civic Type R instead. There is purity of design in that car which the golf does not have. Unless you’re already feeling old at the age of 30 and would still like the van which would mean your next car could be a boring MPV.

One other thing good about buying a 200bhp front wheel drive car is that it is safe to most Malaysian drivers. I mean, imagine this, if you were a guy who is around 30, it could safely mean that your first few cars were 1990s Protons and Hondas. These are front wheel drive cars and the only problem about them is that they will understeer. Which means you will see the roundabout you are crashing into and if you are slow enough, a little lift off will pull you back into line. Most Malaysian drivers are instinctively like that nowadays. They wouldn’t know what to do if suddenly the tail stepped out and it is the tail which happens to be oversteering into the roundabout. So graduating to a 200bhp front wheel driver is actually good sense as it won’t get you killed. But the question you might ask is that is it fun? Yes it is. The TT is a fun car, up to a limit. However this limit is pretty high for most normal people. I mean put a normal Honda Civic driver with only 5 years of front wheel drive experience into a BMW 330i in the wet and see if he can do the same rubbish he did in the Civic and survive. In fact, he may survive and be happy in the TT, which is actually good in terms of road safety. So, buy the TT for a wonderfully built car and a car that’s pretty fun to drive most of the time if you’re looking for a 2 door sports coupe. If you’re looking for all out thrills at RM200,000.00 buy the Civic Type R. 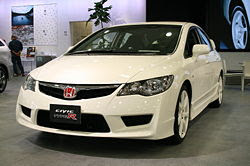 Civic Type R (right) is something I haven’t tested yet, but urban legends on the car have popped up and according to all of them that I’ve heard the car is nothing short of amazing. At RM200,000, nothing comes close if you’re looking for an out and out front drive rocket that handles.

front wheel drive cars out there? No. You can buy some pretty decent handling Protons with wonky build quality and cheap plastics that you’d be satisfied with if you can tolerate it. The so called good cars start at RM100,000. You can buy the Swift Sport for RM100,000.00 for lift off oversteer and trailbrake oversteer but you’d have a seating position of an MPV and a rubbery steering. What you could buy if you didn’t care about resale value is a brand spanking new Alfa 147 2.0 selespeed (see pic above) from the local distributor at a very cheap RM110,000 pre registered. While the Alfa 147 is a little long in the tooth, it is a fun car to drive. I recently drove a manual 1.6litre version and was quite impressed by the engine in terms of power, throttle response and of course by the sound produced by it. It is typical Alfa in that it sounds soulful. I think one of the best sounding in-line fours ever built. This is something you should go for; a sense of occasion which most cars don’t give you. The interior is nice to look at and the only problems I give that car was that its gearshift feels like a Datsun 120y, loose and vague. But being humans, we can adapt to such things over time and furthermore, if you’re buying new, there is no other option but the semi automatic selespeed.. The ride is pretty good, a little floaty but is entertaining nonetheless. The main thing is an Alfa 147 means you’ve got taste and willing to take risks in life. Risks in life? Well yeah, as you firstly don’t care about resale value (which is a good thing since no car actually holds value nowadays) and secondly you don’t mind the pain and suffering of maintaining an Alfa. I suppose with new Alfas the only thing is the selespeed gearbox and suspect electrics here in the tropics. It may or may not last, but there’s warranty which you could claim like crazy from the distributors and there’s the option of driving a Mazda 3 1.6 at RM99,000. And no, Mazda hasn’t paid me off in any way. It’s just that if you want reliability and decent looks as well as the car being not as common as the rest of the cars around this price range there is nothing other than this car if you want a decent sporting front wheel driver. The Lancer GT has risen in price and is going to be a pretty common car going by demand. The Lancer GLS actually is pretty sad loo

king. So buy an Alfa. Take some risks in life.

I've not mentioned those cars that you can get on the grey import market, but the Toyota Celica (left) get s deserved mention. For around RM120,000 it is entertaining with good steering feel, Toyota quality build standards and very decent power from the 1.8 VVTLi engine (180-190ps).

Does this article tell you that I don’t like to Golf GTI? Yes.