20 Years of Motoring. In those days there were no MPVs in Malaysia.

I just realised one thing. I got my driving licence at the age of 18 and I have been driving for 20 years. This basically shows that I am almost an old fart. Motoring throughout the years have been fun. And surprisingly, it is after nearly 2 decades of driving and motoring that I started blogging about most of the experiences. Well, those days the internet was a real 28.8kbps slow moving piece of information technology compared to the Gigabytes that we get these days from broadband. Nowadays everyone can access information and buy stuff off the internet. Something we didn't have those days.

In those days there wasn't much info on-line about modifying your car or about anything much actually. Computers were basically the same size but speeds were tortoise levels. I remember starting off on the internet in 1990 on Bulletin Boards. These was the forums of that era and information was limited to those with slightly more than basic PC knowledge. The PC I had was a 486SX-33mhz and 4mb RAM. Now, I'm on a notebook with about 2.6Ghz with 1Gb of RAM. I think. Streaming video was a thing that was never thought about. Streaming audio was already fabulous at the time. And back to cars, everything we had to find out about our next purchase or next mod were from magazines. It was a month to month thing waiting for the next issue of Performance Car or Fast Car to come out. Usually shipped a month late from the UK to Malaysia. Boy, we were backwards then.

Cars in 1990 were still light and nippy, and expensive aside from Proton. A 1.5 Saga Automatic cost around RM33,000.00 and the Honda Civic EF was the car to own, at around RM10,000-15,000 higher. I was driving around in a 1981 Honda Civic and, having any car was good enough. A car meant freedom, and I cherished it. When I didn't have the car around me, due to various reasons (it was actually my mum's car which I took over) like dad needed to use it as his car was in the workshop, things was slightly dull and depressing. You could impress the gals with any car those days.

These days, things are faster and so much more refined. People are so much more demanding and a 20 year old banger wouldnt get you through 1st base most of the time. Unless you pour alot of money into the ride of course as even a basic entry level car can handle decently and post a faster laps that 200bhp cars from 20 years ago. Technology has made things so much better. Maybe the only thing missing is soul. Everything is digital and there's not much place for analog. Even in cars. For example, cars have electric motors ruining steering feel for the 1% fuel economy. Cars have electronic everything that someone limits the car and driver interface. Everything goes through a single button to scroll aircondition, radio, cd, mp3, lights and so forth. Those days 1 switch operated 1 item. Not anymore.

But one good thing last time was that no one even heard of the concept of using MPVs. People could survive with just a 4 door sedan and travel places with it. I think we are spoilt for choice nowadays. And its making us make all the wrong choice. Those were the days. And aside from no MPVs on Malaysian roads, I think things are better nowadays.
Posted by Rigval Reza at Sunday, January 31, 2010 No comments: Links to this post

Email ThisBlogThis!Share to TwitterShare to FacebookShare to Pinterest
Labels: 20 years ago, stuff, the ol' days

The most pathetic mini MPV in the world

Note the marketing blurb below and check out the picture of the CM8.

"Two Chana Era models – CV6 and CM8 – made their debut in the Malaysian market yesterday. The vehicles, distributed by Changan Berjaya Auto Sdn Bhd, have a combination of Italian designs, Japanese technology and German engineering and come with an affordable price tag."

It doesn't look so bad from the side view doesn't it?But what I can tell you is that this is what the marketing team wants you to think. Italian design; think Ferrari, Maserati, Alfa Romeo. German Engineering; think Porsche, Mercedes, Audi. Japanese Technology, Honda, Toyota. Wow! This must be one fantastic mini MPV. So much so you wonder why you haven't seen anyone driving one of these 'fabulous' minivans around KL since its official launch sometime in January 2009. The reason is the shape of the really ugly awkward overall shape of the vehicle. It's purely horrible.

Even this picture of it is flattering. The next one is from Motor Trader. The photo wasn't touched up in anyway by yours truly. It really is a tall skinny, unbalanced, unproportionate looking vehicle. Now which Italian design house drew this? Giugiaro? Bertone? Pinninfarina? It must be the  drunk janitor at the design house who scribbled a drawing of a car and somehow convinced the Chinese that he was a car designer. Or that the Italians were conning the Chinese out of their Yuan so that they can have a nice bonus for almost no work done.

I'd rather get the flu than test drive one of these. 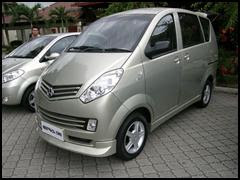 Now the amazing thing that I remember as clear as it was yesterday (which it wasn't) was that I was at a shopping mall and this horrid looking vehicle was being promoted.

I was by now trying extremely hard not to burst out laughing. I pity the sales rep. I hope he's now selling Peroduas as no person in his right mind would buy a Chana.

Posted by Rigval Reza at Saturday, January 09, 2010 4 comments: Links to this post

Email ThisBlogThis!Share to TwitterShare to FacebookShare to Pinterest
Labels: oh my god, what not to buy, why

I recently met two old friends at a house of one of them. This house belonged to the chap who owned the Nissan 350z and the Mercedes W115 I tested recently. The other chap who came works as a journalist and now writes for a Naza in-house magazine for their Mercedes Autohaus customers. If you are aware, Naza has a Mercedes dealership in Klang which is doing quite well. I suppose selling genuine new Mercedes to Klang’s millionaires is a very profitable thing to do if you can afford to have a magazine published for your customers. The sad thing is, he’s not allowed to simply test drive any of the grey import cars that Naza brings in. Tough luck.

Aside from that, it was a very automotive related few hours where we basically talked about cars. Topics like how incredible the LED lights of the newly facelifted Audi A6 looked at dusk to what car would any of us buy if we had RM500,000.00 to blow. The journalist chose a Nissan GTR. The chap who already owned a Nissan wants to buy a Porsche Cayman. I wanted what I always wanted. A grey import SL55 (only for the sound the V8 makes), which I believe could be bought at this price now. If it still can’t be bought at this price, I’d settle for a 1st generation CLK55 or a stock 996 Porsche 911, which I surely know could be procured at that price.

The argument on why I chose those cars over the GTR even though we’ve all heard fabulous things about it is simple. I was born slightly before the Playstation age in that my wall poster heroes were the Lamborghinis, Ferraris and Porsche.  The Playstation generation would go for the GTR, but my dream cars were never Nissans. So there, a GTR would be bought after my Ferrari, my Porsche, my Alfa, my other Ferrari, my other Porsche etc.etc. . In other words, I may drive it one of these days, but I’d never own it.

I've made some posts on myautoblog.org under the pseudonym Rigval. If you readers have the time, stop by over there for some laughs.

(edited as I'm now posting under my name!)
Posted by Rigval Reza at Saturday, January 09, 2010 No comments: Links to this post

Email ThisBlogThis!Share to TwitterShare to FacebookShare to Pinterest
Labels: myautoblog 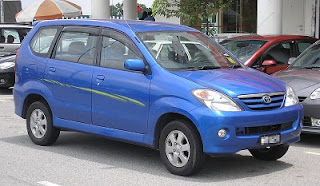 The Toyota Avanza. Where do I begin. Maybe I shouldn't as its totally rubbish. Only people who do not like cars buy this supposedly mini MPV. It looks like it was styled by a 1 ton truck designer and it shows. It is not very nice to look at due to the design specs for interior space and for the lower end of the market. But the main point is, supposed motoring enthusiasts should not buy this Van. If you enjoy the thrill of driving, what in the world made you buy an ugly looking van in the first place?

The worst reason that you'd give is that "I bought it 'cause its a Toyota". I'd rather take the bus.

The most irritating fact about Avanza owners is that they must have bought the van without really test driving it or realizing that it is crap. Its a Toyota means that its something good."Good" isn't the correct word here. It is rubbish, but it is a form of transport. That is the only reason to buy anr Avanza.

Another strange fact about Avanza owners is that I always read in a Sunday motoring pullout of a local daily that posts SMS questions for the editor or the tech advisor for the paper to answer. Questions like the following are usually posted for people to laugh at the bad decision the Avanza buyers make.

1. My Avanza is uncomfortable to drive. It rides too hard. Is there any way to soften its ride?

Let me answer this question for them. You bought the wrong car you fool. Can't you tell that it is a van in the first place? It was designed with a budget in mind and for people with limited budgets. What do you expect? Multi-link suspensions in the rear? Air suspension? Self Leveling? The ride of a Lexus? For Godssake its a car designed for the Indonesian mass market. That should tell you how competent the ride is. Stop posting SMSs like these on that newspaper okay? It's as pointless as flapping your hands and trying to fly.
..
2. I want to improve the performance of the Avanza. What can I do to make it better? Its a mini MPV. Do not bother, you should be following the same speed limits are busses on PLUS highways. If you wanted to act least think like you're driving a Subaru Impreza then you should do like what some Proton Saga owners, add Subaru Wrx Sti scoops to their ride. Maybe you should sell your supposedly 'better status than a Proton' Toyota for a Proton. At least they now make a proper proportionate looking MPV for the same price.

3. I want to put a DVD player in my Avanza. Will it affect the power of my Avanza?

This was the stupidest question I've ever read about Avanzas anywhere. I suppose anyone adding a small DVD player stereo head unit would make any vehicle lose 200bhp. If that were so, no one would be selling or buying aftermarket sound systems for their automobiles. Where did people like these crawl out from? I really pity the people editing that daily sometimes.

In conclusion, I may sound like a person who does not respect other peoples choices. But making wrong choices sometimes allow people like me to seem mean. It's their idiocity that needs helping. Do not buy Avanzas. You may be as clever as the people who posted the examples above.
Posted by Rigval Reza at Saturday, January 02, 2010 No comments: Links to this post