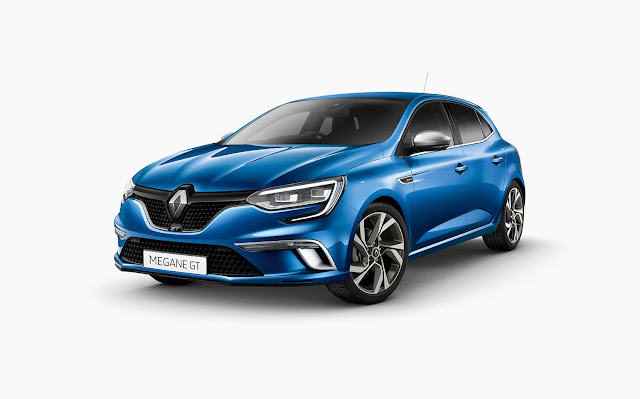 The upcoming Malaysia Autoshow 2017 scheduled for the 9th to the 12th of November. Malaysia's premier autoshow will be where TC Euro Cars, official franchise holder of Renault in Malaysia, reveal the new Renault Megane GT. The Megane is Renault's C segment hatchback and it was first launched at the end of 2015 with sales first starting in Europe in July of 2016. It has taken Renault awhile to bring it over but we will finally get to see this interesting looking hatchback.

From the information provided by TC Euro Cars, the Megane GT is a high performance version of the Megane with 1.6 litre 4 cylinder turbo diesel and turbo petrol powertrains (we should only be getting the petrol variant). The GT spec cars come well equipped.

It incorporates a four-wheel steering system (4Control) and dual-clutch automatic gearbox with optional paddle shifting. There is also that nice interior dominated by a large touchscreen infotainment unit which makes the interior look clean and uncluttered.

It also has a slightly different design for the interior and the exterior compared to the more basic Megane variants and it actually sits just beneath the Megane R.S (which was only recently revealed over in Europe a month or so ago).

The photos you see here are the Australian spec Megane GT which should be similar in specification and looks to the one that will be on display at the autoshow. Renault will also be displaying the Koleos premium SUV, the Captur urban crossover, the sporty Clio GT Line hatchback and the  value-for-money Fluence.

The Renault exhibit is located at Hall A, MAEPS (Malaysia Agro Exposition Park Serdang). More new unveiling should be made at the motorshow. It looks like its going to be quite fun.

CATCH THE RENAULT MEGANE GT SHOWCASE AT THE MALAYSIA AUTOSHOW 2017
Kuala Lumpur, 7 November 2017 – TC Euro Cars (TCEC), the sole franchise holder of Renault vehicles in Malaysia, will be showcasing the dynamic and striking New Megane GT at the upcoming Malaysia Autoshow 2017, from9-12 November.

Created in collaboration with Renault Sport technologies, the New Renault Megane GT seeks to open up a whole new world of driving thrills and sportiness to as many motorists and car enthusiasts as possible. It represents an intermediate performance road car offering to the all-out high performance credentials of Megane R.S.

Renault Sport technologies’ engineers have fine-tuned the suspension of the New Megane GT to deliver a genuinely spirited ride that is still perfectly suited to everyday motoring. The technologies they have adopted, including the 4CONTROL system (four-wheel steering), have been chosen to ensure a perfect balance of driving enjoyment.

Renault’s family of modern, stylish and dynamic mainstream vehicles will also be on display during the autoshow. The line-up includes the Koleos premium SUV – Renault’s flagship model, the fashionable and versatile Captur urban crossover, the sporty Clio GT Line hatchback and the spacious value-for-money Fluence.
The Renault exhibit is located at Hall A, MAEPS (Malaysia Agro Exposition Park Serdang).

For more information about Renault in Malaysia, please visit www.renault.com.my or www.facebook.com/RenaultMalaysia.