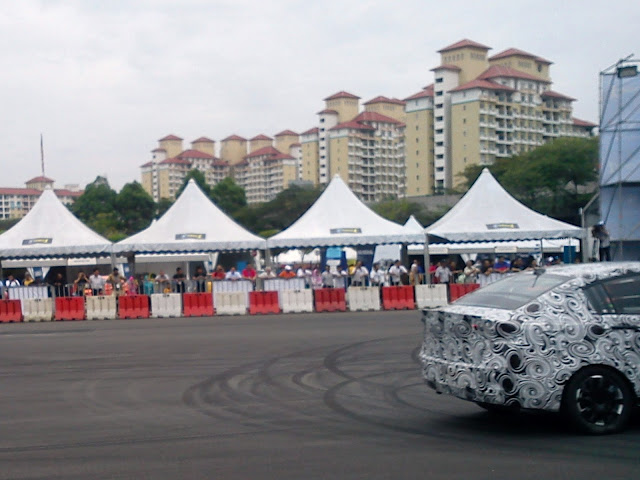 Before I get started I have to say this. The Proton P321A, (shown here leaving the picture because this article isn't about it) is not based on any Mitsubishi, Honda, Volkswagen, Kia or whatever brand you can think of. It is Proton's own design based on an evolution of the Proton Persona/Gen2. I have decided to state this because someone used Google and typed “what car is p3-21a based on?”. This must be one of those individuals who thinks wants it to be a Mitsubishi so that they can put the Mitsubishi badge or one of those Ralliart stickers on the car if and when he or she buys the P321A. I believe this is the only reason why someone would conduct such a search. Trust me. I think I am quite in tune with the Malaysian motoring psyche.
Read more »
Posted by Rigval Reza at Friday, March 16, 2012 No comments: 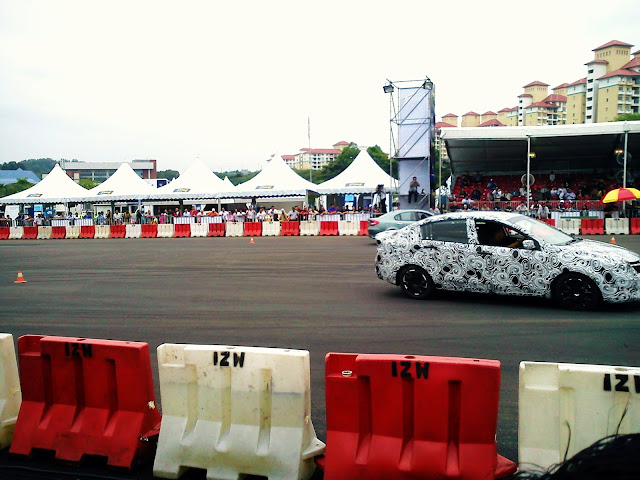 Proton brought out the Proton P321A prototype to its Power of 1 event over at Bukit Jalil yesterday (and for the next few days). The car was in typical test car livery - i.e full of swirly stickers camouflaging the looks of the car. But one can basically tell that it is a 4 door saloon in the same mould of its supposed predecessor the Proton Persona. It looks slightly taller and slightly more contemporary.
Read more »
Posted by Rigval Reza at Thursday, March 15, 2012 No comments: 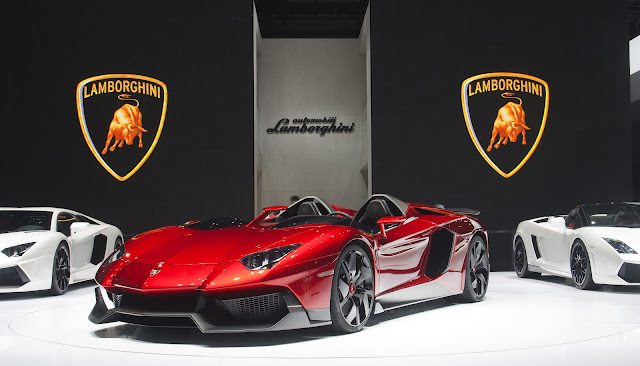 The ultimate toy and new wall poster for 12 year old kids everywhere. This is my opinion of the new Lamborghini Aventador J concept car. It has no roof, no windscreen. If you want to hit 300km/h in this 1,575kg 700hp roofless supercar you will need a helmet or spectacles that will not lift off that those speeds. While road legal,  it cannot be drive to the office (if you don't own the office building), or the market or any place that anyone can basically steal it. It is so single minded in its pursuit of ultimate performance that it is  basically a toy and nothing more. Lots of Arabs and Russian gangsters are going to love it if and when Lamborghini makes it.
Read more »
Posted by Rigval Reza at Wednesday, March 07, 2012 1 comment: 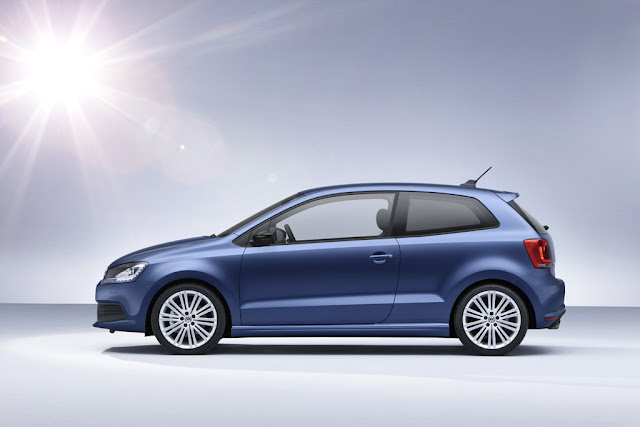 Hello chaps. I am just too lazy to type this out in my own words so let's just let VW say it for me.

"The new Polo BlueGT stands out in its ability to combine superior dynamic performance with extreme fuel-efficiency. The technical highlight of the progressive compact car is the cylinder deactivation system, which is being introduced for the first time in a Volkswagen – also known as active cylinder management or ACT. The system was realised with the new 1.4-litre TSI of the Polo BlueGT. The torque-strong TSI develops a power output of 103 kW / 140 PS, yet has a combined fuel consumption of just 4.7 l/100 km* (equivalent to 108 g/km* CO2). If the Polo BlueGT is ordered with the optional 7-speed dual clutch gearbox (DSG), fuel consumption drops further to 4.5 l/100 km* – and, bear in mind, this is a petrol, not a diesel (105 g/km* CO2). Nonetheless, this car, with a top speed of 210 km/h, accelerates to 100 km/h in just 7.9 seconds. This uncommon coexistence of efficiency and dynamic performance is enabled by the systematic interplay of ACT, downsizing (reduced engine displacement plus direct injection and charging) and BlueMotion Technology (Stop/Start system, battery regeneration). As such, the Polo BlueGT closes the gap between the Polo 1.2 TSI (77 kW / 105 PS) and the Polo GTI (132 kW / 180 PS). The new car will already on the market in July." 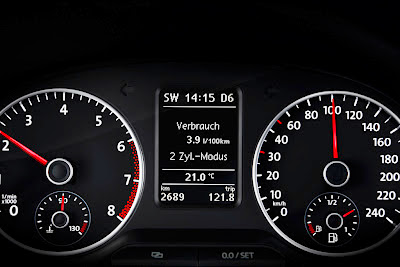 If you took the trouble in reading the above, it basically means that this 'Green' Polo BlueGT has more power than the basic Polo 1.2TSI and less power than the Polo GTI. It however is more economical than the 1.2TSI which only makes a combined 5.3l/100km against the BlueGT's 4.5l/100km.

Imagine if you decide to boost the turbocharged engine with one of those aftermarket tuning options (ABT, REVO, Superchips) when such an option is available the BlueGT may even get you the same horsepower as the Polo GTI. And it should still be pretty economical too. 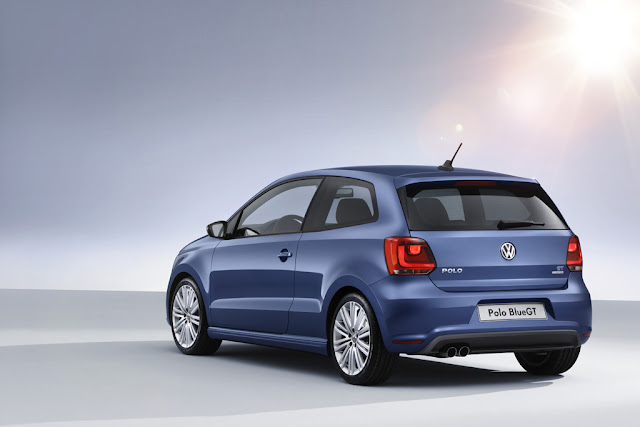 The only problem with the Polo is that ...it is a Polo. That slightly too narrow a chassis would basically mean a  slightly twitchy car and very high speeds. But then again, as if most of you VW Polo 1.2TSI owners out there actually get out of town and hit the B-roads anyways.

Another question would be whether I really care about saving so much fuel in the first place until I would end up buying one over say, a Ford Focus TDCi or a 140bhp Mazda 3 hatchback or that sort. If the VW Polo 1.2TSI costs about RM113K and the Polo GTI costs RM145K, it would mean that the BlueGT may cost RM130K or thereabouts IF VW Malaysia decides to bring it over here. Such a small car for so much money - As is the Polo GTI, which in my opinion would struggle for sales as it VW sells the same engine in the larger, albeit much softer Golf TSI. 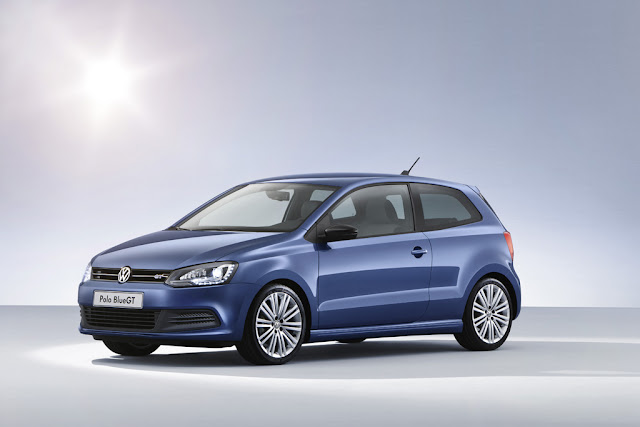 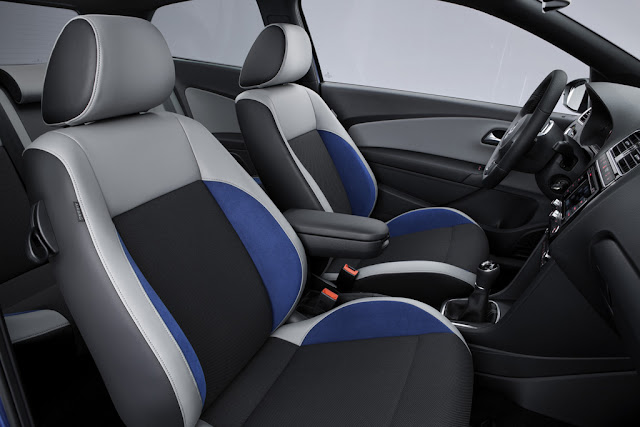 Posted by Rigval Reza at Tuesday, March 06, 2012 No comments: Links to this post 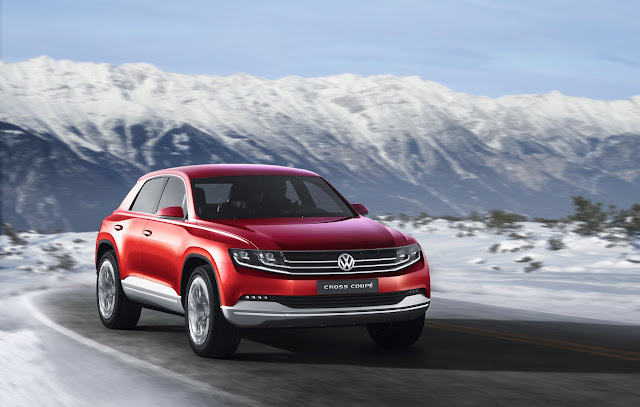 I usually ignore VW Media emails as it comes in very, very, very, very, very frequently. But this is actually good news - a hybrid that weighs nearly two tons yet still makes 156.93mpg (Imperial Gallons) and can hit 220km/h. This is absolutely the case of eating cake and still losing weight. Hmm, better make that ...and not gaining much weight since it weighs 1,858kg which is pretty heavy.


This is what VW says;
"The Cross Coupé Concept is powered by an alliance of a turbodiesel direct-injection engine (TDI) and two electric motors. Its combined fuel consumption in the New European Driving Cycle (NEDC) is a sensationally low of 1.8 l/100 km. This is equivalent to CO2 emissions of just 46 g/km. Noteworthy here is the fact that the Cross Coupé is a powerful SUV with a top speed of 220 km/h, 225 kW / 306 PS of power (system power) and a kerb weight of 1,858 kg. "


But I do wish that VW would use a proper coupe body instead of one of these Crossover SUVs which I dislike. It could even go on and make 180mpg and go even faster. Furthermore that body doesn't look so interesting doesn't it? It looks slab-sided and a little dull if not for the slightly polished front end. Typical VW. Not stunning enough I must say. How about the drivetrain in a Scirocco?
Posted by Rigval Reza at Sunday, March 04, 2012 No comments: Links to this post

Has Peter Schreyer's team at Kia run out of ideas with the new Kia k9? 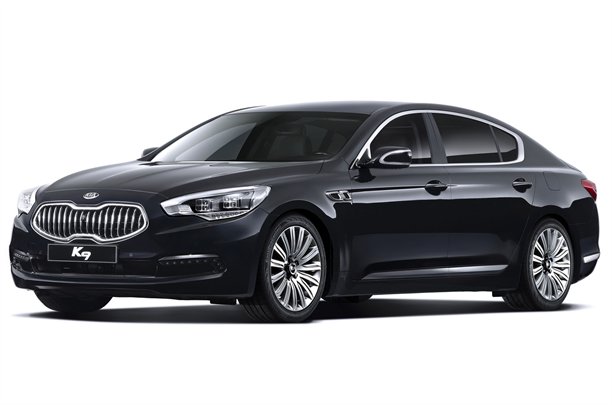 Run out of ideas Kia? In both car design and in naming the car? K9 sounds so much like 'Canine' doesn't it?. It looks a little disappointing because the car looks so much like a BMW. 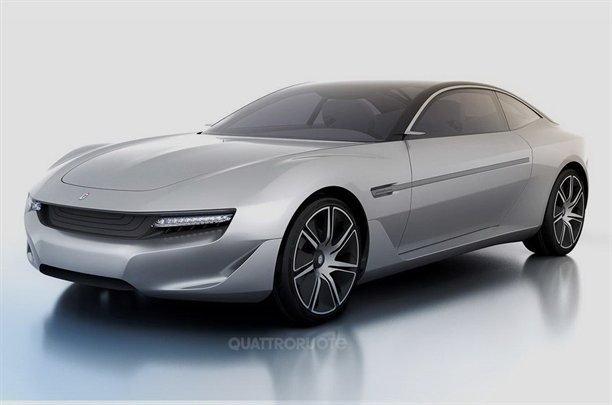 The Pininfarina Cambiano - A idea for a 612  Scaglietti rejected by Ferrari? 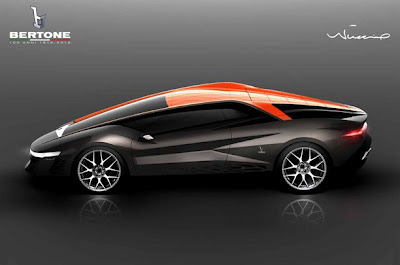 The Bertone Nuccio - Not a very balanced looking car

Both Pininfarina and Bertone are two companies responsible for coming out with the design of classics like the Ferrari 365GTB Daytona and the Lamborghini Miura respectively as well as a plethora of supercars, family cars and unique, one of a kind cars for individual customers. These companies also brighten up car shows with the amazing concept cars. But this time I have to say that both have come up with duds this time around.

Click here to read the rest of the article. Posted over at Myautoblog.org
Posted by Rigval Reza at Sunday, March 04, 2012 No comments: Links to this post