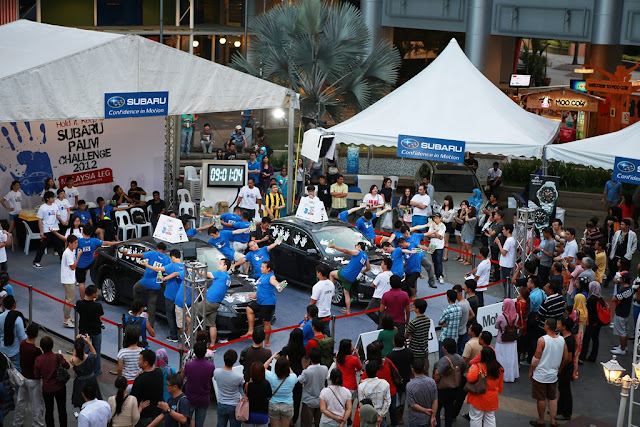 The morning on September 8, 2012 was filled with excitement at the Piazza, The Curve in Petaling Jaya as  62 people (who must have taken leave from work, college or from counting the tiles) with an aim to win a car took part in the highly anticipated Subaru Palm Challenge 2012 – Malaysia leg recently.

Throughout the nine and a half hour endurance challenge which kick-started at 10am; participants were required to place their right palm firmly on the lot drawn while completing all seven elimination rounds (notably holding water bottles whilst keeping a hand on the car and balancing a ping pong ball on a spoon whilst biting the spoon for 20 minutes) . One by one, the participants died of exhaustion.

Haah. That caught you folks off guard didn't it?

But truthfully after nine and a half grueling hours standing under the hot sun and rain, the last 10  people who didn't get eliminated had much to celebrate as this would be their ticket to Asian Face Off over in Singapore. The 10 Malaysian champions will compete against the 310 Singapore local contestants and 80 other challengers from across the region to win a brand new Subaru car. Note that the event in Singapore isn't a half day thingy like this one. It is actually a proper endurance event and there is no time limit or elimination rounds for the participants to go through. Last year's event was won by a Singaporean after palming a Subaru for 75 hours 36 minutes. He got a Subaru WRX out of it.

The 10 Malaysian leg winners received an all-expense paid trip to the Lion City from the 26th – 31st of October for the finals, a watch worth up to RM1,600 sponsored by Orient and Subaru merchandise which included a t-shirt, cap and toiletries bag, amongst other premium items.

Honestly I'd rather pay for a Subaru rather than suffer. Which was what I did 7 years ago (Motor Image. Take note.) 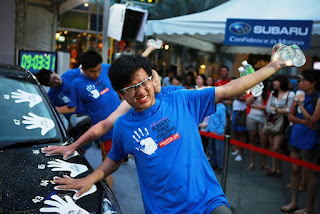 Posted by Rigval Reza at Wednesday, September 12, 2012 No comments: Links to this post

Meanwhile Over In Wolfsburg, VW Offers the Beetle R-Line 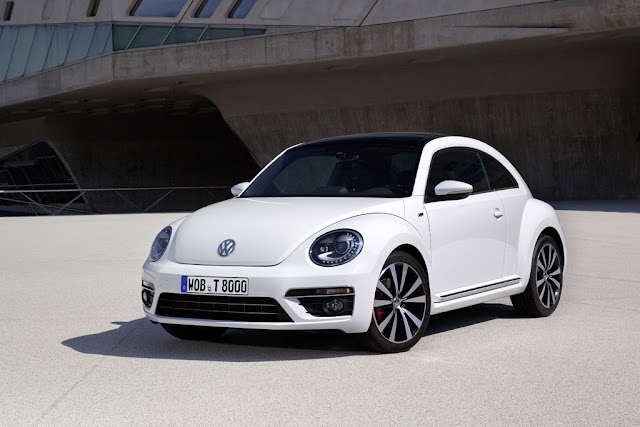 Volkswagen announces tuning parts for the all-new New Beetle and they've only launched the darn car over in Malaysia......

Volkswagen R GmbH has created the independent and sporty R-Line options which can be combined with any of the twelve Beetle colours. Parts of the exterior package are:
- Front bumpers with independent black grained air inlets and chrome surrounds for the directional indicators
- diffuser at the rear
- special body side panels and door mirror housings in body colour
- R-Line logos on the front body beneath the A-pillars
- 18-inch “Twister” alloy wheels
- Machine-polished 19-inch “Tornado” alloy wheels may be selected as an option in black or white with 235/40 tyres
The R-Line interior package includes:
- sport seat system with seats upholstered with an active-breathing fabric in “Kyalami” design
- front head restraints with R-Line badge
- leather-trimmed sport steering wheel, the gear shift lever boot and the handbrake grip with decorative seams in “Art Grey”
- decorative inlays in “Dark Vanadium”
As an option, the seats may be ordered in black leather (“Vienna”) with
R-Line badges on the head restraints as well as on the door sill plates and the leather-trimmed sport steering wheel. The Beetle Sport is available with a 1.4 TSI (118 kW/160 PS), 2.0 TSI (147 kW/200 PS) or 2.0 TDI (103 kW/140 PS). The additional price for the R-Line exterior package is available at € 1,290, and when the interior package is included the price starts at € 1,675.

BUT, in all honesty you'd still look like a poof if you drive one. Unless you're already a poof, or a girl that is. 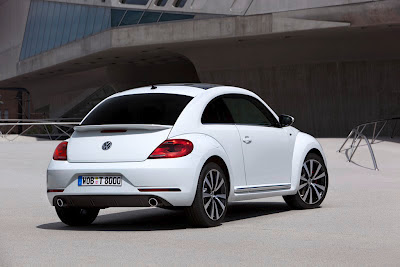 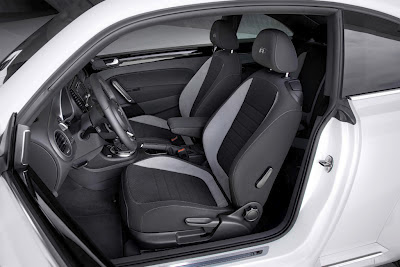 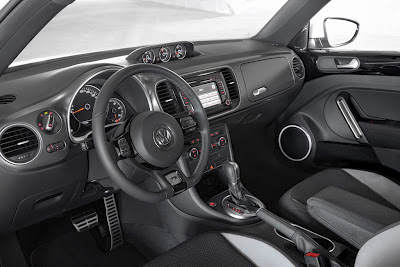 Posted by Rigval Reza at Wednesday, September 12, 2012 No comments: Links to this post 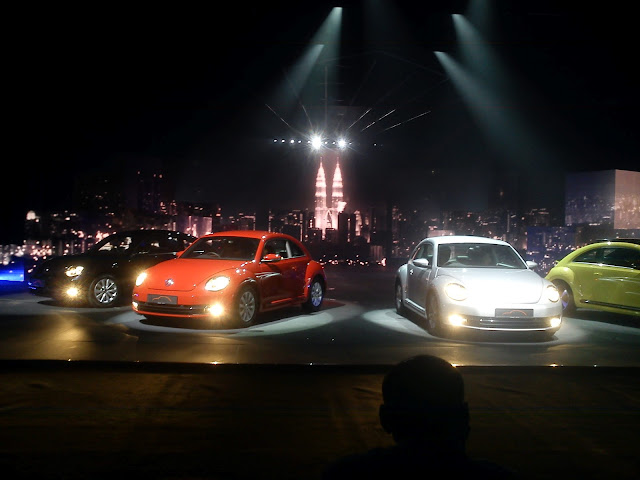 VW Malaysia is really investing in Malaysia. I say this because they've launched the all-new New Volkswagen Beetle with a whole lot of fanfare and hoohaa. The reason I say this is that the launch isn't just limited to members of the media but to the general public too.

Last weekend VW did hourly presentations to media as well as members of the public who had bothered to register their attendance for the event titled 'The Icon is back'. It was a big thing as VW started with a video presentation showing the original Bug and then interviewed local celebrities as well as VW Beetle owners. The curtains was then raised to reveal the all-new New Beetle together with some dancers and some lady singer belting out some number stating that 'the icon is back'. 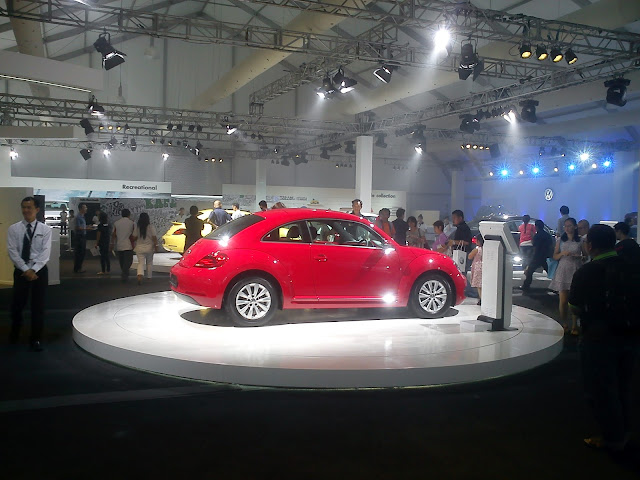 After that little show and dance number which also featured Beetles driving to and from the stage the audience was led to an area where the new Beetle was displayed together with VW's other models which included the first showing of the Volkswagen Amarok 4x4 pickup truck and some people carriers that I have absolutely no interest in whatsoever. The Amarok (pictured below) is a pretty good looking truck though and VW was gauging its response by inviting people to give their opinions on it via a handheld device. I did my best to answer it anyway, stating that "I'd like one in yellow please". 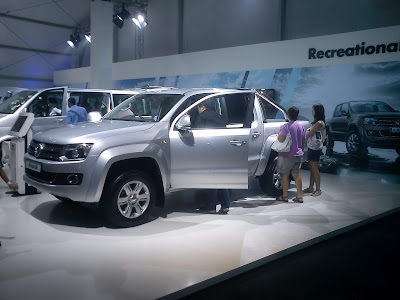 And what do I think about the new Bug then? It's a Volkswagen. It has the same high quality build that we're used to and it looks like a Beetle although I still think they haven't nailed it like how Fiat has done so with the 500 or how BMW has done it with the Mini. It is still a feminine looking car and if you were a straight guy who intends to buy this as his only car, you may be defined as, errr, not so straight after buying one. It still has that slightly girly image to it. Even if you opt for the 2.0liter TSI version that packs a decent wallop at slightly under RM200,000 (without insurance) over the poofy 1.2liter version you will look like you have more in common with the chaps from Queer Eye For The Straight Guy. Not there's anything wrong with that. Unless you're trying to be known as Jason Statham or Donnie Yen that is. 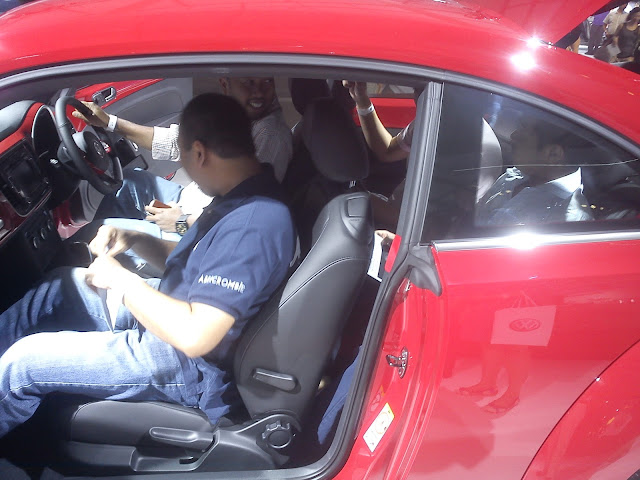 - The Beetle does seat four blokes (the two in the seat are my friends and schoolmates, who happened to bump into the two in the front who are their friends, and therefore schoolmates too - what coincidence that all attended the same session) , but not that comfortably at the rear

The only other issue is that the painted dashboard and door trim which matches the exterior would mean that if you bought a pink Beetle, you will also have to stare at a pink interior. Aside from that one should remember that the Beetle is still a niche car, and not a bread and butter model like the Polo.

And for that I have to give a pat on the back to VW for spending a ton of cash on its launching. I suppose brand awareness is what they're really after. The launch was just an excuse for getting the VW brand totally embedded in the Malaysian public's psyche. Good job to them then. I believe they've accomplished what they set out to do with the launch. 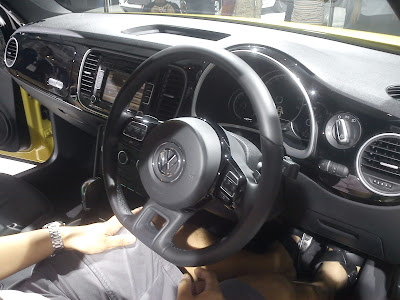 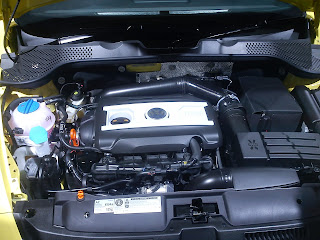 Posted by Rigval Reza at Monday, September 10, 2012 No comments: Links to this post