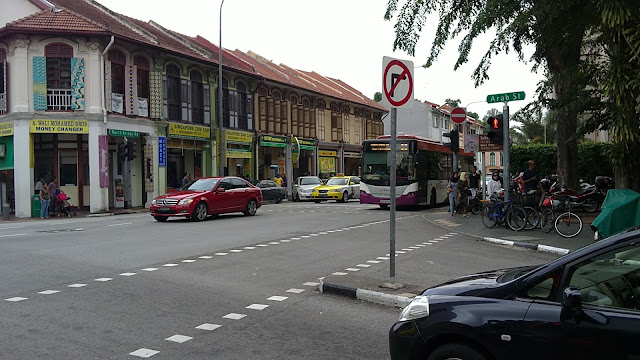 I recently took my family across the border to the Lion City for some shopping and sightseeing. It wasn't a Rest & Recreation type of holiday. It was Arab Street (above) for the wife's clothing material, Orchard Road for more shopping and the Jurong Bird Park for the little girl's sightseeing. My feet felt like lead after three days and then we had to face quite a horrendous jam whilst trying to make it back to KL. But it was a fun filled trip. Lots of things to see and do over there.

The great thing about the trip down south was that it was the first really long trip using the car I recently bought - the Mercedes Benz C180 CGI BlueEfficiency and even after the six or so hours driving back from Singapore I felt as fresh as when I started the journey. Everyone needs to own one of these or better. But let me tell you a secret. You could do the same thing with a Toyota Camry. It is even quieter than a C-class. It isn't as sporty to drive as one buy if you want to feel as fresh as you started your journey, the unclemobile could be your choice. Remember the Unclemobile folks.

Anyway, I was actually quite intrigued by the fact that there are quite a number of newly registered C180 (1.6) C-classes over there. This with the fact that COE (certificate of Entitlement) prices are sky high at over SGD60,000 per car and the very recent tightening of car loans over there (50% downpayment and a maximum of 5 years). A C180 costs SGD 185,000 or thereabouts. Now convert that to Ringgit, it is a bomb. And there are many of them around.

This got me thinking about car prices around South East Asia. The reason being that so many Malaysians out there seem to be complaining about not being able to afford cars over here with the excise duty and other taxes and whatnots. Let me enlighten you guys out there by saying that Malaysia isn't as bad as we think.

Let's take a Mercedes Benz C200 CGI as an example. In good ol' Malaysia the C200 CGI Elegance sells for RM262,000.00. It looks steep doesn't it? With all those zeros behind and all that. Now lets compare the price of the same car elsewhere in the region.

I converted using xe.com's currency converter and I did not pick these figures out of nothing. Note that we are second highest in the list, but our figures aren't that far from other countries where the automotive industry has government protection, namely Thailand and the Philippines. Cars are cheap if you buy those manufactured locally (Toyota in Thailand as an example - you will see that everycar is a Toyota and a fourth or fifth is another brand).

It isn't that rosy in Australia too. Whilst you may think that AUD65,000 is a small amount but a junior exec in Australia may earn AUD6,000 or AUD72,000 per annum, but he is liable to get hit with income tax of between 9.1% to 21% depending on his deductions (The super rich here pay a maximum of 44.9% in taxes, still not as high as Sweeden where you pay up to 56% of your income for 'FREE EDUCATION AND HEALTH CARE'). The best bet is the junior exec gets off with 12.5% average and on top of that a 1.5% Medicare levy (now WHO SAID things were free in developed countries).

Now add to the fact that everything you buy in Australia is susceptible to Goods and Sales Tax (GST)of 10% it gets a little tougher overall. In 2011-2012 there was such a thing as Flood Levy which the junior exec would have to pay 0-0.25% of his hard earned income to subsidize the rebuilding of Queensland after the 2010-2011 floods over there. So as a result, when I was holidaying in Australia in 2011, there are not many luxury compact executives running around. Its either the cost of living is high, or everyone there does not want earthy possessions which are slightly more luxurious than others (I doubt so).

Over in Jakarta, Indonesia you wouldn't want to drive a Mercedes Benz. The traffic is horrendous and everyone around you is in a state of poverty that you are liable to be kidnapped, car-jacked for money or your car simply keyed. You'd want something third world like a Toyota Kijang Innova to run around.

So what are we complaining about? The food here in Malaysia is good, houses aren't as stratospheric as Singapore, our living conditions aren't as crazy as Bangkok or Jakarta or Manila, we don't pay ridiculous amounts of taxes.

Malaysia is the best place to be. Full stop.

Posted by Rigval Reza at Wednesday, April 03, 2013 7 comments: Links to this post