Golf: The Game and The Car

Golf. I tried taking up golfing lessons but I never managed to finish it due to a total lack of interest in trying to hit a very small ball very far away from where I am. The aim of this game I’m told is to use a set of clubs, try to hit the ball into a hole slightly larger than the small ball which is usually at the very least is three to four hundred meters away. There are sand bunkers and water traps as well as areas out of bounds before you can consider trying to clear each hole or round with as little shots as possible. The game is tedious in that 18 holes may take you half a day. Add the 9 hole break for drinks and winner pays for lunch or dinner, it’s a whole day affair. The trade-off for this is supposedly health. But you may either die of sun stroke or skin cancer if you’re not careful from all that tanning or you may suffer from backache trying to follow exactly what your golf pro told you to do while taking that swing. You got at least 3 different angles in the swing and a funny kink in the knee before you're supposedly in the correct position to take a swing at that small ball. It's a method of torture I tell you.


Another reason why this game does not interest me is that you need so many clubs to hit a ball in one direction. You have a driver to ensure the ball can be hit the farthest, you have some irons for closer shots, a wedge for bunkers, a putter for even closer shots. You either have a golf buggy to drive around the course (which is good exercise for the buggy and not you). You have a caddy for lugging your golf cart filled with clubs you don’t use most of the time (which is good exercise for the caddy since he has to carry all the clubs). All the exercise you really get is by swinging that totally awkward 3 stage swing that will eventually cause severe back injury and walking back to the golf buggy and to the club house for a dose of high calorie steak and sandwiches (and beer for some). You don’t actually get any proper exercise. You actually play the game for the thrill of occasionally getting it right, showing off each other’s new set of clubs and getting high on a little side bets here and there.


Golf sets are also bulky and heavy items. You may have 10 clubs at any one time and lugging them around is a chore. Why don’t they invent a multi-purpose handle for them? You carry 2 shafts carried like samurai swords on your back like the ninjas do (how cool is that), one for the driver and one for the normal irons, have screw in heads carried around your waist on a waist-belt. The outfit includes a cool looking load bearing vest to attach that belt with the club heads as well as other golfing equipment. I think golfers will look cool looking like something from an American Ninja movie rather than looking like Government servants on a day off.


Furthermore, why can’t they have invented golf that only uses one club for every type of hole? Its so much easier to play by carrying one club instead of a whole bag. It’s like this, you are a French Foreign Legionnaire and your fort is being invaded by some crazy Bedouins. You have a .22 pistol to shoot at the shortest invader, a .38 for the next in size, a .45 for the bigger man, a .303 rifle for anyone larger than that and you keep changing guns just to suit the target. This is insane; you’d be dead before you know it. I’d like a nice big fat machine gun with unlimited ammunition if thousands of Bedouins came charging at me. Golf should be played like this. One club for all 18 holes. It takes up so much time, space and weight just to hit a small ball. If you want to hit a small ball, try taking up squash. The ball is almost the same size and travels fast in a small confined area.


However, I have to state that with cars going multi-purpose (or one club for all holes) is not necessary. That is why I don’t like MPVs. Too many of them drive MPVs alone and without any purpose for the other 6 empty seats. With cars, I would prefer them focused to doing a few things well rather than everything but not good at any one thing.


Golf. I had a small discussion about the Volkswagen Golf GTi Mk.5 with a friend the other day and he likes the car, its aggression and the design a lot. I on the other hand didn’t. It may be a fantastic car to drive and all that but I told him that the 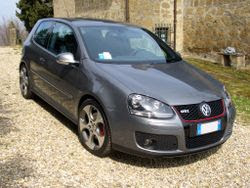 car looked like a mini MPV. I mean, park it beside to its cousins the Audi A3 or the Skoda Octavia or even the larger sized A4, you’d notice that the Golf is at least 2-3 inches taller and looks bigger. I suppose this is because Volkswagen found out from surveys that Hatchback owners like the space and utility of it. But the A3 is also a hatchback on the same chassis design and is still so much lower and looks so much daintier. This is maybe Audi A3 owners don’t go to IKEA as much as their younger Golf owners do. Those with the money to afford an A3 would pay IKEA to deliver the cupboard they bought right to their doorsteps.


The purpose of my argument is that do you need as much headroom if your sitting position is fine? The A3 still had tons of headroom and so does the other cousin, the Skoda Octavia. I love the A3’s driving position as I can bring myself low down and the steering nicely in front of me yet I still have lots of roof. Maybe being around 5ft 8in and not 6ft 3in does help.


But does the purpose of the high roofline actually help other than making the Golf as versatile as a van? Do you need a van in the first place? If you bought a GTi wouldn’t driving pleasure be up there on the list of stuff instead of roof height? I suppose there’s nothing the GTi enthusiast can do since Volkswagen designed the car like that. How unlucky for the GTi enthusiast. Maybe he should have saved up for an Audi instead. Then again, why bother with the brand Volkswagen in the first place since you're in Malaysia and there's nothing really special about owning a Volkswagen here.


The Lancer Evolution VIII MR is a good example of what I am stating here. The aluminium roof in the MR and RS series lowers the Center of Gravity of the Lancer Evolution by about 3mm or about 2.75inches of roof height. Imagine if you had to prepare a race car based on the Golf R32 and the Audi S3. You have the same equipment and specs, but somehow I would think that it would be easier to dial in the Audi to have better handling from this fact of reduced center of gravity. From this point alone, I’d state that the Golf is too big and bulky looking for its own good. It is a good looking car all by its own. But put it beside another 1.6 or 2.0 liter hatchback you will notice it’s actually huge. The Toyota Estima of all hatchbacks. Of course compared to the earlier one this is an improvement, but there is still room for more improvement. I want the next generation Golf to be actually lower in height and have a light and dainty look overall. I think that’s not much to ask.


Now, if I had a choice between the game of golf and a Volkswagen Golf, I’d take the car anytime even though it looks like a mini MPV.
Posted by Rigval Reza at Tuesday, June 19, 2007 2 comments: Links to this post