A Peugeot 308 1.6 Turbo review for CarThrottle.com

Hello people. This is a review on the Peugeot 308 1.6THP Turbo auto that is sold here in Malaysia on a UK based website. One important point I have to state is that the review was written from a Euro-centric point of view, where car prices make sense and you don't get a 308 turbo selling for the same price as a Lancer 2.0GLS or a Civic 1.8 or much cheaper than a 1.6 Golf Mk5 that sold here for RM150K. 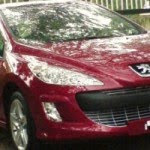 In our market, I guess you HAVE to live with its major handling shortcomming as no car in the RM115K price range would give you a corker of an engine, overstyled French design, a decently large interior and high speed cruising pleasure (not windy road pleasure, mind you). If you were to compare to the others in the price range, you may be swayed by what the Peugeot 308 offers.

The Missus and I are trying to poison my sister-in-law to go get the 1.6 normally aspirated version that costs around RM95K. RM95K for a French car against a RM84K Kia Forte, RM90K Honda City, RM80K Toyota Vios, RM85K for a Mazda 2 hatch, RM99K for a Hyundai i30 and a RM92K Nissan Latio sport hatchback. This is one of the most confusing car markets around as car classes overlap like crazy.  Hopefully this would mean that I get to try that version too.

Have a read guys and gals. The article can be found in detail here. Feel free to comment.
Posted by Rigval Reza at Friday, April 23, 2010 No comments: Links to this post

Another of my road trips. This time it was a wedding that brought me and my family up North, to Butterworth, Penang. Now Penang is another island that somehow has a different flavour from the rest of Malaysia. The people, the food and the places on and around the island give Penang a distinct character that I can never get bored off. Regardless of who actually runs the state things are still the same as my last trip sometime last year. It is currently under the rule of the opposition joint party Pakatan Rakyat. But since they are now in power in Penang they are no longer the opposition party over there, so just ignore the politics, which often makes no sense at all and enjoy Penang for what it is. 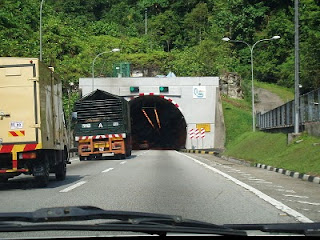 The road trip this time was pretty normal. No B-road jaunts as we had time to catch. I wasn't bored out of my mind as I was driving a decent speed (I'm not telling you guys how fast as that would be detrimental to yours truly), enjoyed the stretch after Ipoh Utara toll where the road goes up, over a mountain range and into a tunnel (called the Menora Tunnel) and then the road goes super windy and very interesting downhill. This is where handling reigns supreme and where thrills are aplenty. 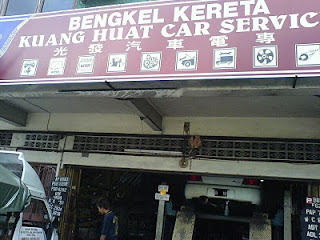 -The unscheduled pitstop in Simpang, Taiping
And if not for an unscheduled 'pit stop' in Simpang, Taiping due to the worn out rubber brackets that held the exhaust up giving up the ghost (and requiring a section of the pipe replaced and new brackets put in) we would have reached Butterworth even sooner than expected. Anyway it still took us about three hours forty five minutes from the Sg. Buloh R&R with that hour long pit stop (hah, I HAVE answered how fast I went - you just have to do the math) and, the food at the kenduri was good and we then headed for Penang Island to check ourselves into a hotel that we had reservations for. 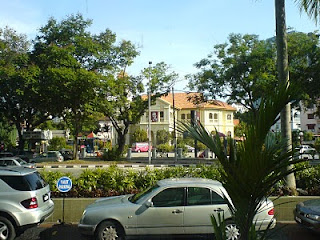 The good thing about Penang is that there are still old and unique buildings here and there. It is a real nice mix of old and new. There are not many places where there is such a mix like Penang. I mean, where can you find a KFC located in an old colonial styled mansion? Or quaint bungalows located right beside condominium towers to the left and right of it? 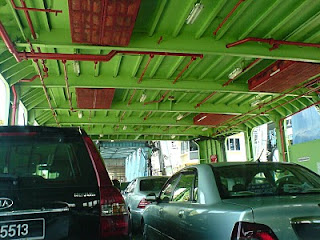 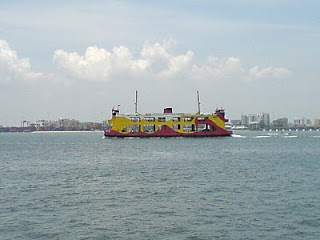 After Georgetown and a trip to Batu Feringgi the night before to visit the night market. We ended up taking the ferry back to the mainland as the kid has not experienced a ferry ride before. It had been eons since I myself took the ferry. In fact, I think ever since the bridge was opened in the mid 1980s, we stopped using the ferry. It is a motoring experience that does not require you driving, with the exception of you driving on and off the ferry. I mean, where else in Peninsular Malaysia can you take your car for a boat ride? I have to put this Penang ferry ride as a Malaysian motoring experience that a person should experience at least once. We headed to Alor Setar for some shopping at Pekan Rabu. This was were the wife wanted to go buy good rojak sauce and those traditional Malay snacks. 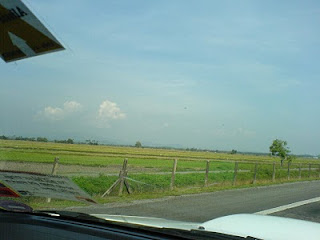 -Kedah, very hot and humid this time around
On the trip back from the extremely hot and humid Alor Setar, we stopped at Sg. Dua in Penang. This is a small town aptly named as its location is between two rivers. The town is located just off the North-South highway and has its own exit (Exit 165). This thing that this little place is most known for to Northerners is that the town is famous for prawn mee, or 'mee udang' in Malay. You turn off the highway and you will find lots of stalls, both small and large, but most of them with the 'mee udang' signage in front of them. Since we were down for a wedding and we had a Penangite among us, he recommended us to the shop above, which was located further in from the roadside stalls and beside one of the two rivers at Sg. Dua. Pretty scenic and a nice spot to enjoy seafood with family and/or friends. 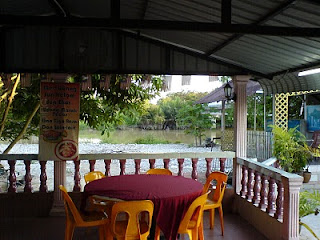 -good food beside a river...ah the life. 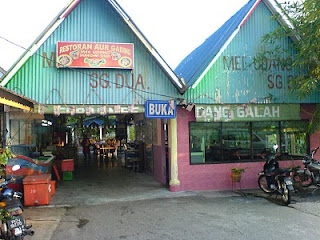 I am not a prawn eating human being, but the rest of the family members were, so at the restaurant they started choosing the size of the prawn or prawns that they wanted in the large (for sharing) bowl of prawn mee, and then wait for it to be served. For a a person who does not like prawns, I have to say that it was pretty good mee served in suculent thick gravy, slightly sweet and spicy with a hint of prawn in the gravy. Since the prawns were fresh, I was told that it was superb. Yes, I know. A non-prawn eater writing a review on prawn mee. Anyway, I had the 3 flavour fish ('Ikan Tiga Rasa') and deep fried small fish in batter, both tasted great. It should since you could choose what fish you wanted. Try finding it, Restoran Aur Gading in Sg. Dua, Seberang Prai.
Posted by Rigval Reza at Thursday, April 22, 2010 No comments: Links to this post

Do Check Out An Article of Mine On CarThrottle.com 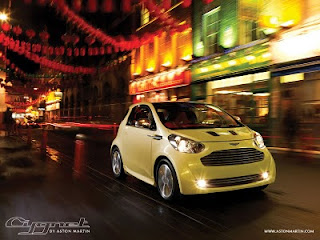 I did a piece for CarThrottle.com titled Brand Marketing Gone Wild: Aston Martin and Ferrari. Its a relatively new automotive website (launched end 2008) and is a start-up venture. It is more Euro-centric and Ameri-centric, with a performance car bias and UK based (with more American based writers). If things go well, I may be contributing there as well as over at Myautoblog.org. Click on the title or here to read the article.
Posted by Rigval Reza at Saturday, April 17, 2010 No comments: Links to this post

Its like driving drunk if you use the phone with a hands free kit while driving - utter nonsense! 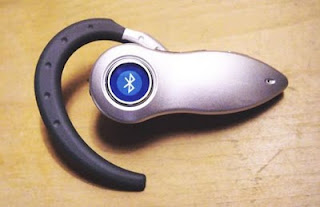 Do read the article and see if you agree with me. I sure hope that Deputy Director of the RTD reads the original news report properly as it's utter rubbish. 200 tests subjects, which I think is too little and there is no real comparison between having a chat with the hands free while driving, eating a burger while driving, talking to a friend about quantum physics and doing extremely advanced mathematics while driving or driving a car with three loud children screaming non stop for 30 minutes. Do click on the title to read the article or click here.
Posted by Rigval Reza at Friday, April 09, 2010 No comments: Links to this post

My review on the newly launched Mazda 2 sedan is out. 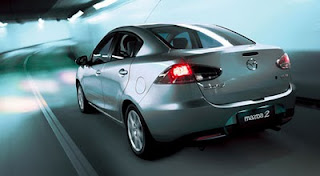 Hello again. The review on the Mazda 2 sedan has been posted on myautoblog.org.  Click on the title or the highlighted part earlier to see what I think of it.
Posted by Rigval Reza at Tuesday, April 06, 2010 No comments: Links to this post

The blue Evo above and two articles on myautoblog.org: the ST185 Celica and about car electronics

Hello. It's a pretty nice Sunday today. Nice as that it's 11.00am and I've just woken up. It has been a pretty good week as far as motoring is concerned. Nothing fancy like driving any cars like what I did last week. Just a nice Teh Tarik session with the boys from LMY snails on Friday night. LMY snails (named after theshape of the turbo) is an unofficial group of us that frequent a fantastic Subaru (all types), Mitsu (a few good ones - a Makinnen, few 7s, 8s and X), Nissan (some 350z, V35 Skyline) etc. all in one tuning/workshop/bodyshop/paintshop and gathering spot named LMY located in a 'secret' building in Subang Jaya.

One good example of a car exclusively tuned by LMY is the blue car in the opening picture on top, a Mitsubishi Evolution 7 that has 460Nm of torque. I am not telling you the horsepower as yet. But that isn't that important as when you drive this car you'd find that turbo lag has been banished and off-boost response and power is amazing. On boost, it was fabulous, scary and epic, yet still very controllable. Never has that much power been so efficiently put down and still so drivable, with the exception of getting used to the racing clutch. I shall write about the driving experience of this car soon. Do not ask me how soon but a drive like the one I had in that car means that it is worth keeping a record of.

Anyway, lets see two of my recent articles posted on my myautoblog.org. One on the Toyota Celica GT4 ST185 and another about electronics in cars.
Click on the highlighted links of each subject to go directly to it.

Do read these articles and any others. And if any of you out there who frequent this site (with the exception of the regulars I happen to know), please leave a few words in the comments section of this blog so that I know you guys are out there.
Posted by Rigval Reza at Sunday, April 04, 2010 No comments: Links to this post