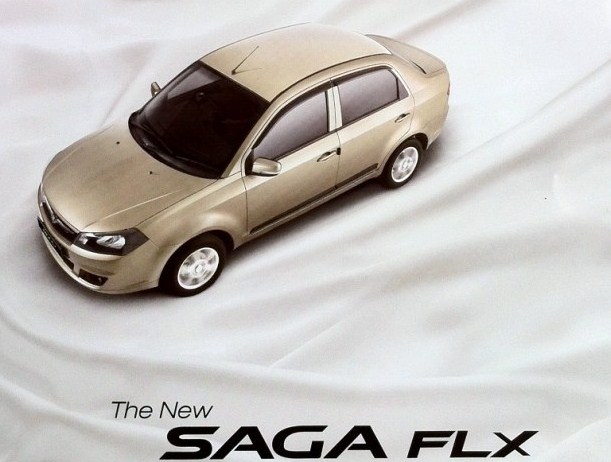 Imagine the recently facelifted Proton Saga FL (Face Lift - so utterly obvious) with another letter slotted in behind the 'FL'. Nothing else happens except the model becomes the FLX (Face Lift X-tra?)

I suppose the extras are incorporated into the now common and slightly better looking Saga FL (The car is less dumpy looking compared to the original).The new additions is a CVT (Continuously Variable Transmission) in place of the ancient (in circa 2011) 4 speed automatic gearbox, ABS (Anti Lock Brakes), EBD, driver and passenger airbags. These extras or more of these extras are found in the Saga FLX Executive Auto as the FLX Standard Auto only gets the CVT as a new toy. It doesn't even get the airbags. This means that the Saga FLX Standard is still stuck in the 1980s.

Oh yes. This main change is the CVT gearbox. It has six virtual ratios and the main reason Proton has adopted this transmission unit is to bring their cars up to date. A four-speeder is ancient these days and does not allow enough ratios for the car to have decent acceleration down below and a low-rpm cruising speed that a transmission with more than four gears would allow. This added gears also means better fuel economy which in turn allows for better emissions. A Proton with Euro 5 emission controls?

I suppose this is the way to go. CVT. But I hope that Proton sourced the CVT from a reliable source and not one that is half baked. You see, CVTs have a belt/chain system that can change through infinite amounts of ratios between the maximum and minimum values. The transmission somehow keeps the engine running at optimum or high revs when you need the grunt and the gears then slur up to the desired road speed. Of course this means a slightly rubber band effect (A Mitsubishi Lancer/Proton Inspira has this effect but a B8 Audi A4 somehow does not -which is why the A4 costs a whole lot more). Personally, the only CVT that is worth driving is the one in the Audi. I've driven Fiats, Mitsus, with CVT gearboxes which I hate.

The other issue is reliability. Even on the latest Lancer GTs it has been known to overheat until Mitsubishi started putting in its own specific transmission cooler (the first batch GTs in Malaysia DID NOT have this option). The previous pig-ugly Honda City had CVT and some experienced problems so much so that when Honda launched the current City, it had a traditional torque convertor transmission. The Fiat Punto of the 1990s had CVT Belt slip problems giving its owners head and heartaches as well as the distributor back breaking warranty claims.

And now Proton offers one in its bread and butter model. I have my doubts. We've seen Honda turning its back on CVT with the latest City on the grounds of costs but this isn't the clincher yet. The clincher is the fact that when the new Toyota Passo was launched over in Japan it had a CVT box but when Perodua launched its latest Myvi, it was still equipped with a normal torque convertor box. Cost savings I suppose, but I somehow believe that reliability issues were the main reason Perodua stuck with the torque convertor box for the new Myvi Automatic.

But Proton seems to be Proton. Always trying to be innovative and slightly ahead of the curve. Remember the time when Proton pushed the Gen2 AND Savvy hatchbacks at the time when everyone wanted sedans? Now, when we see people buying Ford Fiesta, Peugeot 308s, and a whole lot of affordable hatchbacks Proton have no new ones in the market. Proton using CVT boxes may actually be the way of the future, but I am quite worried that they've actually moved forward too soon. Or that Proton bit more than they could chew. Time will tell and lets hope that the gearboxes are reliable. 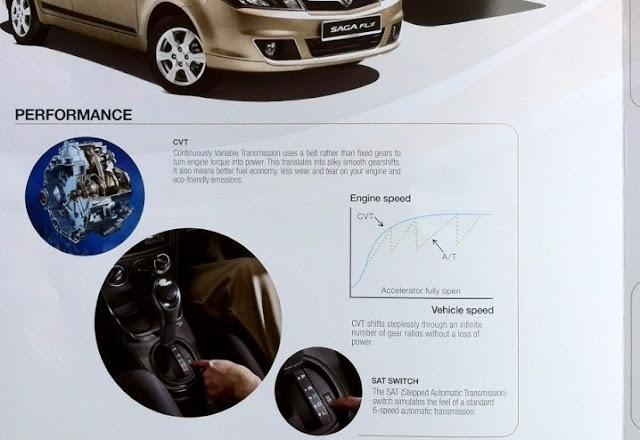 But the real issue that got me writing is the fact my pal Zairul brought up. The SAT Switch that is located in the Proton Saga FLX. What the heck is a Stepped Automatic Transmission (SAT)? Why does Proton think that we need a switch that needs to simulate a normal torque convertor transmission as it does not have a sport mode with manual shift or 'tiptronic' functions at the gear shifter nor does it have flappy pedals behind the steering wheel. If you do not have control over the shifting why bother with the need to feel the slurring of the gears like a normal automatic gearbox when it would be smoother without it?

Does this actual mean that Proton is so afraid that normal users would feel alienated or feel that the new Saga FLX drives like it has a rubber band tied around its gearbox? I think this is the reason as I cannot think of another reason other than this. If it does not allow any semblance of driver control other than P,R, N, D and L  then there isn't any reason to have 6 virtual ratios to simulate a normal transmission.

Its like the Ford Fiesta or the VW Polo. You get a DSG gearbox that you have no control whatsoever and its only the power of marketing that drives you forward. There are no flappy pedals or manual shifting options in these cars too.

So S.A.T.actually means Silly Advertising Thingamagic and not the past tense of SIT, or the short form of Saturday. It does absolutely nothing whatsoever except add another acronym to the Proton Saga. You get FLX, ABS, EBD, SRS, CVT with SAT. Lets end this article with WTF is Proton's marketing people up to again?
Posted by Rigval Reza at Monday, July 25, 2011 4 comments: Links to this post 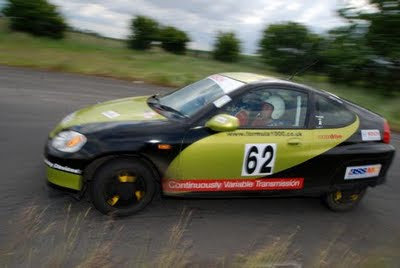 "This hybrid Honda competed in the Formula 1000 Tarmac Rally Series and was officially requested to withdraw due to complains by rival teams stating that the hybrid rally car has an unfair advantage. "
Spoilsports. Being whipped by a skinny tired hybrid of a rally car is so pitiful. And when you start whining and complaining about it, it sounds worse.
Click here to read about it. Written by yours truly, posted over at Myautoblog.org.
Posted by Rigval Reza at Tuesday, July 19, 2011 No comments: Links to this post 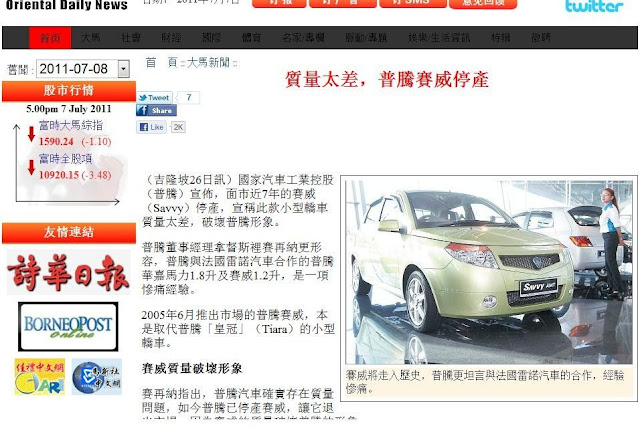 I like frequenting our local mamak stalls and restaurants. Most of us do actually as the food and drinks are cheap and the atmosphere very relaxed. A nice mug of teh tarik and a roti canai would do wonders especially since both items would only cost you RM3.00 and below. It’s 2011 okay, and not 1989 where you could get both items for about RM1.00.
Read more »
Posted by Rigval Reza at Thursday, July 07, 2011 5 comments: 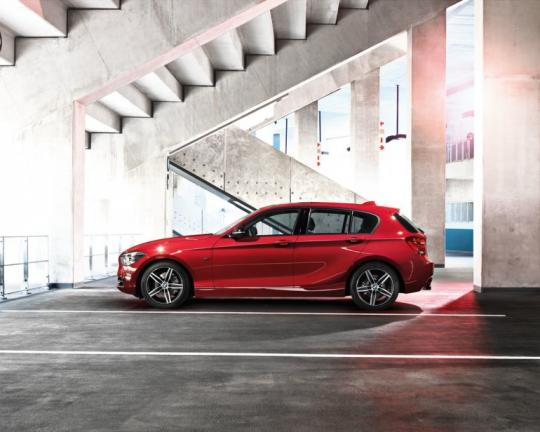 
Click here to find out more about what I think of the new 2012 BMW 1 Series. Posted over at Myautoblog.org.
Posted by Rigval Reza at Wednesday, July 06, 2011 No comments: Links to this post

The Good Die Young: BMW Is Killing Off The 1 Series M Coupe... 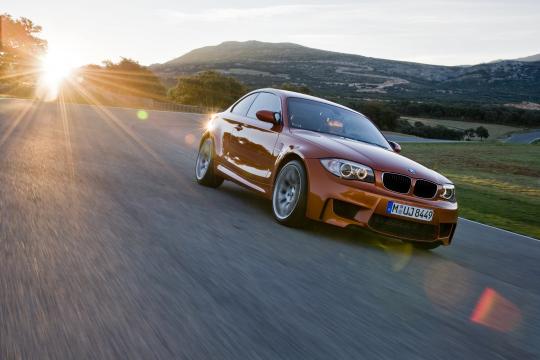 ...after they produce it for one miserable year. And the thing is, motoring enthusiasts aren't really coming in droves to buy this car. Everyone's talking about this car as a return to BMW's E30 M3 roots but people aren't really buying it. They want big huge V8 M3s instead.


"But the question is, is the M Division into selling cars that are actually the 'Ultimate Driving Machines' or up to market forces? The reason I stated market forces because the report also stated that BMW admitted that less than a thousand units of the 1 series M Coupe will be produced instead......."


Click here to read more about it. Posted over on Myautoblog.org.
Posted by Rigval Reza at Saturday, July 02, 2011 No comments: Links to this post 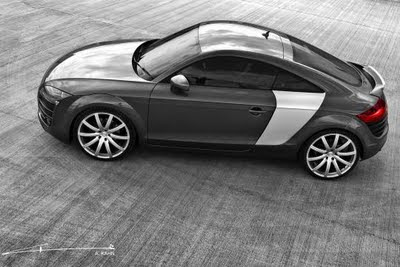 "..... if you're rich and you couldn't care less about your Audi R8 looking like a TT, you should be the one doing such a thing. Everyone is making cheaper cars into more expensive ones so it will be something unique indeed if someone did it the other way round. "


Click here to read about it. Posted on Myautoblog.org.
Posted by Rigval Reza at Friday, July 01, 2011 No comments: Links to this post