Tyre Launch & Test: MICHELIN PILOT SPORT 4 is Launched -& we get to try it out! 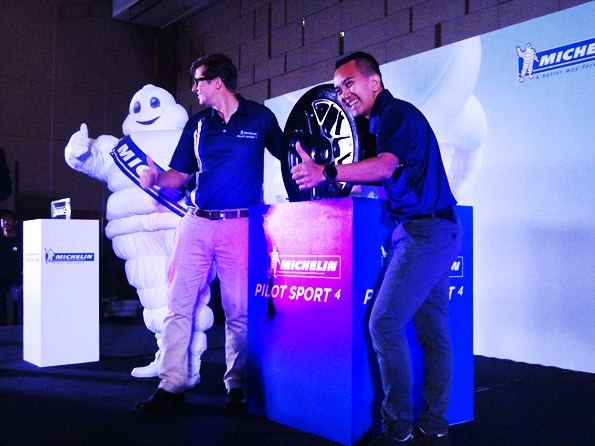 
Michelin has launched the ultra high performance MICHELIN Pilot Sport 4 here in Malaysia. The Pilot Sport series of tyres have been been one of the tyres that have been the choice of driving enthusiasts globally. This time, the new Pilot Sport 4 improves on its predecessor. It offers more innovation and technology that would increase every aspect of performance and safety for drivers seeking that ultimate drive. 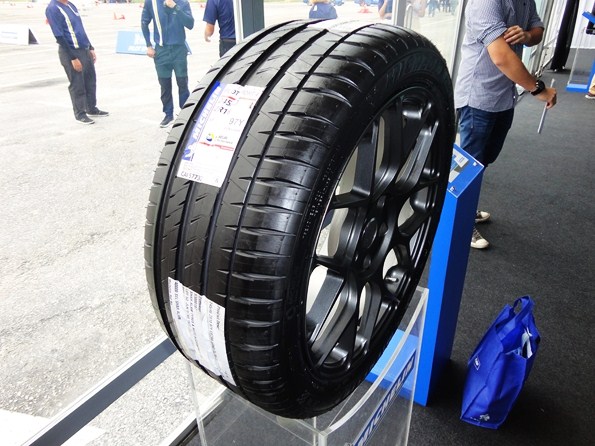 According to Mr Pascal Nouvellon, Managing Director of Michelin Malaysia, the Pilot Sport 4 is designed for drivers who do not compromise on safety on the road whilst wanting driving enjoyment, handling accuracy and being in control in all situations. Even in extreme circumstances.

The PS4 surpassed its mainstream competitors in an internal test conducted in August 2016 in the Michelin JKN and JARI test facility in Japan. This tyre is the first tyre in the Michelin range to feature Michelin's Dynamic Response Technology Construction method. The tyre consists of a belt with hybrid aramid and nylon reinforcement that allows the tyre to withstand high centrifugal forces and maintain contact patch stability at very high speeds. This ensures high traction, reactiveness, better handling and better control when driving on the road. 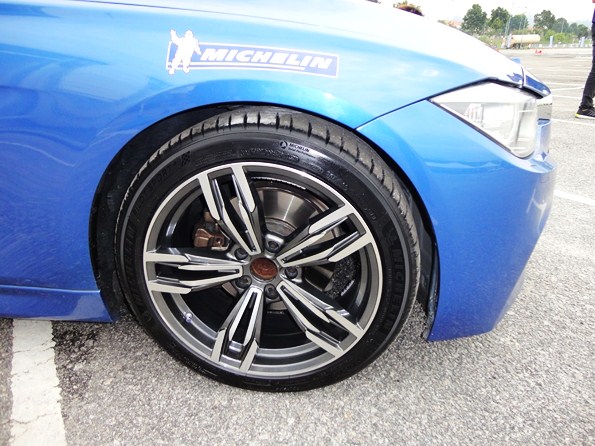 Another feature which allows the tyre to deliver better dry handling performance is the new tread pattern. The PS4's tread pattern takes after the Michelin tyres used in the Formula E racing championship. The unique tread is able to handle high performances of the Electric Race cars which have very high torque electric motors. Since they are race cars, they also can direction quickly and all of these have to be controlled by one tyre in both wet and dry conditions.

Aside from that, the PS4 has functional elastomers and hydrophobic silica (I suppose this would mean water allergic silica compound in plain English) in them. This increases braking efficiency and tracion on wet and dry roads. There are deep longitudal grooves that help remove water which would reduce the risk of aquaplaning.

On a similar note, Mr Pascal also mentioned that Michelin spends at least 600million Euros in total on synthetic and natural rubber. So this was where some of the research results went into - the Pilot Sport 4. Do also note that with ultra high performance tyres, there is actually more natural rubber than synthetics. The natural stuff still performs way better than the man-made stuff.

It also looks pretty good too. Michelin has put on a bolder design for the outside sidewall. This look is more premium and has a 'velvet look' according to them. One more thing is that Michelin also claims that the tyre life has also been increased from before. A very good thing.

The tyre will be available in 23 sizes from 16 to 19 inches and prices start at RM481. The Michelin Pilot Sport 4 is manufactured in Thailand for our region and has its own 'ST' markings on the sidewall to differentiate from the colder climates.

Trying out the Michelin Pilot Sport 4 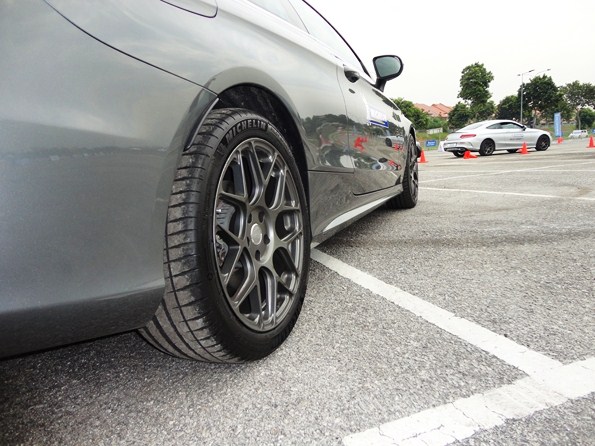 And lucky thing is that they allowed us to have a go at some cars set up with the PS4 as well as a competitor's tyre. The chosen competitor was the Bridgestone Potenza RE003. We were lined up to try a few laps each in two BMW 320d M Sport and two more Mercedes-Benz C200 Coupe. Each of the cars were shod with the PS4 and the RE003 respectively. The location of choice was the badly surfaced, pock marked, slightly bumpy car park area beside the Setia City Convention Center in Shah Alam. An apt choice as the surface actually takes after our bad Malaysian roads. Part of the laid out circuits (two separate circuits) were also wet to simulate conditions.

I had a go in the very nice looking C200 Coupe AMG Sportline first. I was asked to go through a slalom after accelerating, brake, turn slowly to a stop and then accelerate to around 80-90kmh to which we were then hit the brakes at full force on a wet surface. This will engage the anti lock brakes (ABS) and also show us how the Michelin performs compared to the Bridgestone. 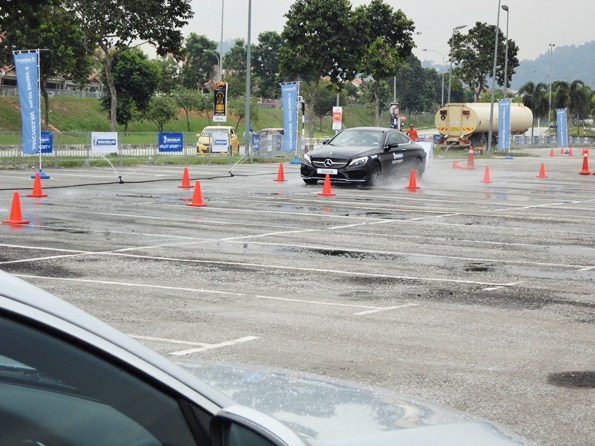 I must say that I loved the interior of the Mercedes Coupe. It is a beautiful place to sit in whilst driving ridiculously fast through some cones. That interior is so much more expensive than what a RM300,000 car should be. And before I get carried away about how nice the Mercedes was, let me say that on the slalom with the C200, the PS4 felt grippier at the rear and the RE003 was more playful, and wanting to come out more.

As for the ABS, at full pressure from 80-90kmh, the PS4s are more consistent in both runs I had with the car. Both stopped way earlier than the RE003 and more consistently. From what I saw, the PS4 stopped at least 4 meters shorter on average than the RE003s. As for brake feel and tracking. Both felt stable under full pedal pressure though. 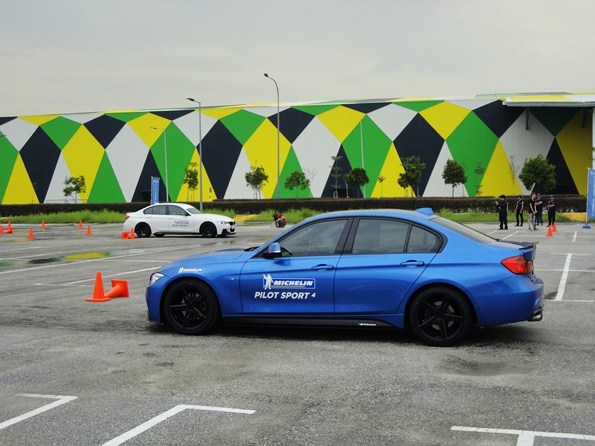 Now in the BMW 320d M Sport, aka the 'taxi' (as it sounds all clattery at idle), it was a better drive. I was asked to do an even more higher speed slalom followed by a nice U-shaped bend and onwards through an much more trickier slalom (where the cones were spaced closer but with more steering input required) and to a stop. This time it was even better. The taxi was so well balanced that I had to push it really fast through the cones in order to really feel the differences between the tyres. 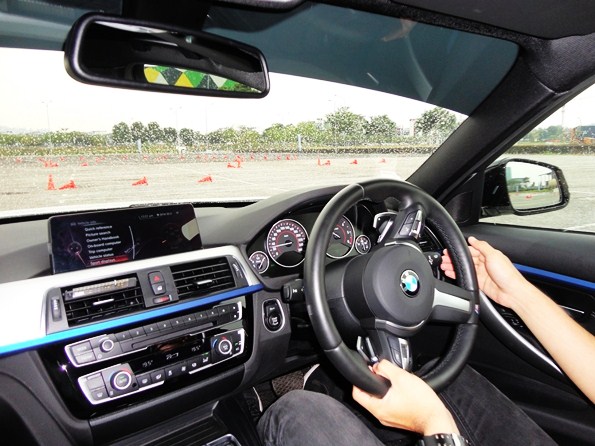 The high speed slalom simulated abrupt lane changes or high speed corners and the 320d taxi was brilliant through it with both brands of tyres. I must however say that with the PS4, it felt more predictable overall. The car felt more connected both in front and at the rear. With the 320d taxi it was hard to to. It had ample torque to kill the tyres and allow oversteer but it was also so nicely balanced (that BMW 50:50 weight distribution thingy) until everything felt so progressive in it at really high slalom speeds. Hello, the tail of the taxi was nicely coming around to assist me. But I must say that its that extra ounce of predictability and how it controls everything together that made the PS4 the better tyre in terms of predictable, safe performance.

So what's the bottom-line? The tyres are oh, so suitable for Malaysian roads. This is for those that want a very predictable, consistent UHP Tyre.

Another bottom-line? Well, the taxi drives a bit better than the C200 Coupe in-extremis. A more balanced chassis. But after you sit inside the C200, the 320d does feel like a taxi after all of that opulence.

Tyre sizes down below after the photos. 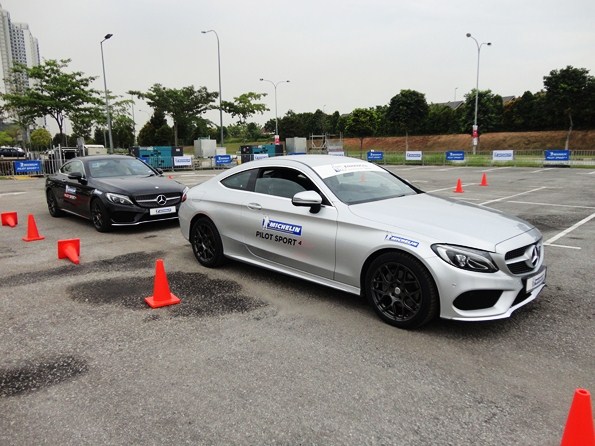 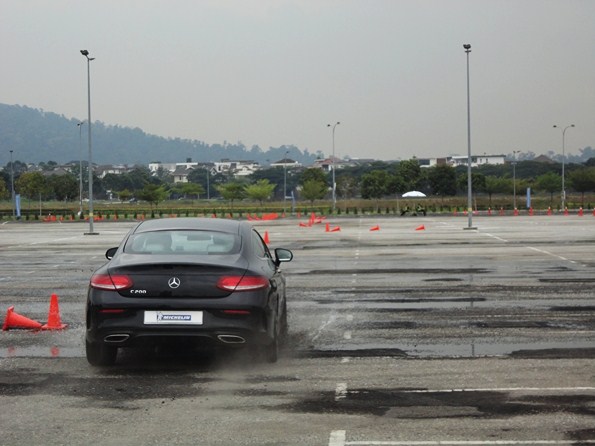 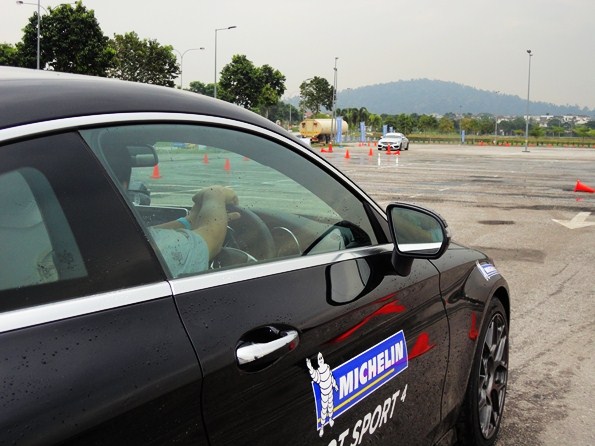 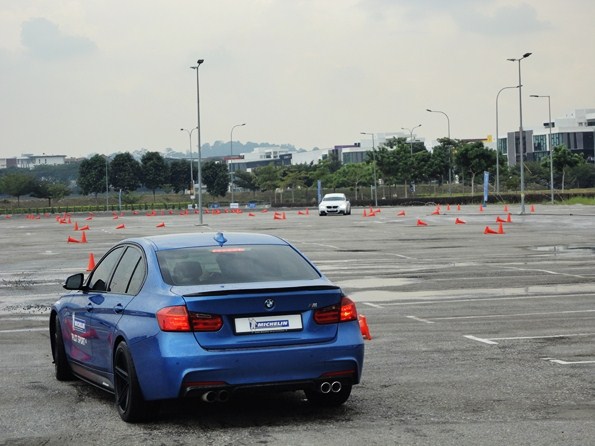 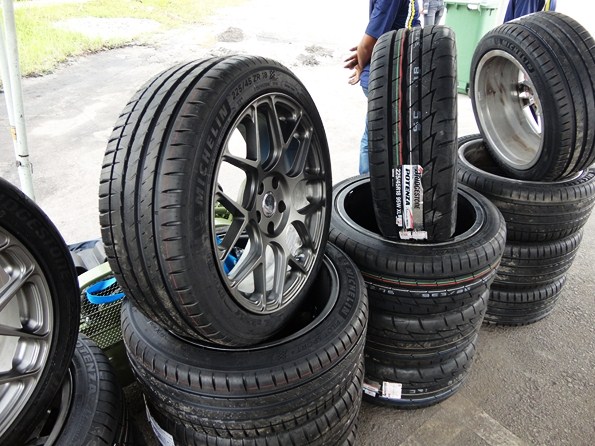 Bridgestones beside some Michelins 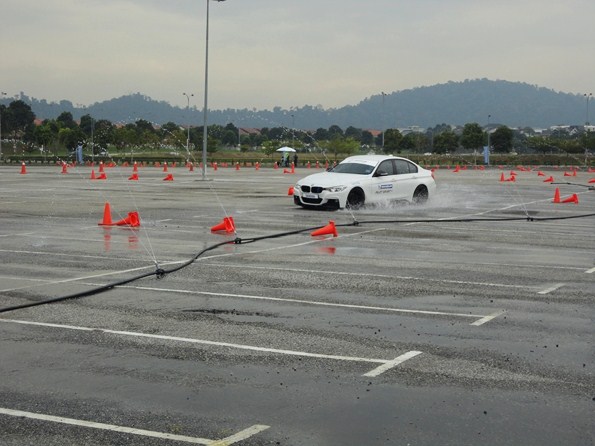 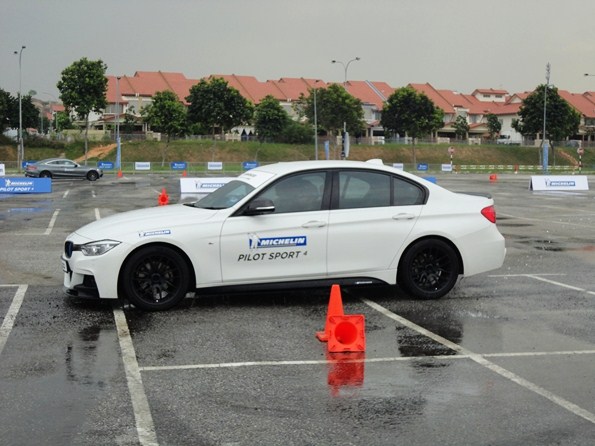 Anyone noticed the self sponsored event, the organizers mounted their PS4 tire wrongly on the wheel, the inside of the tire is mounted on the outside face of the wheel ( refer to the picture which shows the stack of tires).

So were the same set of tires being used on the test cars?