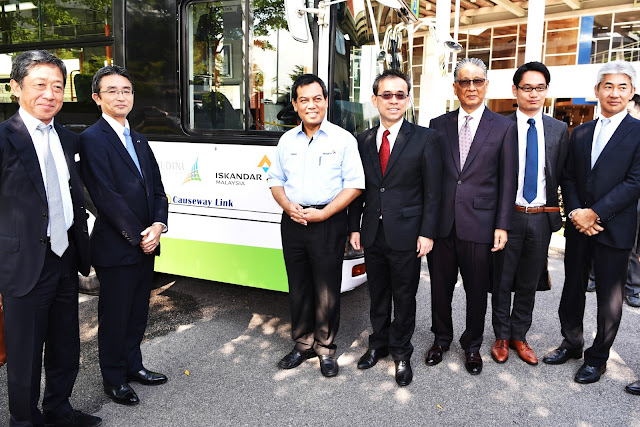 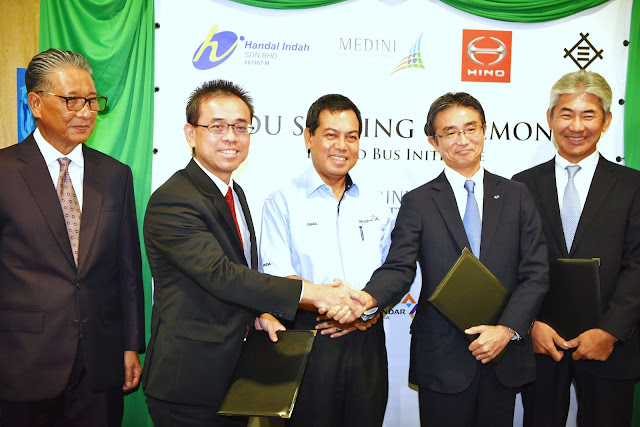 Mitsui and MIM had invited HINO to conduct its trial run through Medini City for a period of five (5) months beginning early July 2017. The bus will be operated by Handal Indah and there will be six routes for the trial run, one of it is the Iskandar Puteri route that allows commuters to travel from Puteri Harbour Ferry Terminal to Larkin Sentral via Medini.

This first of its kind trial run will give rise to the future use of hybrid technology in Malaysian buses. Such a bus would be designed like the hybrid cars we see today, where it would have an internal combustion engine powertrain coupled to an electric motor and battery system. This type of bus would have the potential to be marketed and sold as an Energy Efficient Vehicle (“EEV”) in the future. This may result in reduced taxes for bus operators if such forms of transport is deemed applicable for any EEV tax exemptions.

The HINO Hybrid Bus that is on trial is powered by Euro 3 diesel engine and an electric motor system. This hybrid bus has the advantage of improving fuel efficiency with the combination of powertrain systems  Since it saves fuel, and can run on electricity, the hybrid technology should reduce CO 2 emission making it more eco-friendly. 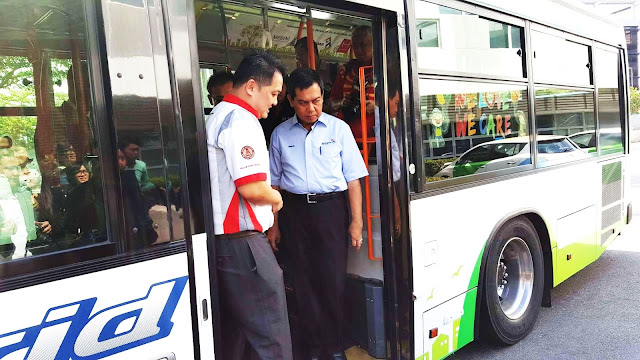 The hybrid bus is also designed with wider air suspension for extra riding comfort and is also built with a low-floor chassis for easy access by its passengers. It also has the flexibility for special needs and is able to cater capacity of up to 75 including standing passengers.

But I believe it is the fuel saving part of this trial run which would be closely monitored by the operator. If it does save on diesel fuel bills in the long run, it would most likely be adopted by various parties after this. It is because of this simple fact that HINO (and the relevant parties) are excited that this HINO Hybrid Bus will be able to tap into a new market segment in Malaysia in the near future. 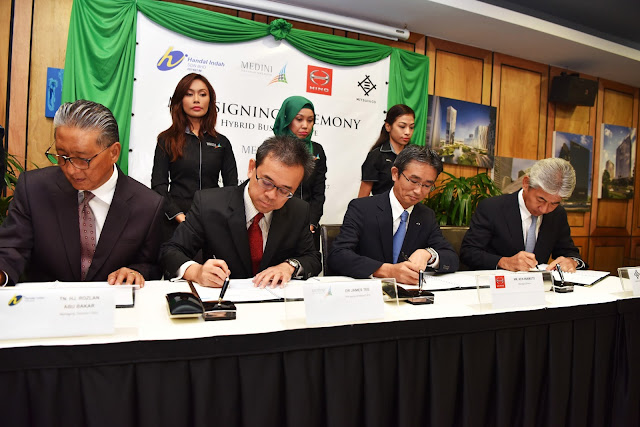 In order to make things official between the parties herein, a Memorandum of Understanding (MOU) was signed earlier today between the parties mentioned above. According to Medini, the MOU is signed at a perfect time as it is aligned with Iskandar Malaysia’s Low Carbon Society Blueprint, where it aims to reduce carbon intensity count in Iskandar Malaysia by 58 per cent by the year 2025. The introduction of hybrid bus could potentially be part of a future modern fleet of public transportation in Iskandar Malaysia, where they can offer economical and clean public transport system.

Interesting times ahead, especially in terms of public transportation in Malaysia. 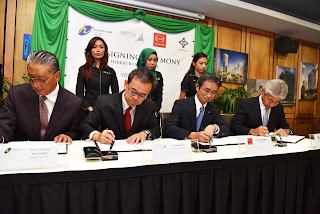 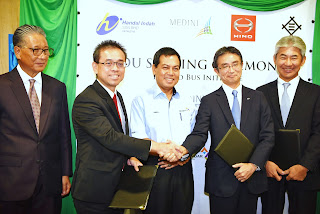 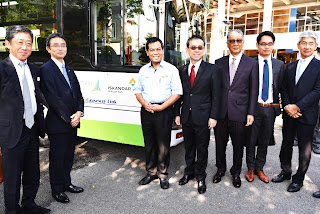 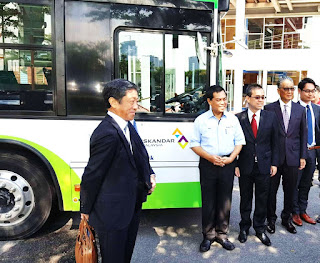 the first hybrid bus in Malaysia.

Indah. The trial run of the hybrid bus will go on for five months starting early July 2017. There will be

six routes for the trial run, one of it is the Iskandar Puteri route that allows commuters to travel from

Blueprint, where it aims to reduce carbon intensity in Iskandar Malaysia by 58 per cent by 2025. The

in Iskandar Malaysia, where they can offer economical and clean public transport system.

initiatives that contribute towards these two agendas. As such, the possibility of having hybrid

busses transporting people across the region is something very exciting and inspiring,” Datuk Ismail

Medini City, the Central Business District of Iskandar Puteri, is a catalytic development within

Iskandar Malaysia led by MIM. With its vision of becoming the Icon of Future City Living, Medini is

paving its way as a smart city development. A shareholder of MIM, Mitsui brings with them a wealth

of experience in smart city development in Medini. Mitsui is also collaborator of HINO for future

produce a smart and sustainable community where residents, visitors and investors alike can

experience a place that is uniquely liveable, connected, efficient and safe. By delivering smart

solutions like the hybrid bus initiative, we look forward to seeing local bus operators including hybrid

bus models in their fleet.”

Being the first bus with hybrid technology to enter Malaysia, HINO Hybrid Bus, has the potential to

be one of the Energy Efficient Vehicle (“EEV”) in the future. Powered by Euro 3 engine, this hybrid


bus. Apart from that, the hybrid technology reduces CO 2 emission, hence it is environmentally

friendly. Designed with wider air suspension for extra riding comfort, this is a low-floor designed

passengers. Thus, HINO Hybrid Bus will venture into a new market segment in Malaysia with a class

of its own in near future.

Continuous improvisation is required to ensure the success of this project. Mr. Ken Iwamoto,

advantages for smart city project where he added on to say, “Unique aspects of commercial vehicles

include their comparatively large size and loading capacity, the long distances they travel, and their

wide array of uses and places where they are used. Taking into account these varying conditions,

HINO Motors considers type of environmental technologies that would be suitable. By providing

users with optimally equipped vehicles, we believe HINO Hybrid Bus has the advantage in providing

Department said, “The role of Handal Indah is to provide the most efficient, reliable and friendly bus

service to the commuters. We embrace change by constantly assessing and improving the public bus

service with the new technology. We are keen to move towards a smart transportation to introduce

the community at large.”

After the signing ceremony, participants get a glimpse of the hybrid bus.
Posted by Rigval Reza at Thursday, June 15, 2017