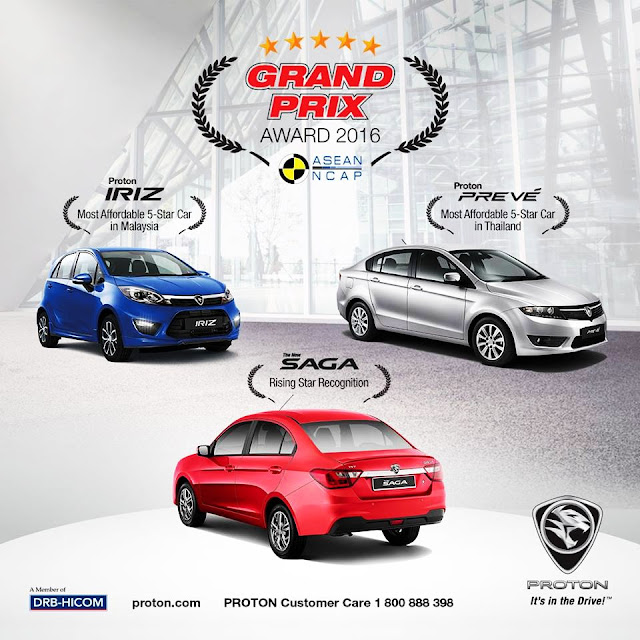 Proton has also won a slew of awards at yesterday's ASEAN NCAP Grand Prix Award 2016 which were held in conjunction with ASEAN NCAP'S 5th anniversary and the STOP THE CRASH ASEAN 2016 event held at Sepang International Circuit over the past two days.

a. The Most Affordable 5-Star ASEAN NCAP Car in Malaysia - Proton Iriz;

b. The Most Affordable 5-Star ASEAN NCAP Car in Thailand - Proton Prevé; and

The company is very proud of all the awards, especially the new Proton Saga. The Saga had risen from just 1-Star in 2012 to 3-Star in 2013 and recently 4-Star when tested in 2016. This is why it was awarded the Rising Star award winner.

The new Proton cars are a vast improvement over the earlier models (new Perdana, Persona, Saga, Ertiga). The Iriz, whilst still without the powertrain improvements that was put into the new Persona (of which the Iriz was based upon) was developed from the outset with a strong and capable structure. It may be a few years old already but its safety features are bang up to date. The same goes to the Preve, it may have its flaws but it is a safe car.

Not much to comment but kudos to Proton for the achievement. 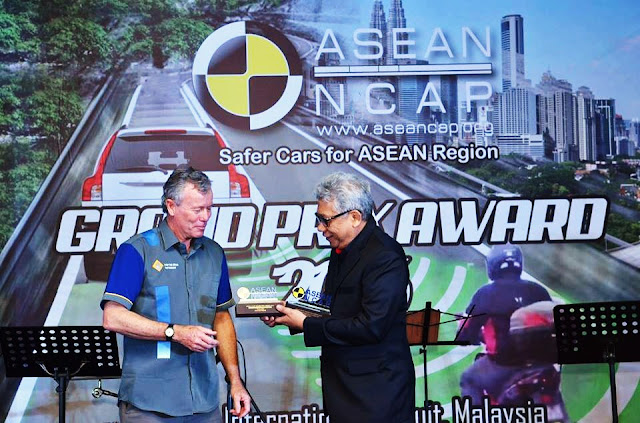 Sepang, 29 November 2016 – PROTON Holdings Berhad (“PROTON” or “the Company”) received 3 awards at the ASEAN NCAP Grand Prix Award 2016 for its compact car Iriz, executive sedan Prevé and the new and refined Saga. The awards presentation was in conjunction with the Stop the Crash ASEAN 2016 event which is currently held at Sepang International Circuit for 2 days, from 29-30 November 2016. The event is also held in conjunction with ASEAN NCAP’s 5th anniversary.

"We are truly humbled and very pleased with this recognition. It is a culmination of the tireless efforts by our team in PROTON to give the best value to our customers. PROTON takes the safety aspects of our customers very seriously and is honoured that our efforts in this area are recognized today." said Dato' Ahmad Fuaad Kenali, Chief Executive Officer of PROTON.

The Iriz and Prevé for all variants come fully loaded with active and passive safety features such as electronic stability control (ESC), anti-lock braking system (ABS), electronic brake-force distribution (EBD), traction control, brake assist, hill-hold assist, 2 airbags and a seat belt reminder system. Complementing the safety features of the car is the Hot Press Forming (HPF) body structure, which is a German technology adopted by PROTON. The HPF steel provides up to 5 times more strength than normal steel. This, in turn make the cars more stable and more importantly making the cabin stronger to give better protection to our customers.

"Our latest and more refined 3rd generation Saga, the Premium 1.3L variant, comes equipped with the advanced safety features such as the ESC, ABS, EBD, traction control, brake assist, hill-hold assist, airbags, ISOFIX and top-tether, with all-round sensors at just RM45,800.  The evolution of Saga reflects PROTON’s determination to improve and refine the legendary Saga from just 1-Star in 2012 to 3-Star in 2013 and recently 4-Star when tested in 2016 and therefore befitting the recognition given to Saga as the Rising Star award winner.  We could not be more appreciative of the recognition of our hard work and continuous belief in our products and this will further incentivize all of us in PROTON to work harder to give better products and services to our customers," Dato' Fuaad added.

ASEAN NCAP or New Car Assessment Programme for Southeast Asia is a collaborative effort between the Malaysian Institute of Road Safety Research (“MIROS”) and Global NCAP. It is an addition to the NCAP family, targeted to elevate vehicle safety standards, raise consumer awareness and encourage safer vehicles in the region.