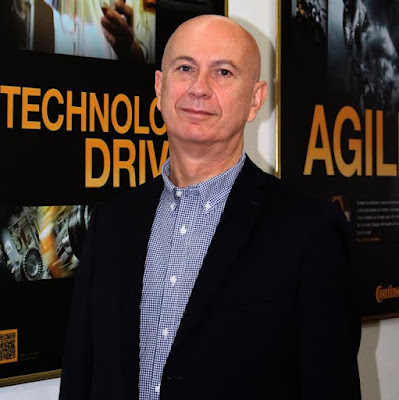 The international tyre company Continental has announced the appointment of Carlos Bernabe as Plant Manager for its Passenger & Light Truck Tyres and Two Wheel Tyres manufacturing facility in Alor Setar, Malaysia. He joined the Continental Malaysia team in Alor Setar on January 1, 2017, succeeding Juergen Jacobs Dowling, who has been leading the plant for the past three years and is currently pursuing his career within Continental in South Africa.

“My main objective is to drive together with the Alor Setar team the business here towards highest performance and deliver top products to our customers in Malaysia and the Asia Pacific region”, stated Carlos Bernabe.

Prior to his new role, Carlos Bernabe was the Production Manager at Continental Timisoara, Romania. Before that he worked for around four years at Continental in Shanghai, China heading the manufacturing & quality operations for the APAC region and previously he held various assignments in other countries like Portugal, France and Brazil. Altogether, Bernabe has been with the company for nearly 37 years bringing with him a vast experience in tires manufacturing management at international level and he holds a diploma in Mechanical Engineering and Quality Management from France, his country of origin.

For those who are interested in the Alor Setar plant, the tyre plant in Alor Setar first began its operations on 20th December, 1979. Continental acquired the full shares of the company from Sime Tyre in 2012 (so you now know where your Sime Tyres were made back then). Since then the corporation invested around EUR 15 million in the tire plant in Alor Setar, mainly in upgrading the production equipment and processes and employs around 1,100 employees. The Tyre plant produces Passenger and Light Truck Tyres as well as Two Wheel Tyres mainly for Malaysia and for the rest of the APAC market without China and India.

With that, I wish Mr Bernabe a very 'Selamat Datang' to Malaysia. Hope he loves the food, the humidity, the heat, the rain, the food, the hospitality, the scenery up north and the food.
Posted by Rigval Reza at Tuesday, April 04, 2017