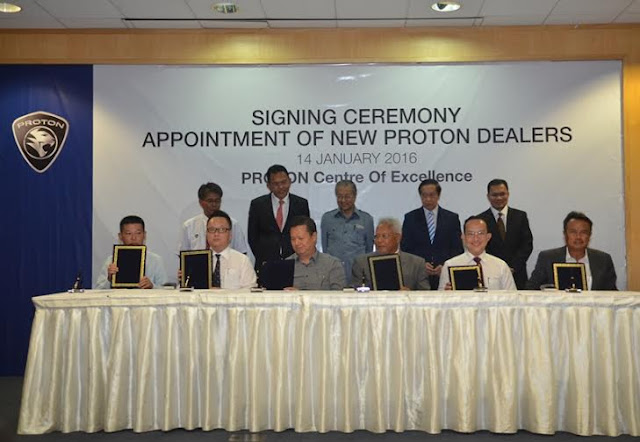 In line with the Proton and Suzuki MoU and License Agreement that was signed last 15th of June 2015, All the twenty nine (29) Suzuki 3S and 4S outlets will be outlets which will have both the PROTON and SUZUKI logos. This was made official after the signing ceromony where most of the outlet operators entered into this new arrangement with Proton. 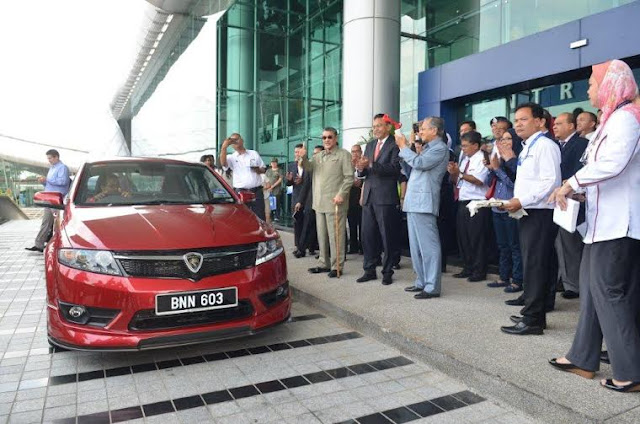 These outlets are now recognised to be part of PROTON Edar outlets, will continue to have the ability to provide service and repairs for the existing 48,000 SUZUKI customers in Malaysia. The new set up also provides opportunity for the SUZUKI dealers to expand their business to include Proton cars. These outlets will still be the official outlets to service Suzuki vehicles. Any other outlets without the Proton and Suzuki badging on its premises are not equipped to handle Suzuki vehicles.

This is officially the start of a goodbye of sorts for Suzuki Malaysia Automobile Sdn Bhd. The start of the winding down of Suzuki operations as an entity and the begining of the collaboration with Proton. 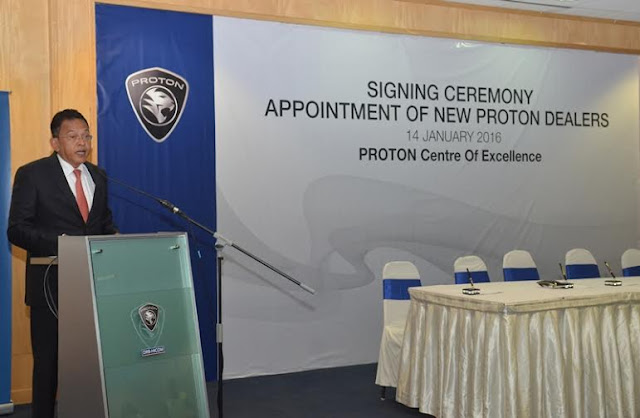 A lot of questions were thrown to the management of Proton especially on the company's future plans. While we have earlier heard that Proton will come out with three new models for 2016, it seems that Dato’ Abdul Harith Abdullah, CEO of Proton (pictured above) had mentioned that there would be four new models this year and one should be out every quarter. Four models. I personally believe that the Proton Perdana will roll out first, followed by the Saga and Persona replacement models and this should obviously be followed by the collaboration vehicle where the official press release (below) had stated that it should be in production by the end of 2016.

Which Suzuki model they're going to be either rebadging first is the million Ringgit question. At first, when they inked the JV agreement last year, I had a thought that it could be one of the Maruti Suzuki India cars, like the Celerio. But after looking at it and how third world the car is I have now changed my mind. My bet in on a different vehicle.

Dato Abdul Harith also mentioned that the Proton Iriz was relatively new and it was not a candidate for replacement (Sales of the Iriz has been consistent, with about 5,000 bookings monthly but with a take up rate of bewteen 2,400 to 2,600 depending on loan approvals - Banks are no help these days actually). So we know that Proton still has that small hatchback, replacement for two of their small sedans and a large executive sedan based on a Honda Accord. So where does that leave us? 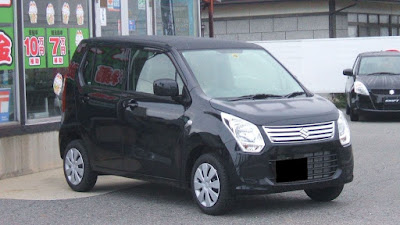 Something smaller I suppose. A city car in the mould of the Axia. But head on competition isn't beneficial so what could the car be? Something niche I say. Let's just hope that the end of the year Proton gives us the Suzuki Wagon R badged as a Proton. Remember the Perodua Kenari aka Daihatsu Move? A tall mini RC (recreational car) that is popular in Japan. Also called a tallboy car over there and this Suzuki version could be a genuine niche player that could do well. The Perodua Kenari was well received, and could be popular with the Malaysian public.

I don't know. Just a wild guess. Let's just wait and see. 2016 is set to be an interesting year for Proton. Over the past two years they had spend RM2billion for expenditure. We shall see what the four models that are in store from the amount spent. The first car should be launched sometime in March 2016.

Still sad to see Suzuki go though. But with the small sales volume and limited models (that the Malaysian public warm up to), it was bound to happen. I do hope this JV goes well like the one Suzuki has in India with Maruti. 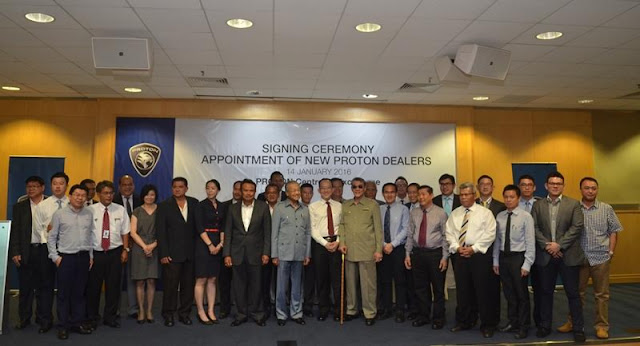 All the twenty nine (29) outlets will be outlets which will have both the PROTON and SUZUKI logos. These outlets, although have been recognised to be part of PROTON Edar outlets, will continue to have the ability to provide service and repairs for the existing 48,000 SUZUKI customers in Malaysia. The new set up also provides opportunity for the SUZUKI dealers to expand their business to include Proton cars.

“The industry is aware that SUZUKI is going to end sales of its own brand models in  the Malaysian market after the Memorandum of Understanding and License Agreement were signed between the three parties, PROTON, DRB-HICOM and SUZUKI on 15 June 2015. The rationalisation of SMA operations was originally expected to be completed within a year but it has progressed earlier than planned to realise the next phases of the partnership. Today, I am happy to announce that the collaboration is seeing the first of many exciting milestones and providing PROTON with the advantage of additional dealers network, vendors, skilled manpower, platform sharing and technology know-how,” said Dato’ Abdul Harith Abdullah, Chief Executive Officer of PROTON.

“Suzuki Malaysia Automobile is proud to have worked alongside and served our amazing partners and customers here in Malaysia over the past decade. The consolidation of SUZUKI’s existing showrooms with PROTON further strengthen the synergy between both brands ensuring the constant delivery of automotive after-sales services that our customers are accustomed to.” Said Mr. Masashi Fukuda, Managing Director of Suzuki Malaysia Automobile echoing the same sentiment as Dato’ Harith.

“The existing Suzuki car owners can be rest assured as their automotive needs such as the after sales services and warranty coverage with the use of genuine Suzuki parts will continue to be managed and covered. They can continue to send their cars to these outlets which are strategically located across Malaysia,” continued Mr. Masashi Fukuda.

Under the collaboration, Suzuki, which is strong for its technology and expertise in producing smaller engine segments, especially in the A and B segments categories would complement PROTON’s long range product plan. The development of this collaboration gives PROTON the opportunity to tap into SUZUKI’s strengths, which will result in the maximising of volume potentials, reduction in development lead time and expedite time-to-market. This can be achieved through the technology sharing and the ability to maintain cost efficiency in collaboration with SUZUKI.

“We are happy that the Malaysian government supports such collaboration as it is also in line with the National Automotive Policy (“NAP”). NAP promotes strong and renowned global automotive player like Suzuki, to be a collaboration partner to PROTON. The collaboration will provide PROTON the opportunity to grow internationally, leveraging on SUZUKI’s presence worldwide while PROTON continuously develop and produce cars that meet international standards and requirements,” Dato’ Harith  added further.

"SUZUKI is known to be a good partner. For example, SUZUKI's partnership in India with Maruti grew from strength to strength. In 2014/15 alone, their market share was 45%. We are confident that PROTON and SUZUKI will foster similar or even stronger bond," said Dato' Harith.

“The collaboration will also see the assimilation of good and best in class practices. As SUZUKI exits Malaysian market, it displays genuine commitment to make this collaboration successful according to the agreed terms. In that, PROTON is honoured to be part of its several successful partnerships worldwide and we look forward to a more fruitful journey in our transformation initiatives to increase market share,” said Dato’ Harith.

SUZUKI has already ceased its production line in Malaysia and as part of the collaboration, PROTON has access to SUZUKI talents, models, platforms, powertrain and other automotive technology. SUZUKI will then provide specific technical assistance for the products while it leverages on PROTON’s vast local distribution and service network for its rebranded cars.

SUZUKI is a renowned global automotive player and is the third (3rd) top sales automotive company in Japan and has presence via production plants in 21 countries. What more to say, SUZUKI has also sold approximately 3 million cars in a year globally with 1.2 million cars coming from India.

“With the additional twenty nine (29) new 3S & 4S outlets, this will add to the strength to the New PROTON in providing enhance quality facilities at all our sales and after sales services outlets nationwide,” ended Dato’ Harith.

Start of production of the collaborative product is expected before end of 2016. 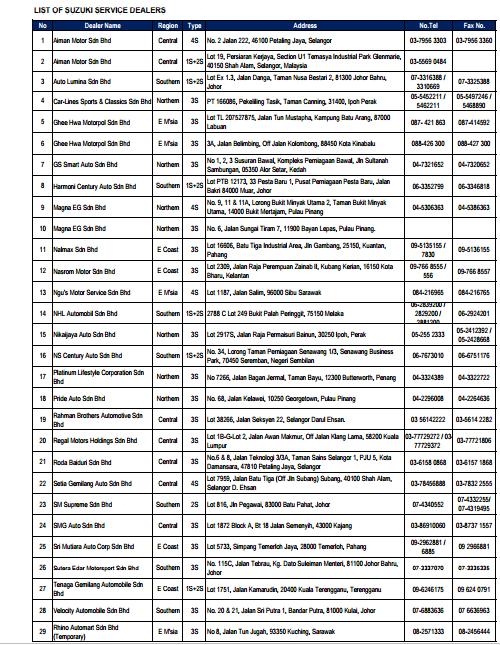