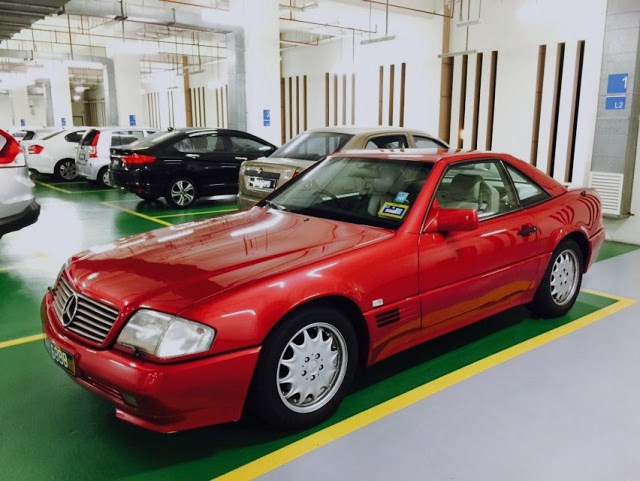 The 1970s and 1980s were a period where automobile development reached a certain peak. It was when manufacturers perfected the basic monocoque chassis based on the technology at that point of time. It was a pinnacle of sorts as we see manufacturers keeping the same model chassis for decades instead of the current practice of a new platform every five to seven years like most do today. We had cars like the Lancia Delta, born in 1979 and carrying on until 1995.

We had various generations of Volkswagen Golf Mk1 and Mk2 going on sale for over ten years concurrently in the 1980s and we had those Mercedes Benz cars like the W124 E-Class, the W126 S-class, the R107 SL-class and the R129 SL-class that came after the R107. These cars were deemed by their makers to be able to be in production for over a decade in terms of chassis design and only with changes to engines and equipment (to keep up with the times and electronic technology basically). It was a period of some stability in terms of automotive technology and it showed in the cars at the time. 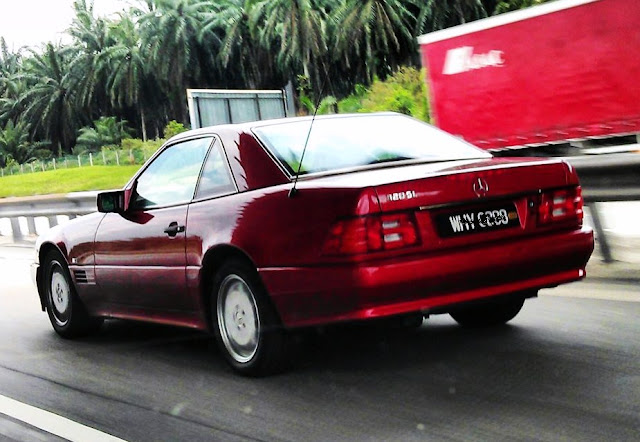 Some weren't really good cars in the sense that they had shoddy build quality like the early Lancia Deltas. But this was due to the fact that the company manufacturing them (Fiat) sucked in terms of material quality choices (bad steel used) and temperamental Italian workers assembling the cars. Not entirely their fault but in terms of design, the little Lancia worked. Of course, Lancia was almost always in doldrums during that period.

So we come to something over-engineered and well designed like the cars Mercedes Benz made in the 1970s and 1980s. These were engineering marvels that to this day has lasted in terms of classic modern styling and durability. Built like vaults, the W124 E-class, W126 S-class and the SL-class roadsters were basically so well designed and utilised the correct materials that to this day, many of these cars are still plying the roads globally. The W124 was in production from 1984 to 1997, the W126 from 1979 to 1991, the R107 SL 1972 to 1989 and the W129 from 1989 to 2002. All of these luxury cars were produced for over a decade. Imagine, the same essential chassis being on sale for that long a time with only minor facelifts here and there.

The R129 was first designed way back in 1984 and was based on the chassis of the W124 E-class. When launched in 1989, it had a bucketload of innovative technology and was actually ahead of its time in many aspects. It was one of the few cars in the 1980s and early 1990s to have (optional) electronically controlled damping. It also pioneered the automatic extending roll-over bar that made convertibles even safer than before. It also was one of the first few roadsters that was sold with both a detachable hardtop that was fitted over the folded canvas soft top meaning the owner had the option of beign fully protected from the elements if he wanted to. As it was Mercedes Benz's halo car, it could be bought with every conceivable luxury offered by Mercedes Benz at the time.

Now while it lacked from traditional styling of the outgoing R107 SL, the new R129 was well received and like the R107, was a favourite amongst royalty, movie stars, corporate moguls, the jet-setters and a whole lot of racing drivers too. Instead of all upright and traditional, it had styling by Bruno Sacco and featured a design that actually still looks darn good to this day. It was low, sharp and wide. It had the proportions which were quite close to perfect in terms of modern roadster styling – a long bonnet, a low chiseled look to it and seamless styling. In some aspects, I think the design of the R129 is future proof as it still looks modern to this day. 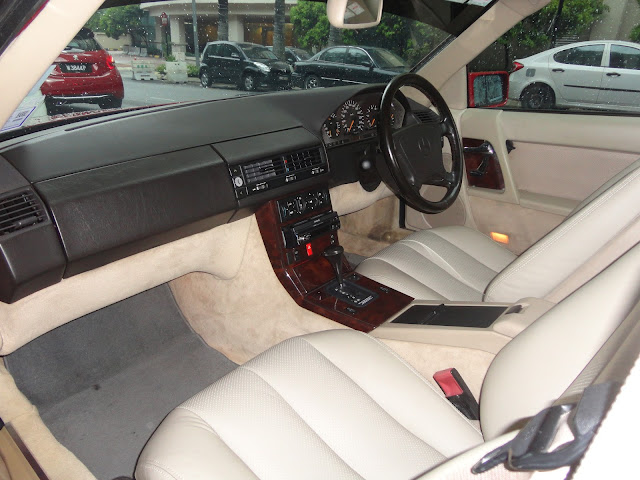 So I get to drive this SL-24 a good twenty over years since it left the factory. How does the old girl feel? Bombproof. You open the door, slide in to its leather seats and close the door. And you close the door of a bank's vault door. It's no joke. You may have heard the same line being written or blurted out by millions of auto journalists about how solid Mercedes Benz cars from this era are and you are not going to hear any different from me. The car is like a rock, a vault, a battleship in terms of construction. How the door closes, how the switchgear feels is all solid and weighted. The high quality plastics in the dashboard look like they'll last forever. In short, it's old, but but put any new Japanese car beside it and it still shines in terms of build quality.

The way it drives is another thing to admire. Nothing feels light. Everything has some heft in it. From the throttle pedal to the brakes and the handbrake lever has weight that you have to overcome. Once on the move, it feels like rolling thunder, as it gathers speed. Plant your foot down, the longish nose slightly rears up and you're off. And unsurprisingly, not a squeak from the interior.

The in-line six purrs smoothly and is pretty torquey even though initial road testers claim it to be a little down on torque. I suppose it may only put most of its power above 4,500rpm, but it is adequate most of the time. Anything under 9 seconds to 10kmh is adequate by today's standard. Of course, you get that (almost) big engined feel with the 3.0liter engine. And a decent enough soundtrack too. The gear change in the SL-24 are typically old school automatic, this means it changes gears with a gentle thud instead of quietly slurring in the background. And the acceleration is quite leisurely with the gears spread far and wide in order to cover acceleration and cruising at the same time.

The steering however, a recirculating ball type steering system, whilst is great at filtering out the road imperfections is also good at filtering out almost all feeling (but good at keeping fatigue levels down if you do actually go on a very long drive). Super numb and slightly slow compared to a rack and pinion steering system but at least it is nicely weighted and accurate once you actually tell your brain that when you do turn the steering wheel, the wheels eventually turn too. No, it isn't that bad. Maybe as bad as some electrically assisted power steering these days. Actually, it could be as bad. Or worse, depending on how you look at it. 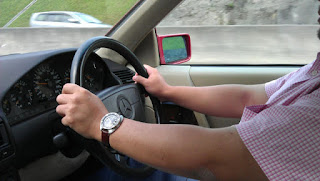 But whatever it is, I managed to take it through a series of bends in the dry and the SL-24 actually surprisingly rewarded me when doing so. Great front-end grip after you've put faith into the car, ignoring the vague steering, and a very obedient rear. Outside line at about 100kmh, tap the brakes into a right hander at about 85-90kmh, apply more steering lock as the turn gets tighter whilst balancing the throttle (yes, being rear drive it is throttle adjustable) putting in more power to try loosen the tail and then back adjusting the throttle for the immediate left hander before powering on right after the apex. 90-110kmh was then done after that in a just a few seconds.

The old girl basically handled a reducing radius right hand corner and then a slightly wider left hander with a poise that defies its age. The car was equipped with its standard 225/55/16 sized tyres which did not protest at all. 231hp basically isn't really enough to trouble the chassis which was made to handle the over 326hp that the 500SL made. Being typical Mercedes, the same chassis could fit them all. Including the later in lift (1992 onwards V12 600SL with over 400hp on tap).

So yes, the Mercedes Benz 300SL-24 was and still is a brilliant car to drive. It was a technological tour-de-force of its time and still looks good to this day. Good ones can be bought in Malaysia for between RM55,000-RM70,000. If you are looking for a reliable modern classic. I would recommend this. 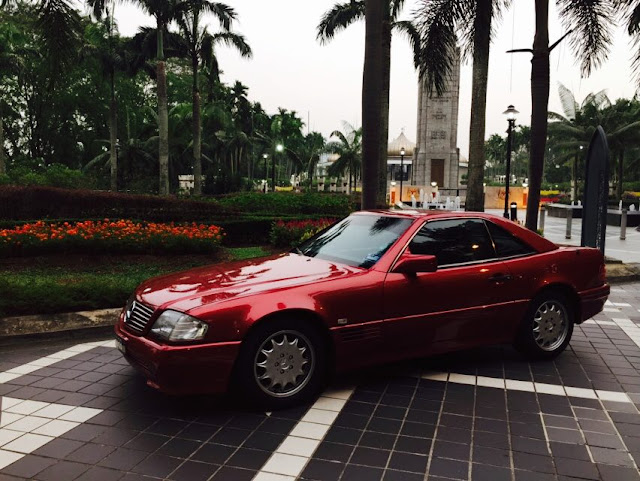 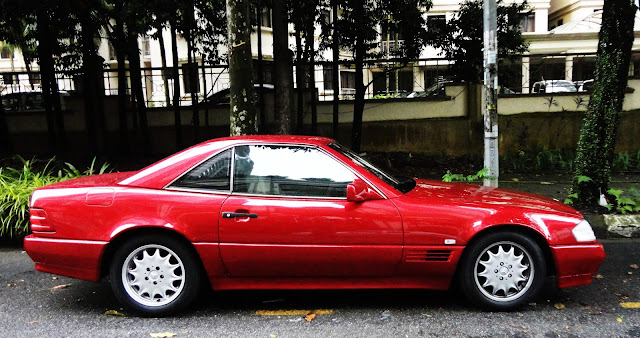 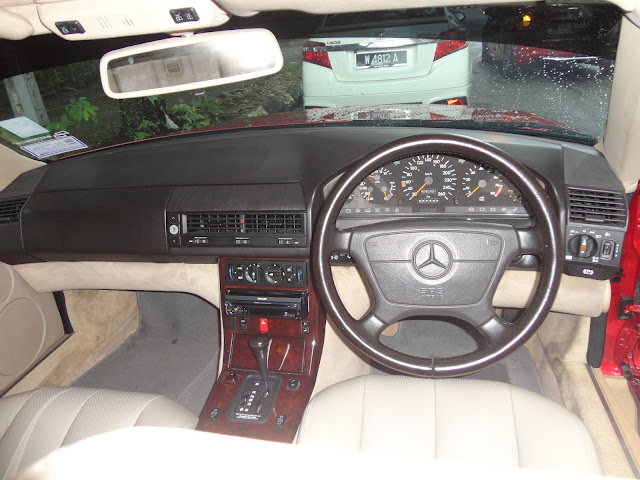