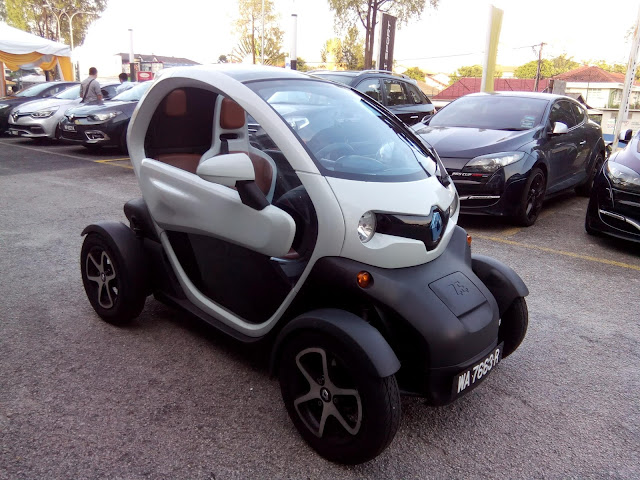 I had a short drive in the fully electric Renault Twizy and I must say that it does feel  enjoyable for such a small package. The car is fully electric and is only slightly larger than a quad-bike. It is really compact and could be the ultimate city car where commutes are totally within the suburbs or the city center. To the market and back. To the children's school and back. Or to the golf club and back. 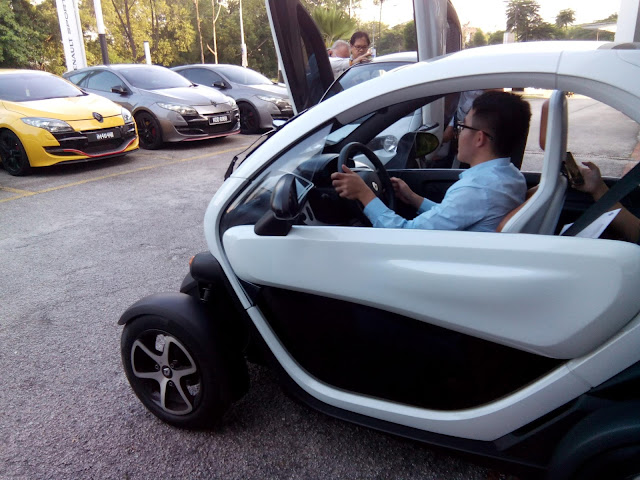 At just 2.34meters long and 1.23 meters wide the 450kg fully electric car is super compact. it is essentially a quad bike with a roof and scissor doors. The interior is sparse and built to keep its weight low. The dashboard is kept simple and everything is easy to reach and use. Hard plastics everywhere except for the steering wheel. You could hose off everything if you wanted to by the looks of it (but don't).

The 13hp /57nm  torque electric motor powers the rear wheels and can power the Twizy up to a speed limited to 80kmh. The seemingly low max speed is there for safety reasons as it really is tiny. I personally would like to keep to normal urban and suburban roads instead of travel in one using our tolled highways like the NKVE. After trying out one I imagine maxing out at 80kmh and a Prime Mover comes barreling down at the Twizy at around 90kmh flashing its lights at the small and tiny car in front of it. Maybe on a downhill section it could do 90kmh. But let's just use it around town shall we.

But anyway, for what the Twizy is meant to do it does it pretty well. The car, being a zero emission plug in electric vehicle is actually an absolute blast to drive. The car may sound like a glorified electric blender with its motor whine but the rest is very traditional motoring. If fact, it is good that there is a whine. It gives you the feeling of some mechanical assurance whilst driving it. As for why it is traditional motoring, it has four skinny tyres (which allows early slip and slide = fun), all round disc brakes (without any ABS, EBD or traction control = purity of brake feel) and an uncorrupted, unassisted steering wheel (more purity of control here) . All of these details stitched together equals to the Twizy being fun.

The four tyres give a smallish contact patch with low slip tolerances. Good for low rolling resistance but actually very good for the car being enjoyable at low speeds, allowing you to dance around a little once you get used to the car's characteristics. This is coupled to the direct steering wheel that is unassisted (but very tolerable due to the skinny tyres) and full of feel. You could actually be a bit aggressive whilst cornering in the Twizy and it will reward you with a little slip from the front wheels and an some actual tail action if you pass this initial push. This is surprising. This electric car is actually darn fun to drive. The only thing modern and different is the fully electric drive train - press the D button for drive and it moves forward, R button for reverse and a N button when stationary. The park brake is underneath the steering wheel. Everything is simple and straightforward. Oh, initial throttle response may be a little dead but once on the move, everything feels instantaneous. Up to 80kmh, that is. Wish it could do 100. Miles per hour.

I suppose even the electric drivetrain isn't really modern or futuristic. It's just like an golf cart with a lot more power. The only thing really innovative is the fact that the Twizy has a range of 100km and its lithium ion battery simple needs to be charged for about 3 and a half hours from a normal electric socket. Which is pretty quick compared to some which require an overnight charge.

Personally, I now think that the Twizy is practical as an urban roundabout which one must drive within its set limits. These limits are quite simple - a tiny car meant for the short distance commute, seats only two (or one if you buy the Cargo which omits the rear seat and adds a lockable hatch), max speed is 80kmh and has no side windows (just canvas coverings which you need to clip on if needed) as well as no air-conditioning (due to its open windowless styling. Hey, it's tiny. Even a Smart Car will think its Arnold Schwarzenegger.

What else? RM71,888 for the two seat Urban and RM73,888 for the single seat Cargo. Prices are on the road without Insurance. Road tax is RM10 per annum. There are service intervals of 10,000km or every six months. A two year/50,000km manufacturer's warranty for the base vehicle and a three year/50,000km for both the traction battery and the electric drivetrain.

I suppose the only real drawback here in Malaysia is the price. Being fully imported and the fact that there is no tax exempt even for a fully electric imported cars makes the Renault Twizy a toy only for those that can afford the luxury of something so tiny. A shame as its carbon footprint is so low. 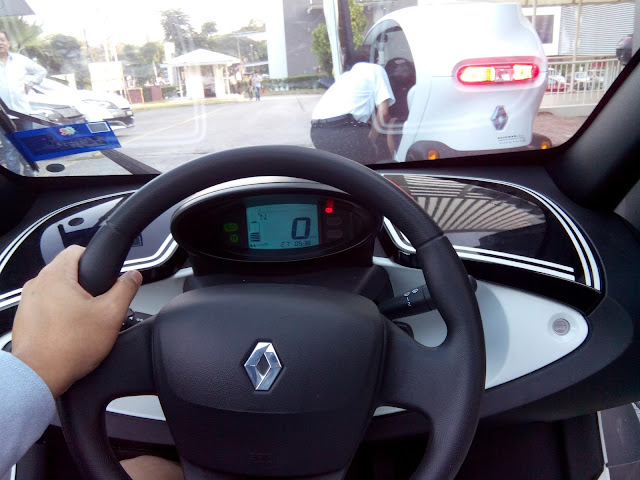 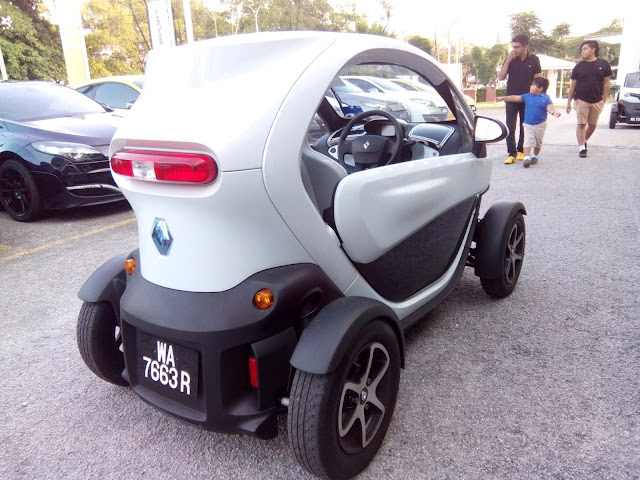 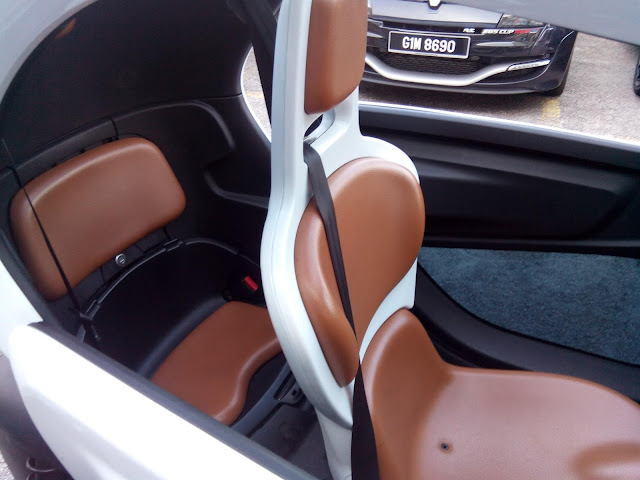 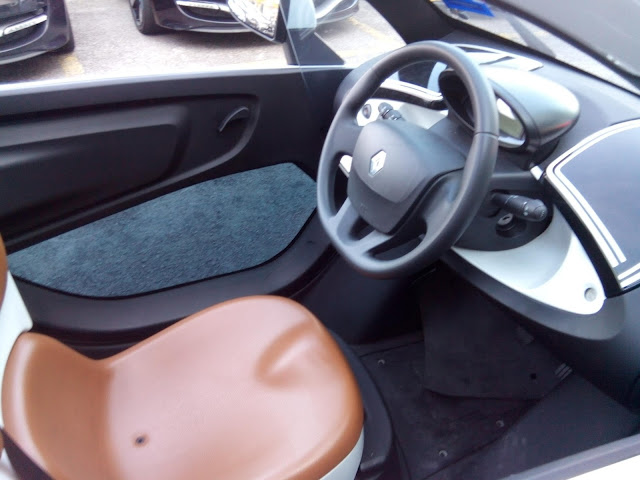 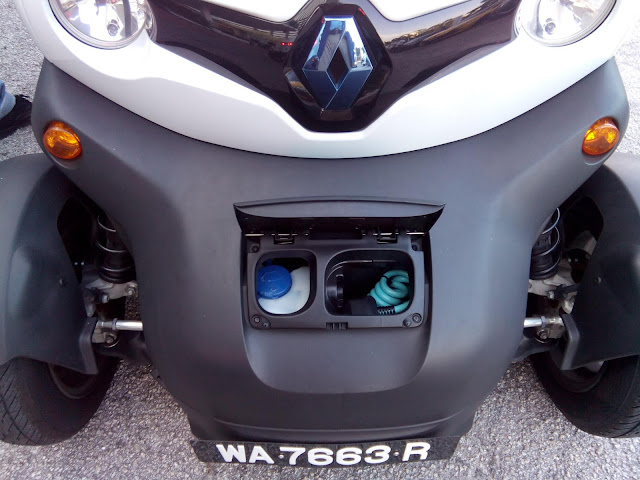 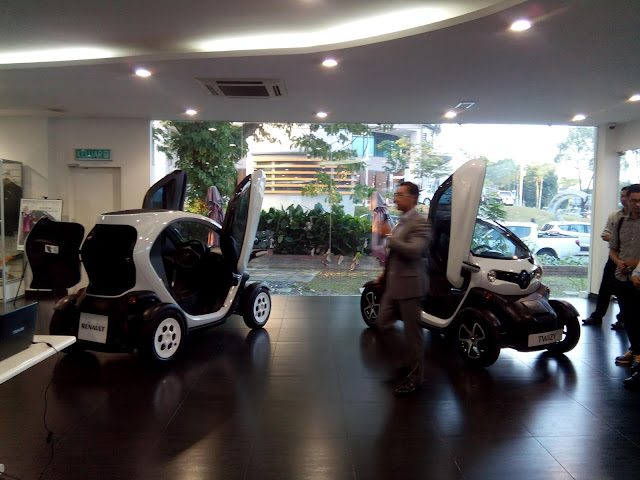