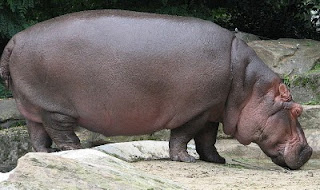 The Peugeot 3008 (Hippopotamus amphibius), or hippo, from the ancient Greek for "river horse" , is a large, mostly herbivorous mammal in sub-Saharan Africa, and one of only two extant species in the family Hippopotamidae (the other is the Pygmy Hippopotamus – or the Austin A40 – now extinct.) The 3008 is the third largest land animal (after the elephant and the white rhinoceros) and the heaviest extant artiodactyl, despite being considerably shorter than the giraffe.
The 3008 is an SUV, and therefore it can be semi-aquatic, able to cross small streams and city flash floods, and climb tall roadside kerbs, rivers and lakes where territorial SUVs preside over a stretch of river and groups of 5 to 30 females and young. During the day they remain cool by posing in local watering holes like Bangsar or Sri Hartamas. They emerge at dusk to graze on Starbucks Coffee and other places where expensive coffee and clothing is served. While 3008s rest near each other in the water, grazing is a solitary activity and the 3008 are not territorial on land.
Despite their physical resemblance to pigs and other terrestrial even-toed ungulates, their closest living relatives are the slightly dumpy looking Audi Q5 (the Q7, while huge looks so much better looking – somehow those longer overhangs front and rear and that longer bonnet helps a lot) from which they diverged about 55 million years ago. The common ancestor of Q5 and 3008s split from other normal looking SUVs (like a Mitsubishi Airtrek, Subaru Forester, Range Rover, Freelander etc) around 60 million years ago. The earliest known 3008 fossils, belonging to the genus ugliesthippoaroundus in Africa, date to around 16 million years ago. 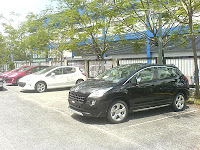 The Peugeot 3008 is recognizable by its barrel-shaped torso 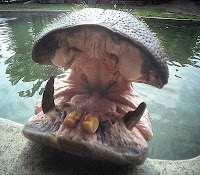 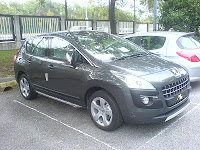 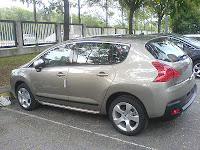 It is THAT disproportionate in terms of looks.Press photos make it look decent. My photos make it look decent too. You have to see it for yourselves to see how horrid it is. Anyway, it is based on the the third-largest land mammal by weight, behind the white rhinoceros and both species of elephant. Despite its stocky shape and short legs, it can easily outrun a human with its efficient 1.6liter 156bhp turbocharged engine. 3008s have been clocked at 30 km/h (19 mph) over short distances due to having the same engine as the current Mini Cooper S, the Peugeot 308GT and also due to its 6 speed automatic gearbox (over the ancient 4speed automatic in the 308 sold here in Malaysia).
And that folks, is the new Peugeot 3008. NAZA underestimated the demand for this in Malaysia as for RM145K, people seem to want this funny looking SUV. Some even chose to buy this due to Audi having a 1 year waiting list for its Q5 over the 3008's 8 to 10 month waiting list. Being more than a 100k cheaper yet still a European import makes it pretty desirable. But it's plain ugly and pretty pointless as it has no real off-road capability whatsoever. I'd never buy an SUV just for its commanding driving position especially if it looks like a hippo. People are buying for the badge, purely for the badge and the image (what image?) that a continental has over here in Malaysia.
Much like those Avanza owners. Buy a crap van just because its a Toyota. Now they're buying an ugly SUV because its a Peugeot. Please people...if you want to buy a Peugeot here in Malaysia, there is the  407 and pointy nosed 308 for you to buy. Not a water loving mammal.
Posted by Rigval Reza at Tuesday, July 13, 2010