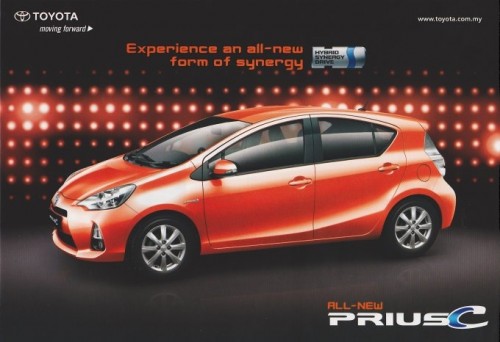 The Lack of Articles........is caused by lots and lots of travelling throughout the last month or so.

Things should get back to normal soon. But do not ask me when as I am unpredictable. Now isn't that a good excuse to use.

Anyway, I do have something to say about one car I recently sat inside, the Toyota Prius C. The 'C' does not stand for 'Compact'. It stands for something else. I have never sat in a car from the year 2012 that felt like it came from a Datsun 120y from the 1970s.

Yes it's a Toyota but a Toyota that's meant to save the world isn't meant to have the cheapest plastics ever to grace a modern car. There is nothing nice to touch in the car. Maybe the signal and light stalks are decent but the rest is pure crap. The steering wheel plastic. The dashboard and door panels are the same. In fact the fabric used for the seats are uninspired to look at. It does have the close fit of any Toyota but the materials used are from a Toyota of the 1970s.

I know that hybrids or eco-friendly cars must be shown to be utilizing recyclable materials and somehow must also be shown as a 'vegan'. How can a car be a vegetarian you may ask? It's simple. The Prius C is sold at RM100,000 or thereabouts. At RM100K most cars in Malaysia come with a nice leather wrapped (or faux leather) steering wheel that is nice to hold. This Prius C does not have one. It must be a vegetarian. It does not have any cow or any sort of animal anywhere in it and even its plastics look like brittle bits. A lack of 'bone density' caused by a lack of calcium. Anyway I am babbling over here. The plastics are just rubbish to the touch.

I also have to add that the car's uninspiring interior is match by its exterior. At least the full-fat Prius looks like something different. This one looks like a Perodua Alza that has been slightly shortened and added arches from the Perodua/Daihatsu Myvi/Sirion. In fact I have to add that the Myvi looks better. In fact the Myvi also has a better interior that the Prius C. This car should not be sold on the pretext that it can save the world. All that it seems to be doing is saving some production costs for Toyota.

It's rubbish. If anyone wants to save the world may I suggest the Honda CRV? It looks and feels so much better. When you sit in one you'd also want to try save the world.  It's decent for a hybrid. I should know. A few of my acquaintances have plonked their hard earned cash for it.

And oh yes, the 'C' in the Toyota Prius C stands for Cheap-as-hell-and-I-wouldn't-buy-it-even-if-the-Hounds-of-hell-are-biting-at-my-feet.
Posted by Rigval Reza at Thursday, May 31, 2012