Ramadhan Musings, the Perodua Nautica's a failure and the Daihastu Copen

It’s the month of Ramadhan or the month of Fasting for Muslims all over the universe. Now things usually slow down to a crawl’s pace if you’re dealing with the Government as everyone is tired, sleepy, thirsty and hungry. This happens in a country where there is a large Muslim population. But all the better, the pace slows down. There are less queues at most payment counters, there are more parking spots around my office building, there are also less people on the roads during lunch time too.
There are however more traffic jams at around 5.00pm or so as everyone wants to get home at the same time. There is an increase in sugar consumption as everyone buys kuih that is sold at those “Params”, which is actually short for ‘Pasar Ramadhan’ or the Ramadhan food market. Where Malaysians from all walks of life buy all sorts of Malay food sold there. By Malaysians I mean everyone. Not only those that are fasting mind you.
Anyway, this is also the time where I don’t frequent these places. The food sold there isn’t actually that fabulous. Most are cooked with less passion and soul than the people at Proton assembling the Saga. Most are selling food for the sake of making money. Which is why the food from some of these stalls are truly and deeply horrific. Which is the reason I now refuse to go to these ‘Params’ unless my life depended upon it. Food that is prepared without passion is somehow less tasteful.
But since you can get food almost everywhere, and if you’re like me, able to whip up food that Jamie Oliver would be proud of and the added bonus of a wife that can really cook. Why bother going to these passionless food stalls. If it’s a restaurant I wouldn’t mind, as they’re in this business for the long run. They’ve got a reputation to maintain.
Yes there are those that actually have restaurants but sell their stuff at these ‘Params’, but why do you want to suffer the haphazard traffic and parking caused by those inconsiderate buffoons who think that they’re the only ones who are fasting and cause a traffic jam? Just cook your own, or buy from a proper restaurant. The food is healthier, better and you know where it is from. 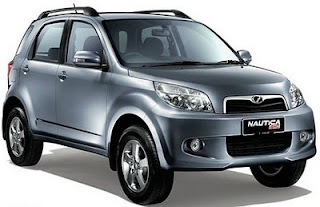 Anyway, have any of you seen a Perodua Nautica (nee Daihatsu Terios/Toyota Rush) on the road lately? Well I haven’t. I suppose Perodua only sold seven of them since 2008. Now I remember the smart Alec people in Perodua at the point of the Nautica’s launching telling the press that we have to import and sell the Nautica at a premium price due to the small volume of sales. See what happened? No one wanted a RM90k SUV that was tiny.
One other really glaring reason was the Toyota Rush. brought in the Indonesian Rush which is basically a 2WD long wheel based version of the Rush/Daihatsu Terios. This car had more space, better trimming and was almost cheaper than the fully imported 4WD Nautica. While imported, it did feel cheaper as there were no plastic trimmings on the wheel arches and the interior was plainer. Perodua brought in a pretty basic vehicle and wanted people to pay a lot for it.
The Toyota Rush had 2WD. But no one actually bought a Nautica or the previous Kembara for its off-road capabilities. Malaysians wanted a cut price RAV4. This is all. The tall driving position was favored by the women as it enabled them to drive in the city with ease. Unintimidated by other drivers around them. This had nothing to do with the Nautica’s capabilities at all. And then you add the fact that Malaysians think of resale value and branding, where seems to come up better than Perodua in both areas you now know why the Rush keeps selling and the Nautica didn’t. 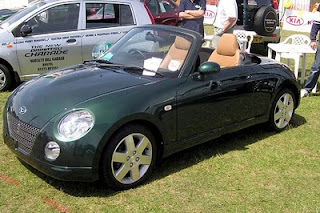 So this was niche marketing and product sales that had basically failed. But I am suggesting that Perodua ‘Think Niche’ again. This time bring in that Daihatsu Copen and rebadge it as a Perodua. The Copen has been around for a while already (since 2002) and it is a nice small starter ‘coupe’ for Malaysians. If you think about it that is.
Imagine Perodua bringing this tiny, tiny coupe into Malaysia. Use the Myvi 1.3liter engine like the European versions of the Copen and you have a cheap to maintain little coupe. The mechanical parts are shared and only the body parts are different. Since the car has been in production for a while in Japan, parts for this car could be cheaper already. I mean this little car costs slightly more than the Terios (about SG$95k over sg$85k) in so it could be sold at around the same RM90k that Perodua was asking for the Nautica.
Yes, I am well aware that Top Gear said the Copen is ‘slightly gay’ but it is a sports coupe. It is a niche vehicle. It is cute. Lots of Malaysian women would want one. The fact that the car sits two is immaterial as no one actually buys a Nautica as a family car in the first place. I usually see one or two people in a Kembara usually.
In fact, if it is cheap, there would be quite a few men who would buy this as their weekend car. They’ll make it a little butch by changing the rims and tires. Put in a noisier exhaust system. They’ll also slap on those stickers here and there to try making it into a race car lookalike. Take a look at this slightly modded Copen below and then tell me it doesn’t look good eh? (pic:bespokeventures.com) 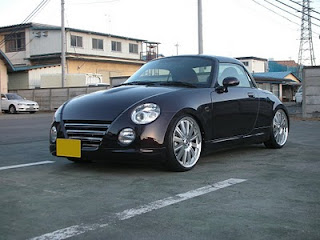 I mean, when was the last time a Malaysian company produced something really sporty looking? I wouldn’t call the Satria Neo CPS to be something truly sporty. It is a warm hatch. But does it look unique? In fact the last quite unique looking Malaysian car was the Putra. Think about it. Two doors, a boot. Very coupe. Not very Hot Hatch like. While a hot hatch is nice to drive, a road presence of a coupe is nicer.
So no matter how ginger beer, hairdresser’s car, girly or tiny looking the Copen is. I believe that this car would be a great addition to Perodua’s stable. Hello, anyone from Perodua reading this? Import the Daihatsu Copen in and sell it for RM90k. And people will buy.
If it doesn’t sell, well, at least you’re willing to bring some life into a quite dull and normal Malaysian car industry. Unlike the Nautica that is.
Posted by Rigval Reza at Thursday, August 19, 2010